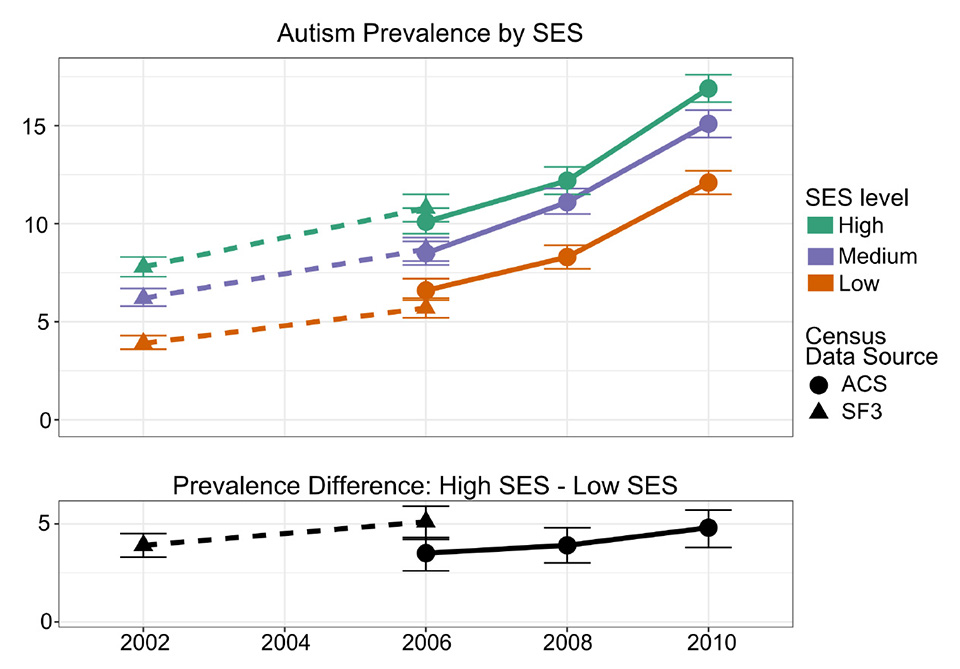 Abstract: Objectives: To describe the association between indicators of SES and the prevalence of ASD in the United States during the period 2002 to 2010, when overall ASD prevalence among children more than doubled, and to determine whether SES disparities account for ongoing racial and ethnic disparities in ASD prevalence. Methods: We computed ASD prevalence and 95% confidence intervals (CIs) from population-based surveillance, census, and survey data. We defined SES categories by using area-level education, income, and poverty indicators. We ascertained ASD in 13,396 of 1,308,641 8-year-old children under surveillance. Results. The prevalence of ASD increased with increasing SES during each surveillance year among white, black, and Hispanic children. The prevalence difference between high- and low-SES groups was relatively constant over time (3.9/1000 [95% CI = 3.3, 4.5] in 2002 and 4.1/1000 [95% CI = 3.6, 4.6] in the period 2006–2010). Significant racial/ethnic differences in ASD prevalence remained after stratification by SES. Conclusions: A positive SES gradient in ASD prevalence according to US surveillance data prevailed between 2002 and 2010, and racial and ethnic disparities in prevalence persisted during this time among low-SES children. (Am J Public Health. 2017;107:1818– 1826. doi:10.2105/AJPH.2017.304032)

About the Lab: Durkin’s research interests include the epidemiology, prevention, antecedents and consequences of neurodevelopmental disabilities and childhood injuries, both globally and within the United States. She has collaborated in the development of cross-cultural methods for screening for developmental disabilities and methods for surveillance of childhood injuries, and has directed international studies of the prevalence and causes of neurodevelopmental disabilities in low income countries. Durkin has also directed a cohort study of neuropsychological outcomes of neonatal brain injuries associated with preterm birth and with metabolic disorders detected on newborn screening and is currently a principal investigator on the Wisconsin Surveillance of Autism and Other Developmental Disabilities System.