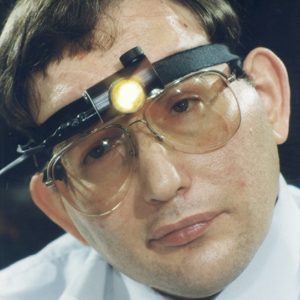 Mayor Paul was a graduate of Rutgers University, working in the VISTA program, teaching history to inner- city students when he was involved in an auto collision in 1974. Mayor suffered severe damage to his brain stem that left him quadriplegic and unable to talk or swallow. Now called locked-in syndrome, his condition was almost unprecedented at that time since few had survived such devastating injury. With no established therapies to turn to, Mayor and his parents had to create a treatment program through their own investigations and efforts. In 1977 and 1978, Mayor and his family came to the Waisman Center to work with professionals at the Trace Center and Communication Aids and Systems Clinic (CASC) to establish an alternative communication modality for him. Thanks to the dedicated efforts of the CASC and Trace Center team, Mayor was able to use a head light to spell out messages on a letter board. His improved ability to communicate allowed him to live a more independent and fruitful life. He traveled widely, took continuing education courses at his local college in southern New Jersey, volunteered at an elementary school, and was featured in numerous media stories detailing his accomplishments and the legal precedents set by his continuing battles with insurance companies to maintain his independence in his own residence. In 1990, Mayor received the prestigious Individual Achievement Award for Persons with Communication Disabilities from the American Speech-Language-Hearing Foundation, which was presented at the Kennedy Center in Washington, D.C. That same year, he established a college scholarship for graduates of Vineland High School, his alma mater. Until his death at the age of 50, Mayor maintained an active life, wintering in Miami, spoiling his niece and nephews and continuing his volunteer work and contributions to his community. This lecture series commemorates his courage and determination.