About the Lecture Series:

The Harry A. Waisman Memorial Lectures are presented by the Friends of the Waisman Center in conjunction with Waisman Center faculty and staff. These lectures feature outstanding scholars in the behavioral and biomedical fields. 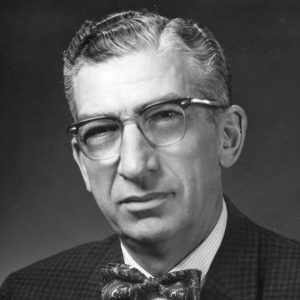 Waisman joined the University of Wisconsin faculty in 1952 as an associate professor of pediatrics and was promoted to professor in 1958. He became director of the Joseph P. Kennedy, Jr. Memorial Laboratories for research in developmental disabilities in 1963. The laboratories grew from an initial grant from the family of President John F. Kennedy, which Waisman was largely instrumental in obtaining.

In association with Harry Harlow and the UW Primate Laboratory, Waisman conducted groundbreaking research on phenylketonuria (PKU). Waisman’s research centered chiefly on this hereditary disease, in which an inborn metabolic error results in an accumulation of the amino acid phenylalanine and its derivatives, causing developmental disabilities. When detected early enough by a simple test, PKU can be treated effectively with a low-phenylalanine diet. Waisman was an advocate for PKU testing during legislative battles in the 1960s.

Prior to his work, Waisman was involved in studies related to cancer and leukemia in children. He co-authored a book with Conrad A. Elvehjem, a fellow biochemist and the former president of UW-Madison.

Waisman was a member of numerous professional and honorary societies and was awarded many national honors for his pediatrics work. He was one of the driving forces in the establishment of a multidisciplinary center at UW-Madison dedicated to the study of human development and developmental disabilities. He died unexpectedly during surgery in 1971, two years before the Waisman Center opened.