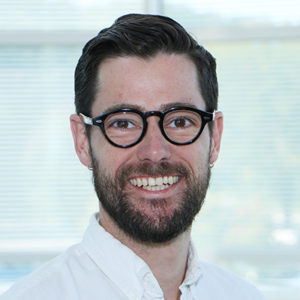 I study speech production, focusing the relationship between the abstract, cognitive system (language), speech motor behavior, and brain function. Speech production is perhaps the most complicated motor activity humans produce, requiring control of a complex neuromuscular system to produce movements that achieve millimeter-level precision and that are coordinated with millisecond-level accuracy. Moreover, these movements are not produced just to reach some target position in space at a particular time; rather, multiple movements must be controlled together to convey a linguistic, communicative message. Despite this complexity, healthy speakers are able to produce speech fluently and effortlessly. My research has three main branches:

I have other projects on the use of feedforward and feedback systems in speech motor control, control of time and movement duration in speech, and feedback control in motor systems more generally.