Alexander disease, a leukodystrophy, is a progressive and usually fatal neurological disorder in which the destruction of white matter in the brain is accompanied by the formation of abnormal deposits known as Rosenthal fibers. Rosenthal fibers are aggregations of protein that occur in astrocytes, which are cells that support the brain. These protein collections are found occasionally in other disorders, but not with the abundance or particular distribution in the brain that occurs in Alexander disease. 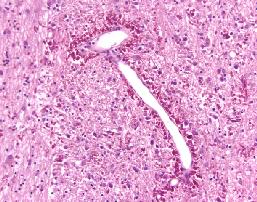 The most common form of Alexander disease is the infantile form, which usually becomes apparent during the first two years of life. Typically, there are both mental and physical developmental delays, followed by loss of milestones, an abnormal increase in head size, and often seizures. The juvenile form of Alexander disease is less common and generally has onset between the ages of four and 15. These children may have excessive vomiting, difficulty swallowing and speaking, poor coordination, and loss of motor control. Survival is quite variable, with rare juvenile cases surviving several decades. Adult-onset forms of Alexander disease exist, and are sometimes confused clinically with multiple sclerosis or Parkinson’s disease. The disease occurs in both sexes and there are no ethnic, racial, geographic, or cultural/economic differences in its distribution.

Recent discoveries show that most patients (~90%) with infantile Alexander disease have a mutation on chromosome 17 in the gene for glial fibrillary acidic protein (GFAP). GFAP is a filamentous protein of astrocytes and also accumulates as part of the Rosenthal fibers. The site of the mutation on the gene varies, and it occurs on only one of the two copies of each gene that is present in every cell. How these mutations cause Alexander disease is not presently understood. In studies on parents of affected children, no parent has been found to have the GFAP mutation present in their child (the exceptions being some of the adult-onset families where the affected individuals live to reproductive age and transmit the disease in an autosomal dominant fashion). Thus, in most cases, the mutation is not inherited, but arises spontaneously for unknown reasons. Not every patient with Alexander disease (proven by biopsy or autopsy diagnosis) has an identified mutation in GFAP, so there may be other genetic or perhaps even non-genetic causes that have yet to be discovered.

At present, Albee Messing, PhD, VMD and his lab at the Waisman Center are actively engaged in developing accurate animal models of Alexander disease. Mice engineered to carry mutations in GFAP identical to those found in Alexander disease patients also develop Rosenthal fibers, but do not display all of the features of true Alexander disease. However, it appears as if elevation of GFAP levels above a “toxic” level is a key step in disease, and leads to early death in mouse models.

Current Waisman Center research is aimed at understanding the mechanisms by which the mutations act to cause disease, and identifying other genetic loci that influence severity of disease. In addition, researchers are screening libraries of FDA approved drugs to devise novel therapeutic strategies for treatment of this disorder, and are attempting to identify biomarkers in blood or cerebrospinal fluid that would permit monitoring of severity or progression of the disease.