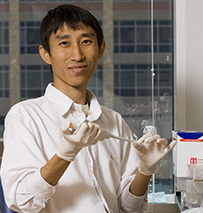 Rett syndrome is a rare postnatal neurological disorder, first recognized in infancy, which occurs more frequently in girls than boys. Rett syndrome causes problems in the parts of the brain that control learning, speech, movement, cardiac and pulmonary function, as well as chewing, swallowing, and digestion. Rett syndrome strikes all racial and ethnic groups, and has an estimated prevalence of one in 10,000-15,000 girls. It the second most common cause of intellectual disability in females.

Rett syndrome is caused by mutations on the X chromosome in a gene called MeCP2. MeCP2 plays a central role in interpreting the changes in the genetic code of DNA methylation and regulating chromatin remodeling and gene transcription. There are more than 200 different mutations found in the MeCP2 gene.

Our long-term goal is to understand the molecular mechanism underlying DNA methylation-dependent epigenetic regulation of brain functions.  Our current focus is on the central role of MeCP2 (methyl-CpG binding protein 2), a molecular linker between DNA methylation and chromatin remodeling and transcriptional control, in the development and function of the nervous system.  The functional significance of such a molecular linker is highlighted by the fact that mutations in the MECP2 gene cause Rett syndrome (RTT), a debilitating neurodevelopmental disorder that shares many features with autism.  Naturally, our studies include basic research aimed at understanding the function of MeCP2 and translational research aimed at understanding disease pathology and developing effective treatment.  These two types of research are tightly interwoven, because on one hand, the need to solve a practical problem in translational research will always influence the direction of basic research; and on the other hand, fundamental mechanisms revealed by basic research will ultimately guide the effort in treating/curing the disease.  Below are some highlights of our effort on both fronts.

In general, we use genetic engineering in mouse embryonic stem (mES) cells to manipulate the function of Mecp2 in vivo, and integrate analyses at the molecular, cellular, electrophysiological, animal behavioral, and genomic levels to study these genetically engineered mice.

To understand what functional role DNA methylation-dependent epigenetic mechanisms may play in the development, maintenance and function of the mammalian nervous system, it is important to study how the recognition of DNA methylation and the interpretation of this epigenetic information by MeCP2 may be dynamically regulated in neuronal nuclei in response to extracellular signals.  Several lines of evidence suggest that neuronal activity-induced phosphorylation (NAIP) of MeCP2 may work as a molecular switch on the chromatin to integrate the extrinsic signals with intrinsic transcriptional programs and generate adaptive outputs.  Yet it was not clear what, if any, function requires such phosphorylation in the in vivo brain.  We generated the Mecp2S421A;S424A knockin mice to abolish NAIP of MeCP2, and provided the first genetic evidence that NAIP of MeCP2 is involved in regulating several important functions in the in vivo brain, including promoter occupancy, gene transcription, excitatory synaptogenesis, long-term potentiation, and learning and memory (Li et al, 2011).

A novel role of MeCP2 phosphorylation in regulating adult neurogenesis

We discovered that S421 is also phosphorylated in adult neural progenitor cells (aNPC) isolated from the hippocampus.  Interestingly, the stimulus, the regulation and the function of S421 phosphorylation in aNPCs are completely different from those in post-mitotic neurons.  In aNPCs, MeCP2 S421 phosphorylation is induced by growth factors, linked to cell cycle, directly regulated by aurora kinase B, and plays critical roles in regulating the proliferation and differentiation of aNPCs through the Notch signaling pathway.  These new findings further generalize MeCP2 phosphorylation as a common regulatory module in cellular functions. (Li et al, 2014).

Together with our unpublished results, these findings raise the possibility that dynamic phosphorylation states at multiple sites on MeCP2 may form a combinatorial code, presenting another epigenetic regulatory module in addition to DNA methylation and histone codes.  To directly test this hypothesis, we are in the process of generating several novel Mecp2 knockin alleles carrying combinations of point mutations that either abolish or mimic phosphorylation at S80 and S421, and study the functional output of each combinatorial code in the well-established paradigm of adult neurogenesis.  In addition, we plan to combine our mouse genetics expertise with cutting edge genomic and proteomic technologies to reveal the genome wide distribution of MeCP2 and its interacting partners, and how such distributions and interactions are regulated by stimulus-induced post-translational modification of MeCP2.

We have used the Mecp2 knockout mice to test the therapeutic potential of candidate drugs.  Recently, to complement our in vivo mouse models, we have generated congenic pairs of iPSC lines from several female RTT patients carrying either common or rare RTT mutations, differentiated both the mutant and wild type iPSC lines into neurons and astrocytes, and observed characteristic RTT phenotypes in these cells.

Following up our earlier discovery that BDNF (brain-derived neurotrophic factor) is a key modulator of disease progression in a RTT mouse model (Chang et al, 2006),  we evaluated the therapeutic efficacy of 7,8-dihydroxyflavone (a selective agonist of TrkB, the high affinity BDNF receptor) in a RTT mouse model, and showed that it could alleviate several hallmark RTT symptoms (Johnson et al, 2012).  These results suggest that 7,8-dihydroxyflavone have therapeutic a potential for treating RTT.

Because of potential differences in the underlying biology between humans and common research animals, there is a need to establish cell culture-based human models for studying disease mechanisms to validate and expand the knowledge acquired in animal models.  Taking advantage of the nonrandom pattern of X chromosome inactivation in female induced pluripotent stem cells (iPSC), we have generated congenic pairs of wild type and mutant iPSC lines from several female RTT patients with common and rare RTT mutations.  R294X (arginine 294 to stop codon) is a common mutation carried by 5-6% of RTT patients.  We differentiated three R294X iPSC lines and their congenic wild type control iPSC into neurons with high efficiency and consistency, and observed characteristic RTT pathology in R294X neurons.  These congenic iPSC lines provide unique resources to the RTT research community for studying disease pathology, screening for novel drugs, and testing toxicology (Ananiev et al, 2011).

Most recently, we have differentiated three congenic pairs (V247X, R294X and R306C) of RTT iPSC lines into highly pure astrocytes, and studied the glial contribution to RTT pathology.  Our data showed that mutant astrocytes and the medium conditioned by mutant astrocytes had adverse effect on the growth and morphology of wild type neurons.  These results fully validate previous finding in RTT mouse models, and further establish human RTT iPSCs and its derivatives as valid in vitro disease models for studying pathogenesis and screening for drugs (Williams et al, 2014).

We are using the astrocytes differentiated from congenic RTT iPSC lines to study cell autonomous phenotypes and the underlying mechanisms in RTT astrocytes, and develop this platform for future drug screens.  Once we identify candidate drugs using our in vitro platform, we will validate the top ranked ones in our RTT mouse models in vivo.  Results from these studies will ultimately help finding an effective treatment/cure for RTT.