Fragile X syndrome (FXS) is the leading inherited cause of intellectual disability, as well as the source of many cases of learning disabilities and autism. The syndrome affects both males and females, although males are typically more severely affected. In addition to learning difficulties, children with FXS often suffer from hyperactivity, social anxiety, hypersensitivity to sensory stimuli, and autism and autistic-like behaviors, all of which limit their social and academic progress, create challenges for teachers, and are a source of stress and uncertainty for their families. 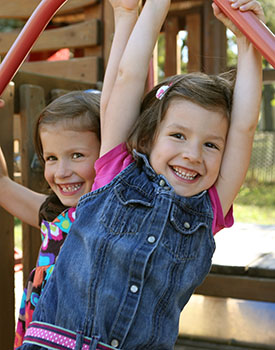 FXS is caused by a repetitive genetic error on the long arm of the X chromosome. The mutation is in a single gene called FMR1. A small set of nucleotides (the building blocks of DNA) are repeated excessively, disrupting the structure of the gene and preventing the production of its normally encoded protein called FMRP. The mutation is passed through families and can occur more frequently or severely in future generations.

It is estimated that more than one in 4,000 males and one in 8,000 females have the fragile X gene mutation. Many more people, however, have the premutation–an unstable version of the FMR1 gene that can transform into the full mutation in future generations. Scientists previously thought that people who carry the premutation are unaffected. Recently, it has been found that carriers of the premutation are at greater risk for a neurodegenerative disorder resembling Parkinson’s disease called Fragile X-associated Tremor Ataxia Syndrome. Women with the premutation are also at increased risk for Fragile X-associated Primary Ovarian Insufficiency including early menopause. There is evidence that the premutation may increase vulnerability to stress and affective challenges. As many as one in 250 women and one in 500 men in the general population carry the premutation, making the FMR1 premutation a significant public health concern affecting more than one million Americans.

The gene that causes FXS was discovered in 1991 and scientific advances have been rapid ever since. Pharmaceuticals are being tested with the hope of alleviating symptoms of the syndrome and eventually finding a cure. Scientists at the Waisman Center contributed significantly to our current understanding of the causes, consequences, and treatments of this disorder. These scientists conduct research in human and non-human species and at all levels of analysis, from studies of the biochemical properties of the gene to studies of learning and behavior in affected individuals and the impacts on other family members.

Xinyu Zhao, PhD, examines the function of FMRP in neurogenesis—the process of generating neurons—and how FMRP deficiency leads to learning deficits in mouse models of FXS. Her findings suggest that promoting neurogenesis during the postnatal period may have therapeutic potential for individuals with FXS and other neurological disorders.

Anita Bhattacharyya, PhD, uses iPS cells to study how and when brain development is altered in developmental disorders such as FXS. She uses disorder-specific iPS cells to generate neurons that can be used to study the process of neural developmental in FXS. Bhattacharyya works with other Waisman Center investigators to distinguish attributes of FXS and the fragile X premutation neurons from typically developing neurons.