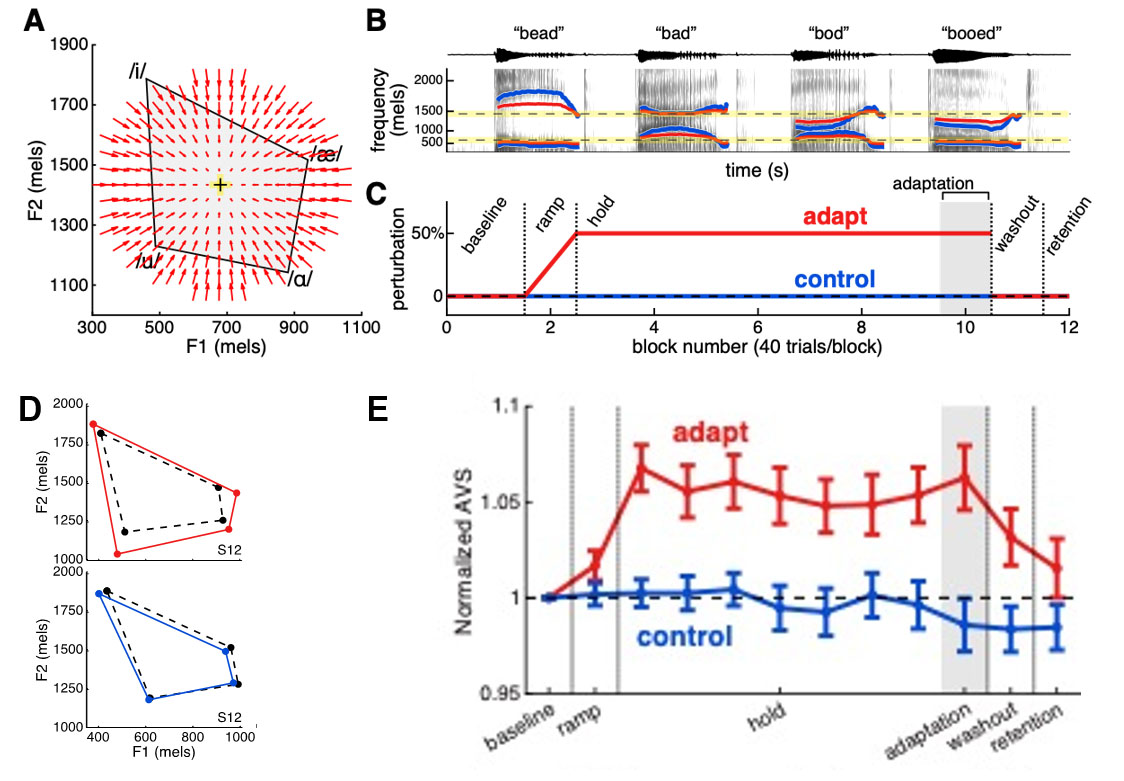 Legend: A non-uniform perturbation of auditory feedback causes speakers to increase the contrast between vowels. A: A diagram of the perturbation, which pushed all vowels towards the center of the vowel space, creating the perception of less distinctive vowels. B: Example data of the four stimuli words used, showing the original vowel formants the speaker produced (blue), the altered vowel formants the speaker heard (red), and the center of the vowel space (yellow). C: participants completed both a control session (blue) with no auditory perturbation and an “adapt” session (red), where the auditory perturbation was gradually introduced and maintained during an extended hold phase, before being removed to assess learning. D: Example data from one participant showing the change from baseline formant values (black) for the vowels in the four stimuli words at the end of the hold phase in the adapt (red) and control (blue) conditions. E: Group data showing average vowel spacing, a measure of vowel contrast. Means and standard errors from 25 participants are shown. Participants increased vowel contrast in the adapt session, but not the control session. This increase remained even after the perturbation was removed (washout phase) as well as after a 10-minute break (retention phase).

Abstract: When auditory feedback is perturbed in a consistent way, speakers learn to adjust their speech to compensate, a process known as sensorimotor adaptation. Typically, feedback perturbation experiments employ a transformation that targets a single vowel, or that affects all vowels in the same way, resulting in a uniform change across the vowel space. While this paradigm has been highly informative for our understanding of the role of sensory feedback in speech motor control, the ability of this technique to induce changes in speech that affect communication effectiveness remains unclear. Because reduced vowel contrast contributes to intelligibility deficits in many speech disorders, we examine speakers’ ability to compensate for a non-uniform perturbation field which was explicitly designed to affect vowel distinctiveness, applying a shift that depended on the vowel being produced. Twenty-five participants were exposed to this “vowel centralization” feedback perturbation in which the first two formant frequencies were shifted towards the center of each participant’s vowel space, making vowels less distinct from one another. Speakers adapted to this non-uniform shift, learning to produce corner vowels with increased vowel space area and vowel contrast to partially overcome the perceived centralization. The increase in vowel contrast persisted after the feedback shift was removed, including after a 10-minute silent period. These findings establish the validity of a sensorimotor adaptation paradigm to increase vowel contrast, showing that complex, non-uniform alterations to sensory feedback can successfully drive changes relevant to intelligible communication.