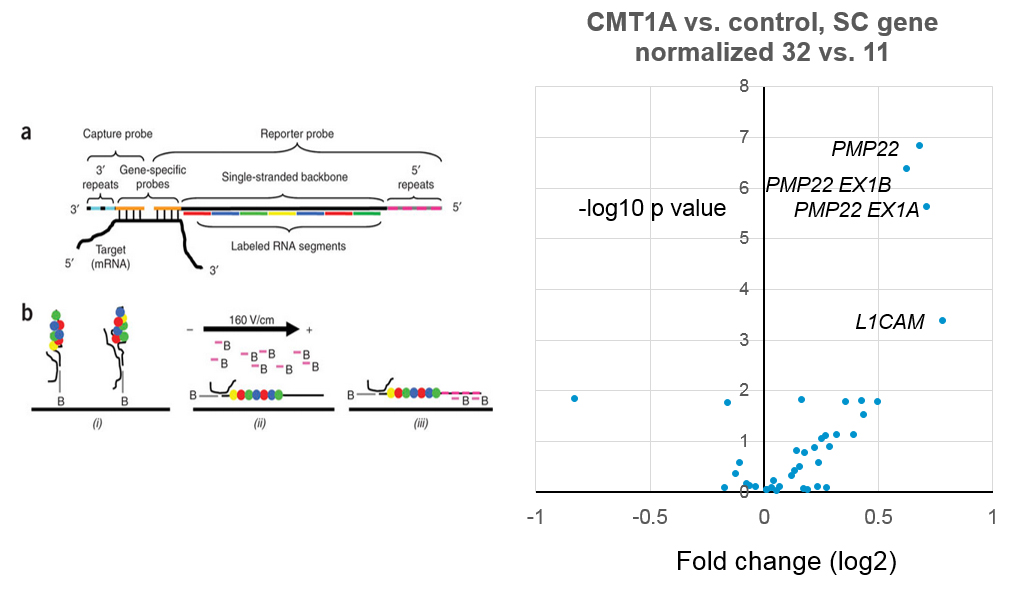 Abstract: Objective – Charcot-Marie-Tooth (CMT) disease is most commonly caused by duplication of a chromosomal segment surrounding Peripheral Myelin Protein 22, or PMP22 gene, which is classified as CMT1A. Several candidate therapies reduce Pmp22 mRNA levels in CMT1A rodent models, but development of biomarkers for clinical trials in CMT1A is a challenge given its slow progression and difficulty in obtaining nerve samples. Quantitative PCR measurements of PMP22 mRNA in dermal nerves were performed using skin biopsies in human clinical trials for CMT1A, but this approach did not show increased PMP22 mRNA in CMT1A patients compared to controls. One complicating factor is the variable amounts of Schwann cells (SCs) in skin. The objective of the study was to develop a novel method for precise evaluation of PMP22 levels in skin biopsies that can discriminate CMT1A patients from controls. Methods – We have developed methods to normalize PMP22 transcript levels to SC-specific genes that are not altered by CMT1A status. Several CMT1A-associated genes were assembled into a custom Nanostring panel to enable precise transcript measurements that can be normalized to variable SC content. Results – The digital expression data from Nanostring analysis showed reproducible elevation of PMP22 levels in CMT1A versus control skin biopsies, particularly after normalization to SC-specific genes. Interpretation – This platform should be useful in clinical trials for CMT1A as a biomarker of target engagement that can be used to optimize dosing, and the same normalization framework is applicable to other types of CMT.