The COVID-19 pandemic pivoted many daily life activities, such as work and school, to a home base. Healthcare was no exception. In March, the Waisman Center Clinics transitioned all of its services to telehealth appointments using phone and video platforms. The 10 interdisciplinary specialty clinics and the center’s autism treatment program, operated in partnership with UW Health, serve more than 8,000 children with a broad range of intellectual and developmental disabilities and their families each year. While unplanned, the migration to telehealth proved to have some unexpected positive outcomes for access to healthcare.

One of the clinics, the Waisman Center Medical Genetics Clinic, gathers data on no-show appointments or late cancellations. When the pandemic started, staff in the clinic noticed some positive results that seemed to speak to the favorability of adopting telehealth services.

“We saw a pretty remarkable improvement in show rates, which increases access to genetic services,” says clinic coordinator and genetic counselor Christie Turcott, MS, CGC. To everyone’s surprise, they found that between April and June, the clinic’s no-show/late cancellation rates dropped from 25 percent – which was the average for 2019 – to 13 percent.

When the stats were broken down further, there was little change in late cancellations but the no-shows decreased significantly.

“Even when you look at that, we’ve still cut our rates in half,” says Jess Scott Schwoerer, MD, director of the Medical Genetics Clinic.

The telehealth appointments run similarly in length of time to in-person visits, according to Scott Schwoerer – though there are a few slight modifications. “We have parents weigh and measure the kids for us and add to their growth chart,” she says. “We can observe the children to see physical or developmental changes.”

A rise in accessibility 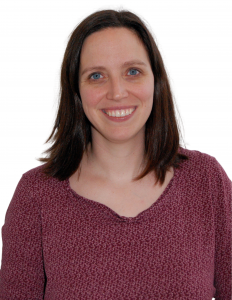 The Waisman Center Medical Genetics Clinic is an interdisciplinary clinic for people of all ages who have suspected or known hereditary conditions, malformation syndromes or birth defects. Medical geneticists and genetic counselors provide initial diagnostic and confirmatory services, care coordination, genetic counseling, and referral. Many families come from all over the state for the clinic’s specialized services.

This was the case for Kristen Peterson, a single mother of seven children, who was always on the go before the COVID pandemic. Six of Peterson’s children have special needs and are seen at the Waisman Center, an hour north of their home in Janesville.

Imagine getting seven kids ready and in the car to drive an hour each way for one of them to go to a doctor’s appointment. Then add to that picture additional challenges that accompany several of the children who have complex medical conditions and special needs. “It’s great not having to spend the money and the time on gas and driving,” Peterson says of the transition to telehealth.

Peterson’s experience is not unique.

“Access to genetic services in the state and even nationwide is difficult,” Scott Schwoerer says. There are less than 10 geneticists in the entire state and they are primarily located in the Madison, Milwaukee, and La Crosse areas. Families in more remote areas therefore do not have easy access to these services; patients drive up to four hours to be seen in the Medical Genetics Clinic.

Because the clinic’s patients are mostly children with special needs, Turcott says they are especially sensitive to disruptions in the families’ routines. “Patients are on the camera only as long as it’s
absolutely needed for the doctor to assess them and then they go back to whatever they were doing,” she says. “I think for parents, it’s a relief not to have to put their kid into a car, drive for hours and then have to deal with snacks, toys, and things to do during the visits.”

Peterson says that, as a multitasker, she is happy to be able to do other things during those appointments. “My youngest can be taking a nap while I have an appointment with one of the other kids and I don’t have to worry about waking them up,” she says.

Furthermore, the clinic is still able to use visual aids such as PowerPoint slides to explain complicated genetic information. “For some concepts in genetics, that’s really important to have,” says Waisman Center genetic counselor Sara Zoran, MS, CGC.

Scott Schwoerer adds that for families with spotty Internet connections, the clinic can flexibly move to phone appointments as well.

“We’ve been really pleased to see that our access has increased since the pandemic instead of decreasing,” Turcott says.

Scott Schwoerer describes the transition as a real crash course in telehealth, but it’s been something that the clinic has wanted to try for a very long time.

Unfortunately, Medicaid has not always covered telehealth services, but that changed thanks to a 2019 law that allows Medicaid to cover any service that had previously been available for in-person appointments. That law is a reason why the Waisman Center Clinics have been able to implement telehealth so quickly.

Turcott is also sensitive to the lack of connection that make in-person appointments preferable for some. “When there’s a particularly difficult session, either with bad news or a diagnosis, not being in the room does affect my ability to provide psychosocial counseling,” she says. “There are just some things that we can’t provide because we’re not physically there. But having some access is better than no access – especially in those difficult times for families.”

The Waisman Center Medical Genetics Clinic reopened again in July for in-person appointments with some slight changes. For example, parents are no longer allowed to bring anyone other than the patient to the appointment, which is difficult for families like Peterson’s.

“I’m a single mom with seven kids,” she says. “It makes it really hard to go to doctor appointments and not bring at least one other because most of them cannot be home by themselves.”

But despite the challenges, Peterson does describe telehealth services as “a great option” and, like Scott Schwoerer, advocates for a hybrid model between inperson and telehealth appointments going forward.

“It’s not a one-size-fits-all option any more for appointments,” says Scott Schwoerer. “Telehealth provides more options to meet the individualized needs of patients and their families.”