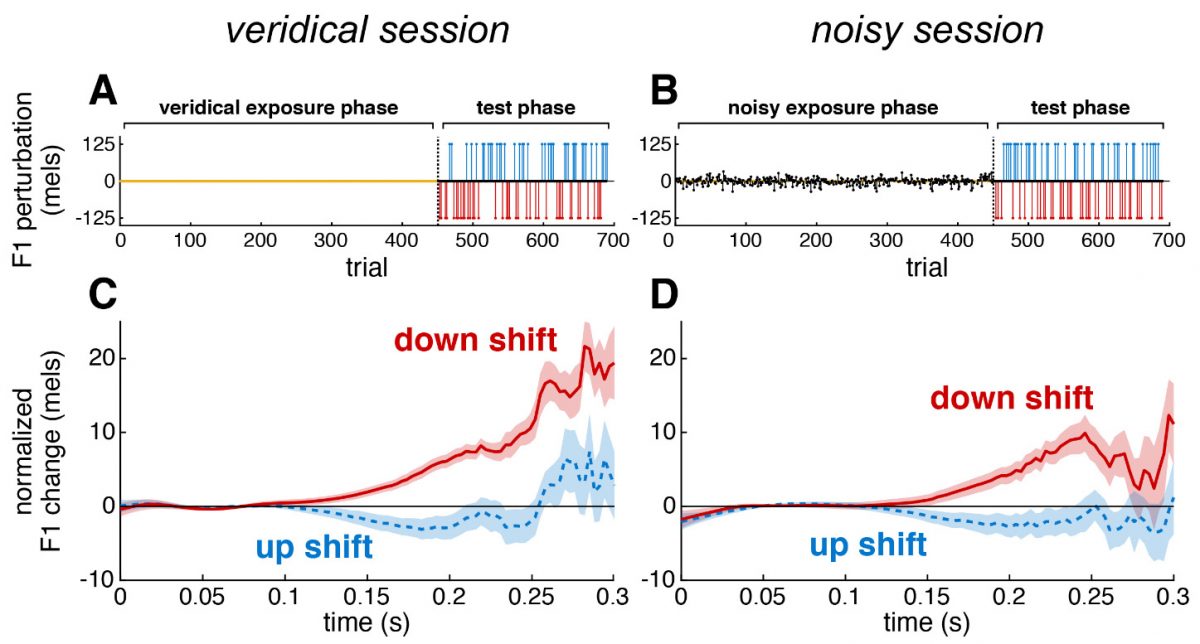 Title: Responses to auditory feedback manipulations in speech may be affected by previous exposure to auditory errors

Citation: Niziolek, C.A.* and Parrell, B.* (accepted). Responses to auditory feedback manipulations in speech may be affected by previous exposure to auditory errors. Journal of Speech, Language, and Hearing Research. *equal contribution

Abstract: Purpose – Speakers use auditory feedback to guide their speech output, although individuals differ in the magnitude of their compensatory response to perceived errors in feedback. Little is known about the factors that contribute to the compensatory response or how fixed or flexible they are within an individual. Here, we test whether manipulating the perceived reliability of auditory feedback modulates speakers’ compensation to auditory perturbations, as predicted by optimal models of sensorimotor control. Method – Forty participants produced monosyllabic words in two separate sessions which differed in the auditory feedback given during an initial exposure phase. In the veridical session exposure phase, feedback was normal. In the noisy session exposure phase, small, random formant perturbations were applied, reducing reliability of auditory feedback. In each session, a subsequent test phase introduced larger unpredictable formant perturbations. We assessed whether the magnitude of within‐trial compensation for these larger perturbations differed across the two sessions. Results – Compensatory responses to downward (though not upward) formant perturbations were larger in the veridical session than the noisy session. However, in post‐hoc testing, we found the magnitude of this effect is highly dependent on the choice of analysis procedures. Compensation magnitude was not predicted by other production measures, such as formant variability, and was not reliably correlated across sessions. Conclusions – Our results, though mixed, provide tentative support that the feedback control system monitors the reliability of sensory feedback. These results must be interpreted cautiously given the potentially limited stability of auditory feedback compensation measures across analysis choices and across sessions.

About the Lab: The Niziolek lab studies how the feedback system functions in persons with aphasia, many of whom have deficits in speech production and error awareness. They are developing laboratory studies of speech skill learning that can be translated to training interventions for speakers such as these who have trouble consistently producing auditory targets. The lab’s proposed training consists of vocal games that map speech to a real-time visual display. These visual speech training games have the potential to be adapted into tools to improve speech production in individuals with speech impairment, including deaf speakers and children with developmental speech and language disorders.