The fluorescent red on-air sign flicked on. The microphones crackled to life. Charlene Rivera-Bonet, PhD, Waisman science writer, and Lupita Montoto, La Movida radio host, made their final adjustments as the Facebook Live started recording and the opening music played across the airways. It was February 24, 2022 and listeners were tuning in for the first time to Las Maravillas del Waisman (The Wonders of Waisman) on La Movida, the greater-Madison area’s local Spanish radio station.

For the next hour, Rivera-Bonet and Montoto spoke with Qiang Chang, PhD, director of the Waisman Center, and Paola Perez, MSSW, social worker and Waisman Center clinics operations manager, about the Waisman Center and its broad range of research, resources, and services for individuals with intellectual and developmental disabilities and their families. The first show in the monthly series was promising and surprisingly engaging with people calling in to ask questions, share stories about their experiences with disability, and on a fun note, someone even invited Chang over for homemade ceviche.

Las Maravillas del Waisman is one of several initiatives by the Waisman Center to better connect and engage with the local Hispanic community to make the center’s information and resources more accessible to native Spanish speakers. Hispanics are the second largest ethnic group in Dane County, making up an estimated 6.5% of the population.

The show typically features a researcher and a clinician from Waisman and then a short section of resources at the end. Las Maravillas del Waisman partners with Tim Markle, director of the Southern Regional Center, and the Southern Regional Center to provide listeners with resources pertaining to the topic of the show that month. That way the show’s information is accompanied by actionable items.

The Hispanic community is an underserved community and often faces additional barriers to information, services, and supports related to intellectual and developmental disabilities – with language being one of those barriers. With the addition of Rivera-Bonet–who was born and raised in Puerto Rico and is a native Spanish speaker –to the communications team, Waisman hopes to start breaking down some of those barriers.

Part of Rivera-Bonet’s job, alongside her science writing duties, is to increase the accessibility of information and resources on intellectual and developmental disabilities to the Hispanic community. Waisman’s communications manager Teresa Palumbo thought that a radio show might be a good place to start.

Radio is among the top three ways Hispanic adults access information. “The radio is easy because it’s convenient – it doesn’t take time out of your day,” says Montoto. Understanding that this was a good avenue for conveying information and having the show be in Spanish on a well-established radio station that the community trusts, felt like a good starting line. Las Maravillas del Waisman also strives to feature native Spanish speakers from Waisman whenever possible. The show quickly revealed that there is a big need for disability-related knowledge in the Hispanic community.

“I think there’s a need for information, especially on topics such as disability. To learn the terminologies and the tools,” Montoto says. She runs La Movida alongside her husband and they are also parents to a son with autism.  “There are families that might not know they have a child with special needs and these programs help them understand why their kids might be behaving in a certain way.”

The radio show began to reveal the depth of need for information and resources on IDDs such as autism, Down syndrome, and cerebral palsy in the Hispanic community. After several shows, Rivera-Bonet started receiving phone calls. The Waisman Center was getting emails from Spanish-speaking families looking for information as well as someone to listen to their story. The Maravillas del Waisman show focused on autism had so many callers that half of the show was dedicated to just answering questions. This influx of questions and concerns underscored the need for more information on autism and also sparked the idea for a disability resource fair targeted to the Spanish-speaking community. The Waisman Center is working on coordinating the fair along with other community partners for summer 2023.

Rivera-Bonet continues to look for programming and opportunities to better serve the community. “I think our hope is that the radio show will be guided by the audience and it is not just us putting information out there,” Rivera-Bonet says. “Its important that we ensure that the information is what is actually needed, relevant, and specific for the community because every community is going to be different.”

The experience has so far been gratifying for Rivera-Bonet. She feels the radio show is making important strides forward, not just in connecting the Waisman Center with the Hispanic community, but in establishing partnerships with local and trusted community stakeholders. “We’ve hosted great researchers that are very engaging and work on interesting research that is relevant to the community. We’ve also been able to highlight resources for families, and brought experts in relevant topics such as summer safety and physical activity for children with disabilities. In general, it’s been an exciting and great experience and I hope that people who have been listening to the show have learned a lot as well.”

Bringing scientists and clinicians who are themselves Hispanic also helps build community trust and has a ripple effect of presenting Hispanic role models. Jose Martinez, a doctoral student in cellular and molecular biology who works in the Waisman lab of Anita Bhattacharyya, PhD, was a guest on the show, remembers a time when he visited Whitehorse Middle School to talk about neuroanatomy. “I heard some kids not paying attention to me talking in Spanish. So, I just busted out science in Spanish,” Martinez says. “One of the kids came up to me at the end and in Spanish asked, ‘so it’s possible for like me to be [a scientist] like you?’” An indirect effect of this radio program is representation. “You want to be visible [as a role model],” Martinez says.

Moving forward, Rivera-Bonet and the Waisman Center hope to continue to use Las Maravillas del Waisman as a platform to improve the accessibility of the center’s information and build a stronger and deeper relationship with the Hispanic community. “We hope that, little by little, the community becomes more familiar with the Waisman Center and sees us as an accessible and available resource,” Rivera-Bonet says. “And we are learning from this, too. We are learning what the needs of the community are and how we can better meet them. Las Maravillas del Waisman is our stepping-off point.” 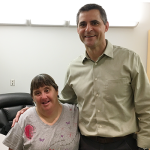 Thoughts of gratitude: The Dewey family is a catalyst of support for the Waisman Center 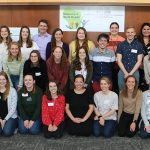 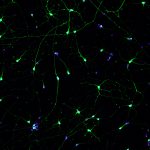 One mutation, many challenges: Unraveling the mystery behind fragile X syndrome

One mutation in a single gene, as straightforward as it may sound, can cause a broad range of symptoms and severity among those who carry it. This is the case for fragile X syndrome (FXS), the most common hereditary form of intellectual disability.