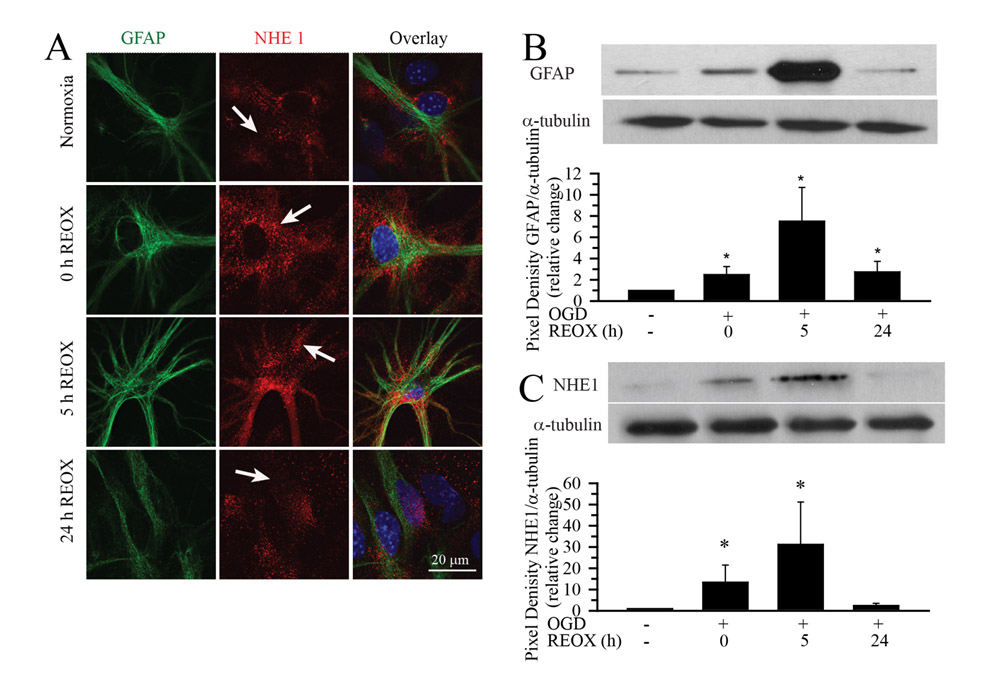 Legend: A.Expression of NHE1 protein in hippocampal astrocytes. Immunofluorescence signals of NHE1 and GFAP were shown under normoxia control or OGD (2 h) plus 0 h, 5 h, or 24 h REOX. Green: GFAP, red: NHE1 (arrows), blue: To-pro-3 nuclear staining. Scale Bar: 20 mm.  B, C. Quantification of GFAP (B) and NHE1 protein (C) expression with immunoblotting.  Hippocampal astrocytes were subjected to 2 h OGD followed by 5 or 24 h REOX. Total pixel density in each protein band (minus background) was calculated using Image J. Data are expressed as the ratio of either GFAP or NHE1 to the corresponding a-tubulin band and normalized to the control.  Data are mean ± SEM (n = 4).  * p < 0.05 vs. normoxia.

Abstract: Hypoxia ischemia (HI)-related brain injury is the major cause of long-term morbidity in neonates. One characteristic hallmark of neonatal HI is the development of reactive astrogliosis in the hippocampus. However, the impact of reactive astrogliosis in hippocampal damage after neonatal HI is not fully understood. In the current study, we investigated the role of Na+/H+ exchanger isoform 1 (NHE1) protein in mouse reactive hippocampal astrocyte function in an in vitro ischemia model (oxygen/glucose deprivation and reoxygenation, OGD/REOX). 2 h OGD significantly increased NHE1 protein expression and NHE1-mediated H+ efflux in hippocampal astrocytes. NHE1 activity remained stimulated during 1–5 h REOX and returned to the basal level at 24 h REOX. NHE1 activation in hippocampal astrocytes resulted in intracellular Na+ and Ca2+ overload. The latter was mediated by reversal of Na+/Ca2+ exchange. Hippocampal astrocytes also exhibited a robust release of gliotransmitters (glutamate and pro-inflammatory cytokines IL-6 and TNFa) during 1–24 h REOX. Interestingly, inhibition of NHE1 activity with its potent inhibitor HOE 642 not only reduced Na+ overload but also gliotransmitter release from hippocampal astrocytes. The noncompetitive excitatory amino acid transporter inhibitor TBOA showed a similar effect on blocking the glutamate release. Taken together, we concluded that NHE1 plays an essential role in maintaining H+ homeostasis in hippocampal astrocytes. Over-stimulation of NHE1 activity following in vitro ischemia disrupts Na+ and Ca2+ homeostasis, which reduces Na+-dependent glutamate uptake and promotes release of glutamate and cytokines from reactive astrocytes. Therefore, blocking sustained NHE1 activation in reactive astrocytes may provide neuroprotection following HI.

About the investigator: Cengiz’s research focuses on finding a novel therapy for neonatal encephalopathy subsequent to hypoxia ischemia. Hypoxia ischemia related brain injury is associated with high mortality and morbidity. One of every 3 neonates with HI develops chronic morbidity including cerebral palsy, intellectual and developmental disabilities, learning disabilities or epilepsy. Moderate hypothermia has been shown to improve the neurological outcome of term neonates. However, term neonates after 6 hours of life and pre-term neonates do not qualify for hypothermia therapy. Her research continues to focus on exploring a pharmacological therapy as an adjunct to hypothermia and for those neonates who are not eligible for hypothermia therapy. Cengiz is particularly interested in targeting membrane proteins that are either detrimental or beneficial to neuronal survival after hypoxia and ischemia. She is working both with in vitro and in vivo models of hypoxia and ischemia in order to identify the role of these proteins and its effects on neuronal degeneration. Using Vannucci-Rice¹s neonatal HI model in nine-day-old mice, she has shown neuroprotection at 72 hours after HI by pharmacologically inhibiting the membrane protein Na+-H+ exchanger isoform-1. Her goal is to establish the mechanism(s) that leads to hippocampal neuroprotection by characterizing the function of Na+/H+ exchanger protein isoform 1 after HI. Her ultimate goal is to translate these preclinical findings into clinical studies that will benefit patients with neonatal encephalopathy after hypoxia and ischemia.