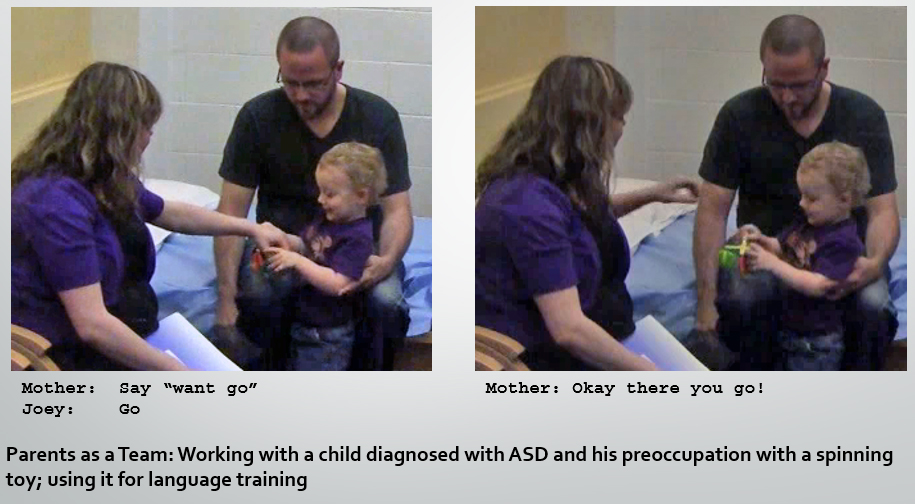 Title: Parents as a Team: Mother, Father, a Child with Autism Spectrum Disorder, and a Spinning Toy

Abstract: This paper is a single case study involving a visit to a diagnostic clinic for autism spectrum disorder. A young boy finds a toy that he can hold with one hand and spin with another. In order to retrieve the toy and leave it in the clinic, the parents engage in a team effort. We describe this achievement in terms of two styles of practice or interactional routines with differing participation frameworks. We describe the stylistic patterns of the parents and examine not only how the parents work as a team using these styles, but also how they improvise to extract the spinning toy from their son’s grasp with minimal protest on his part. Aggregate studies of families have shown the stress that is involved in raising a child with ASD as well as the adaptations that are made. Our study is one that shows what actually happens—the naturally occurring interactions—through which parents and child fashion orderly and goal-oriented routines.

About the Lab: The goal of the Maynard lab is to study the diagnostic process involving autism spectrum disorders. We have a grant from the National Science Foundation to study both the testing of children, the discussions whereby clinicians put their testing and other information together to decide on diagnosis, and then present the diagnosis to parents or others. For the testing part, we are interested in “directive-response” sequences, wherein clinicians are able to elicit cooperation necessary to delivering questions and getting answers, or to being able to observe how children act or react in different circumstances. For the diagnostic part, we are interested in the “narrative” means by which clinicians draw on clinical and other evidence to ascertain what kind of diagnosis (such as ASD) does or does not fit the profile of a particular child. Such diagnostic decision-making is not easy, in part because there are no bio-markers or other straightforward indicators that can be used. However, clinicians are skillful in the ways that they use the various kinds of evidence at hand, including their own tests, but also interviews with parents, information from schools, from pediatricians and elsewhere. Diagnosis is putting all the pieces together using narrative inquiry.