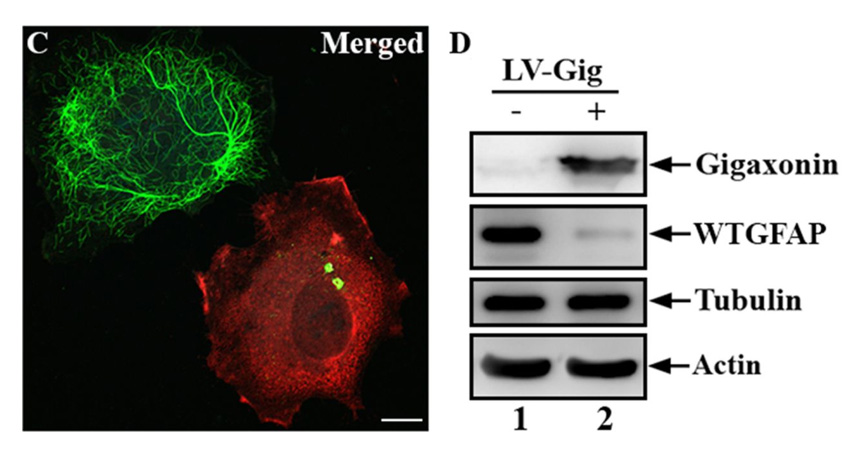 Abstract: Alexander disease (AxD) is a primary genetic disorder of astrocytes caused by dominant mutations in the gene encoding the intermediate filament (IF) protein GFAP. This disease is characterized by excessive accumulation of GFAP, known as Rosenthal fibers, within astrocytes. Abnormal GFAP aggregation also occurs in giant axon neuropathy (GAN), which is caused by recessive mutations in the gene encoding gigaxonin. Given that one of the functions of gigaxonin is to facilitate proteasomal degradation of several IF proteins, we sought to determine whether gigaxonin is involved in the degradation of GFAP. Using a lentiviral transduction system, we demonstrated that gigaxonin levels influence the degradation of GFAP in primary astrocytes and in cell lines that express this IF protein. Gigaxonin was similarly involved in the degradation of some, but not all, AxD-associated GFAP mutants. In addition, gigaxonin directly bound to GFAP, and inhibition of proteasome reversed the clearance of GFAP in cells achieved by overexpressing gigaxonin. These studies identify gigaxonin as an important factor that targets GFAP for degradation through the proteasome pathway. Our findings provide a critical foundation for future studies aimed at reducing or reversing pathological accumulation of GFAP as a potential therapeutic strategy for AxD and related diseases.

About the Lab:  Albee Messing’s lab is focused on understanding developmental and pathologic aspects of glial cell biology in the nervous system of the mouse, with a particular focus on astrocytes and their major intermediate filament protein, GFAP. Main strategies involve genetic manipulation of glial gene expression using transgenic techniques, and gene targeting in embryonic stem cells to generate mutant strains of mice. Current projects address a variety of topics, such as regulation of gene expression, and the role of GFAP mutations and accumulation in the pathogenesis of AxD. A major effort is devoted to devising novel therapeutic strategies for treatment of this disorder, and identifying biomarkers to permit monitoring severity or progression of the disease.