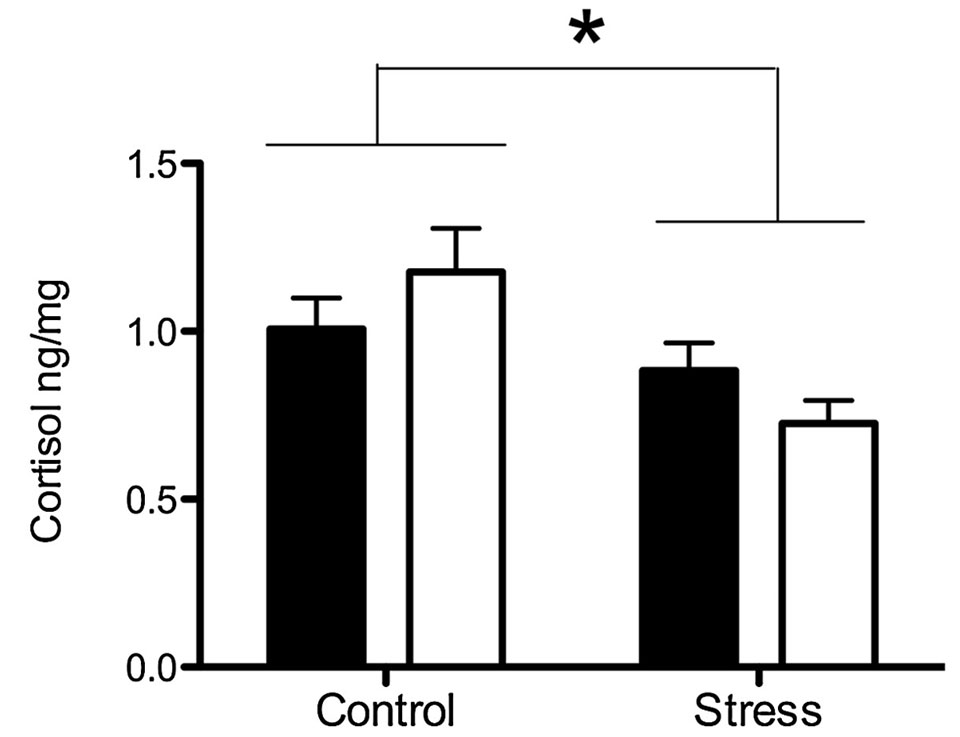 Legend: Cortisol can be measured in the hair of newborn infants and reflects hormones secreted during the third trimester. Maternal disturbance during mid-pregnancy down-regulated the fetal secretion of cortisol during late gestation. Male (black) and female (white) infant monkeys born to mothers from undisturbed control or stressed pregnancies. *p < 0.05 between prenatal conditions.

Abstract: Hormones present in hair provide summative information about endocrine activity while the hair was growing. Therefore, it can be collected from an infant after birth and still provide retrospective information about hormone exposure during prenatal development. We employed this approach to determine whether a delimited period of maternal stress during pregnancy affected the concentrations of glucocorticoids and gonadal hormones in the hair of neonatal rhesus monkeys. Hair from 22 infant monkeys exposed to 5 weeks of gestational disturbance was compared to specimens from 13 infants from undisturbed control pregnancies. Using an LC/MS/MS based technique, which permitted seven steroid hormones to be quantified simultaneously, we found two hormones were significantly different in infants from disturbed pregnancies; cortisol and testosterone levels were lower in the hair of both male and female neonates. Maternal hair hormone levels collected on the same day after delivery no longer showed effects of the disturbance earlier during pregnancy. This study documents that a period of acute stress, lasting for 20% of gestation, has sustained effects on the hormones to which a developing fetus is exposed.

About the investigator: The Coe Lab’s research program focuses on the relationship between asymmetrical activation patterns of the cerebral cortex and the immune system. These immune studies have been conducted in both healthy human subjects, as well as individuals who experienced unilateral hemispheric damage in the perinatal period or young adulthood. Persistent alterations in the physiological set points for certain immune responses have been found.