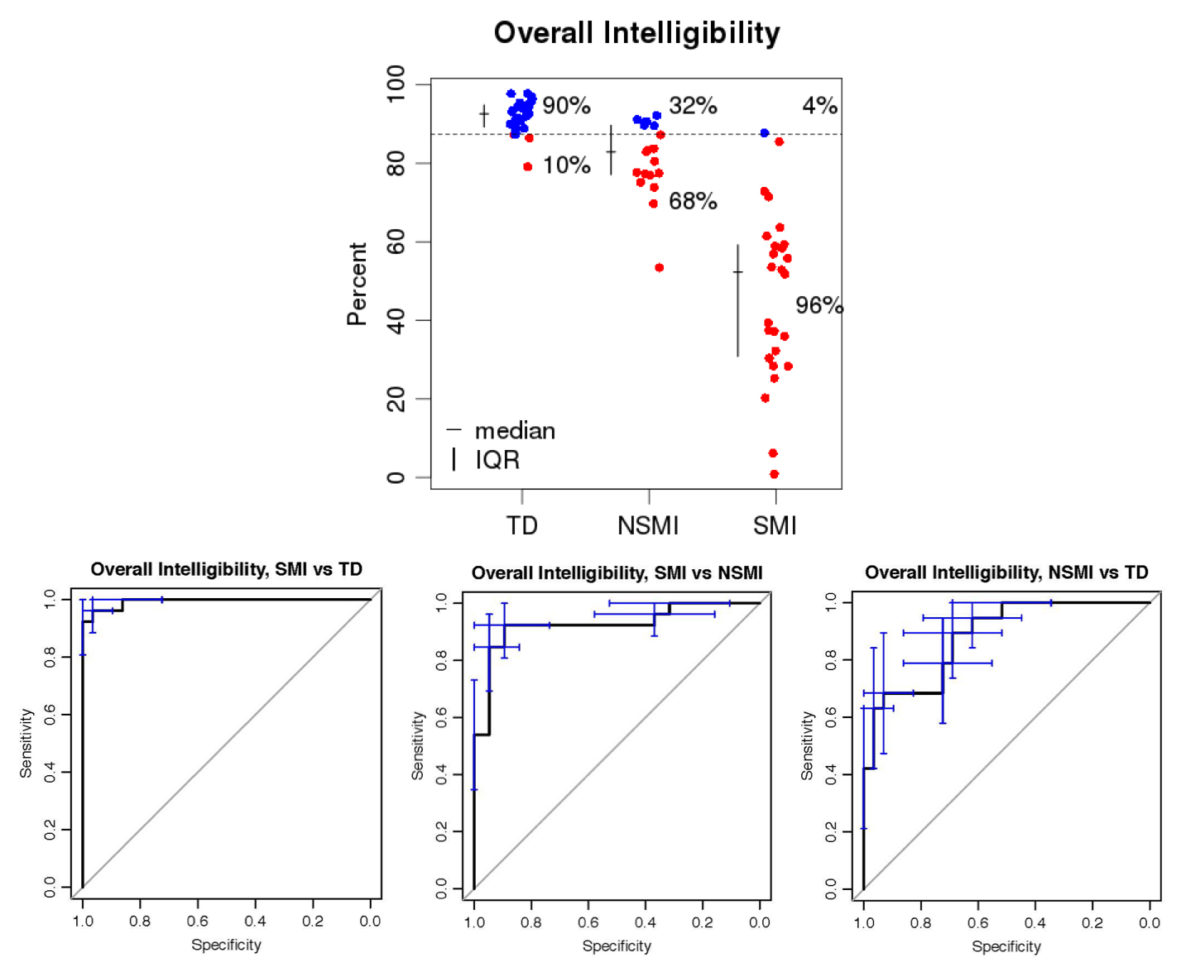 Legend: Our goal is to differentiate complex typical from atypical speech motor deficits around age 5 years using simple intelligibility measures. Differentiating borderline/mild speech-motor deficits from an age-appropriate range of variability is a challenge. We show that a novel measure of overall intelligibility distinguishes children with speech-motor involvement (SMI) from typically developing (TD) children and even from CP children with no speech-motor involvement (NSMI). Dot plots and ROC curves show strong separation of the three groups by overall intelligibility, with areas under the curve of 0.98, 0.84, and 0.79.

Abstract: Early diagnosis of speech disorders in children with CP is of critical importance. A key problem is differentiating those with borderline or mild speech motor deficits from those who are within an age-appropriate range of variability. We studied speech production in 45 children with CP (26 with clinical speech-motor involvement (SMI); 19 with no evidence of speech-motor involvement (NSMI)); and 29 typically developing (TD) children of the same age. We quantified how well measures of speech intelligibility, speech rate, and intelligible words per minute (IWPM) differentiated typically developing children from children with CP. Results showed that all measures differentiated between all three groups of children with considerable precision based on ROC area under the curve (AUC) data. AUC was highest for overall intelligibility, which ranged from 0.88 to 0.99. IWPM also yielded very strong AUCs, ranging 0.81 to 0.99.  In each of the ROC models, discrimination between groups was highest for SMI vs. TD children and lowest for NSMI vs. TD children. Data indicated that 90% of TD children had overall intelligibility above 87% at 5 years of age, but that no child was 100% intelligible. Further, 90% children with SMI had intelligibility below 72%. Children with NSMI overlapped with the TD group, with most children having intelligibility between 73-91%. Children with SMI did not overlap with either of the other groups in their intelligibility. Findings suggest that functional speech measures differentiate very clearly between children with and without CP, and that even children who do not show evidence of SMI have functional differences in their speech production ability relative to TD peers.

About the Lab: Paul Rathouz’s areas of methodological interests include missing data in models for highly stratified or longitudinal data, generalized linear models, methods for behavior genetic designs and outcome-dependent sampling. His current applied statistical work is in the areas of heath services research, developmental psychopathology, and developmental disabilities. This work on developmental disabilities is carried out through multiple collaborations with Waisman Center investigators.