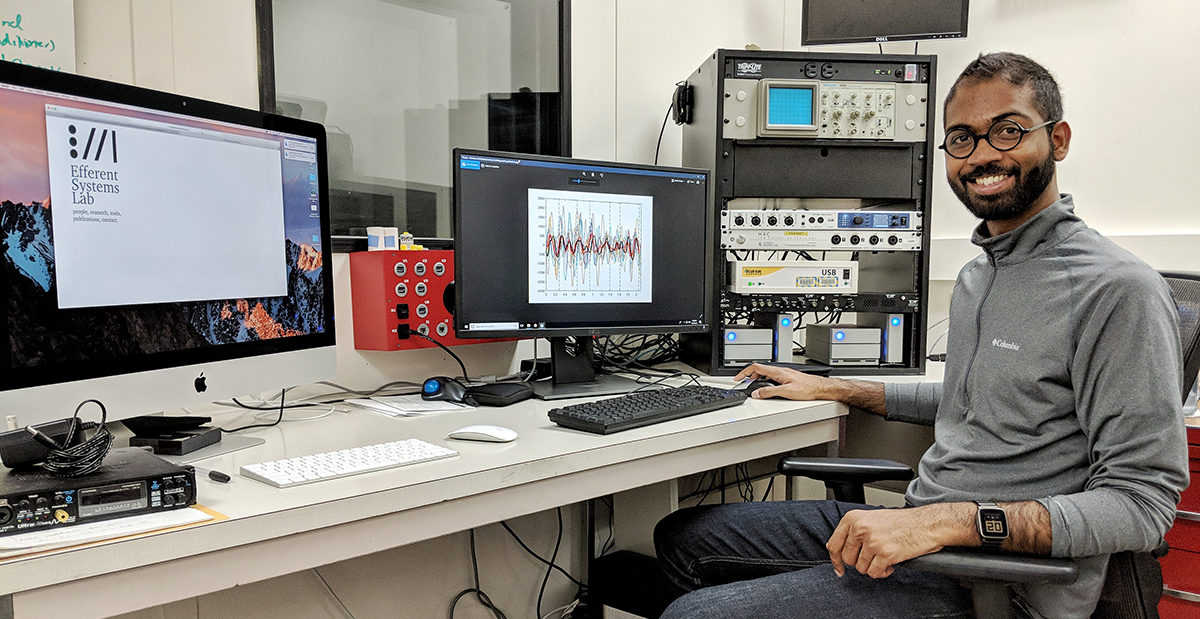 To test for several types of hearing loss, audiologists use a small earphone to introduce sounds – like clicks – into the ear. Then they monitor for sounds, called otoacoustic emissions, that the inner ear, or cochlea, produces in response to the clicks. In individuals with damaged hearing, the inner ear may not produce any sounds.

In a recently published study, Boothalingam and colleagues zeroed in on click characteristics that could help clinicians reliably test for inner ear health and simultaneously assess an important feedback network in the brain called the auditory efferent system.

“Efferent systems are neural pathways that relay information from the brain to sensory organs,” says Boothalingam, an assistant professor of communications sciences and disorders at the University of Wisconsin-Madison.

Efferent function is important in hearing because it helps prevent sensory overload. “It’s essentially a feedback system,” says Boothalingam. “If there’s a soft sound, the inner ear amplifies it. Conversely, loud sounds can be softened by efferent signaling.”

Researchers are still exploring what other roles efferent function may have related to hearing. “One of the reasons I think we don’t completely understand efferent function is because we don’t have the right set of tools yet,” says Boothalingam.

So Boothalingam and his colleagues set out to find one. Most of the research was done at Northwestern University where Boothalingam was a postdoctoral scholar.

They used clicks with different intensities and other characteristics to elicit and collect responses from the inner ears of study participants. They then analyzed these data to determine click parameters that were best suited to test inner ear health and efferent function.

“Clinicians already use clicks and the inner ear response to gauge hearing health,” says Boothalingam. “We hope this familiarity will help them adopt this test for efferent function as well.”

Being able to measure efferent function reliably has several potential clinical applications. For example, some children with autism spectrum disorder are very sensitive to sounds.

“It’s thought that these children may have hyperactive efferent function,” says Boothalingam. “A reliable clinical test would allow us to determine if that’s true. Then we could plan appropriate interventions and therapies to help these children with their hearing issues.”

There is also new evidence that simply detecting the sounds from the inner ear in response to clicks may not be an accurate hearing test.

“We used to think that when people went to a loud event, a concert for example, they lost some hearing, but then a couple of days later they were fine,” says Boothalingam.

That’s because audiologists were using clicks to test for sounds from the inner ear, which seemed to rebound relatively quickly after attending loud events. But other tests have indicated that there may be hearing damage that does not heal with time.

“So all of us might have some level of this damage,” says Boothalingam. Having a reliable test for efferent function may help clinicians detect these “hidden” types of hearing loss.

The non-invasive nature of hearing tests also makes them challenging to conduct and analyze, says Boothalingam. “It’s a bit like standing outside a house party and trying to determine the identity of the people and the content of what is being spoken inside just by listening to bits and pieces of conversation that make it outside,” he recalls scientists in the field saying about these inner ear responses.

There’s still a lot of work to be done, says Boothalingam, “but if we can show that the test we are developing is more reliable than the tests currently being used, I think we will find several clinical applications.”

Other authors include Julianne Kurke and Sumitrajit Dhar, both at Northwestern University.