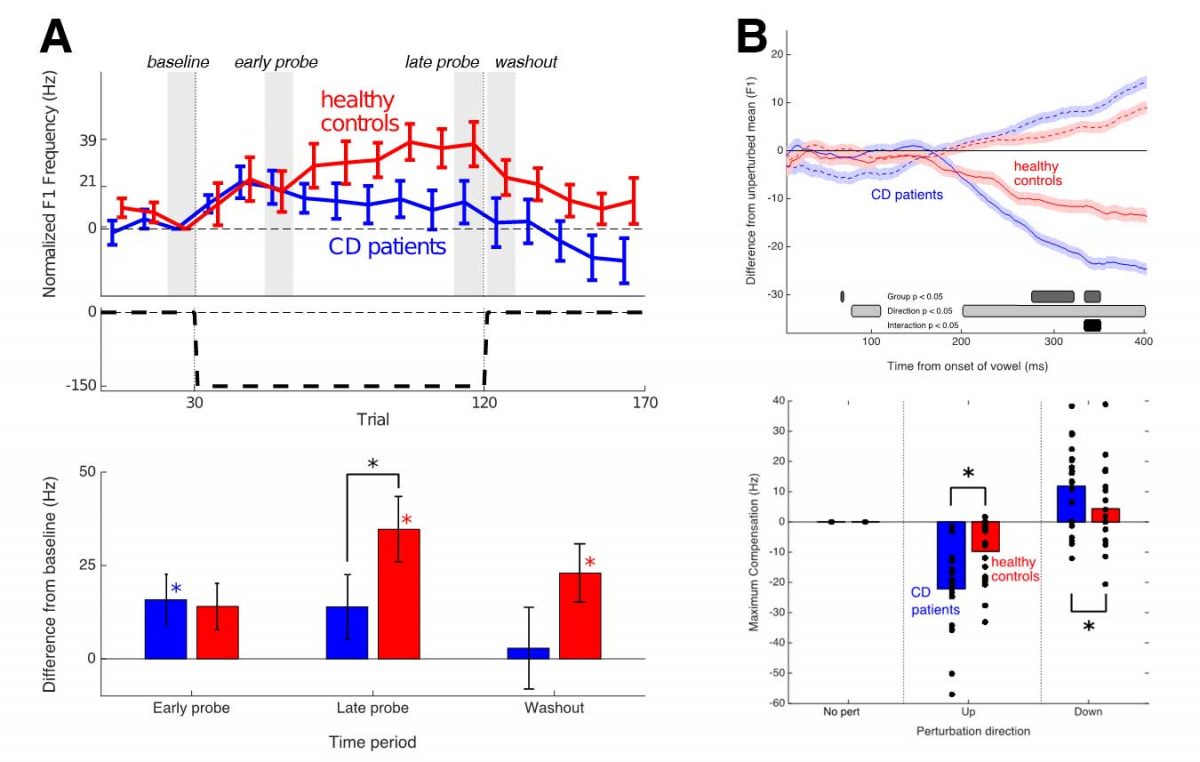 Legend: When we speak, we are able to use what we hear about that speech (auditory feedback) to alter our speech movements both in real time within a single word (feedback control) as well as over longer time scales across multiple utterances (feedforward control). Here, we test the use of auditory feedback in patients with cerebellar degeneration by introducing an external perturbation of the first vowel formant (F1), causing “head” to sound something like “hid”. A: A consistent perturbation of F1 is used, and changes to participants speech are measured across multiple productions to assess feedforward control. Cerebellar patients (blue) show a decreased ability to use auditory feedback to alter their speech to adapt to this change over many repetitions of head relative to age-matched controls (red) at both the late probe and washout timepoints, suggesting that 1) feedforward control is impaired in this population and 2) the cerebellum is critical for accurate feedforward control in speech. B: random perturbations of F1 are used, and changes to participants speech are measured within each utterance to assess feedback control. Cerebellar patients show an increased response to external F1 perturbations relative to age-matched controls, suggesting a heightened sensitivity to auditory errors in this population.

Abstract: The cerebellum has been hypothesized to form a crucial part of the speech motor control network. Evidence for this comes from patients with cerebellar damage, who exhibit a variety of speech deficits, as well as imaging studies showing cerebellar activation during speech production in healthy individuals. To date, the precise role of the cerebellum in speech motor control remains unclear, as it has been implicated in both anticipatory (feedforward) and reactive (feedback) control. Here, we assess both anticipatory and reactive aspects of speech motor control, comparing the performance of patients with cerebellar degeneration and matched controls. Experiment 1 tested feedforward control by examining speech adaptation across trials in response to a consistent perturbation of auditory feedback. Experiment 2 tested feedback control, examining online corrections in response to inconsistent perturbations of auditory feedback. Both male and female patients and controls were tested. The patients were impaired in adapting their feedforward control systems relative to controls, exhibiting attenuated anticipatory responses to the perturbation. In contrast, the patients produced even larger compensatory responses than controls, suggesting an increased reliance on sensory feedback to guide speech articulation in this population. Together, these results suggest that the cerebellum is crucial for maintaining accurate feedforward control of speech but relatively uninvolved in feedback control.