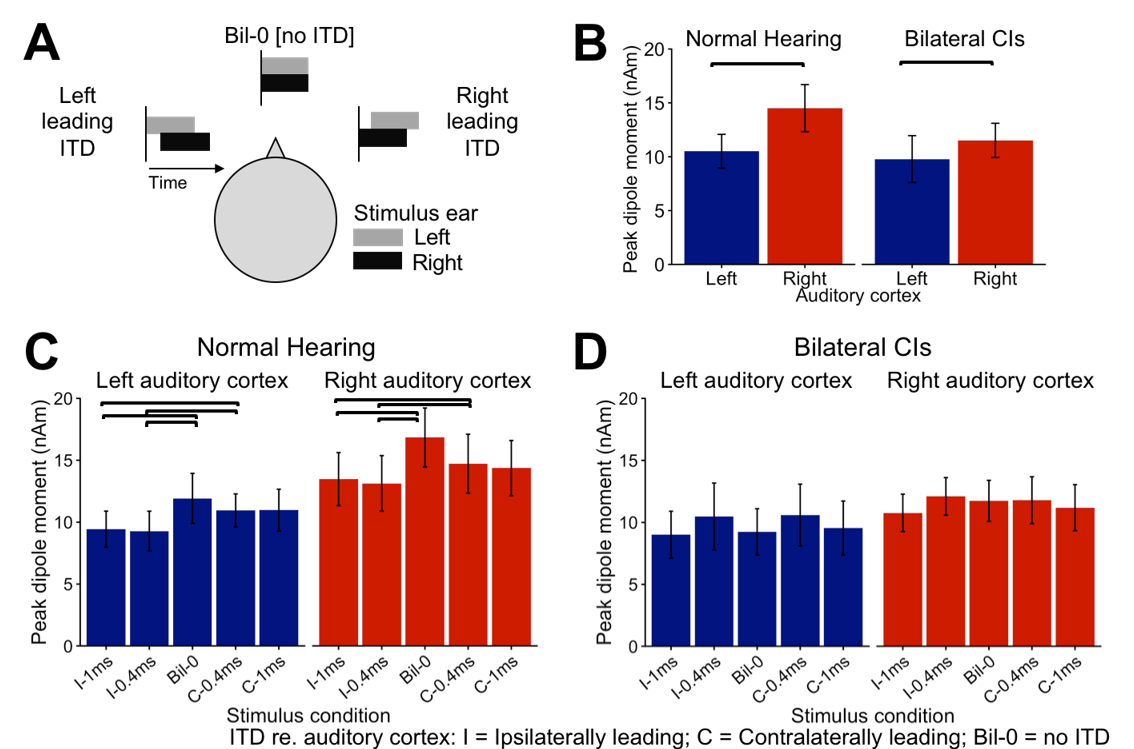 Legend: A. One of the cues that we use to locate sounds in space is the difference in arrival time of sound between our ears called interaural time differences (ITDs). ITD detection is affected by prelingual deafness and could be facilitated during development by early provision of  bilateral cochlear implants (CIs) with short inter-implant delays. We compared cortical processing of ITDs in 16 children with bilateral CIs provided in the same surgery (chronological age = 6.13±0.79 years; age of implantation = 2.10±0.97 years; time-in-sound = 4.29±0.97 years) and 16 hearing-age matched peers (chronological age/time-in-sound = 5.24±0.95 years) to assess if simultaneous provision of bilateral CIs promotes development of cortical ITD processing. B. Children with normal hearing and children with bilateral CIs show similar right hemispheric dominance during ITD processing.  C. ITD processing in children with normal hearing is characterized by reduced activity to stimuli leading from the same side of each auditory cortex (ipsilateral, I). D. In contrast to children with normal hearing, sensitivity to ITDs is significantly reduced in children with bilateral CIs. In summary, simultaneous provision of bilateral CIs promotes the expected right hemispheric dominance during ITD processing, however, it does not appear to support the development of typical cortical ITD detection.

About the Investigator: Viji’s research focuses on the development of hearing in children with or without hearing loss. In particular, she is interested in investigating the effects of age, auditory deprivation, and hearing prostheses like hearing aids or cochlear implants on how sounds, particularly speech stimuli, are encoded by the auditory system using electroencephalography (EEG) techniques. In addition, she is interested in evaluating how these factors affect the ability of the auditory system to decipher where sounds are located in space. The goal of her research is to develop evidence that can help inform intervention strategies in children with hearing loss and extend the use of EEG techniques to clinical practice to help clinicians (audiologists) evaluate intervention outcomes in children.