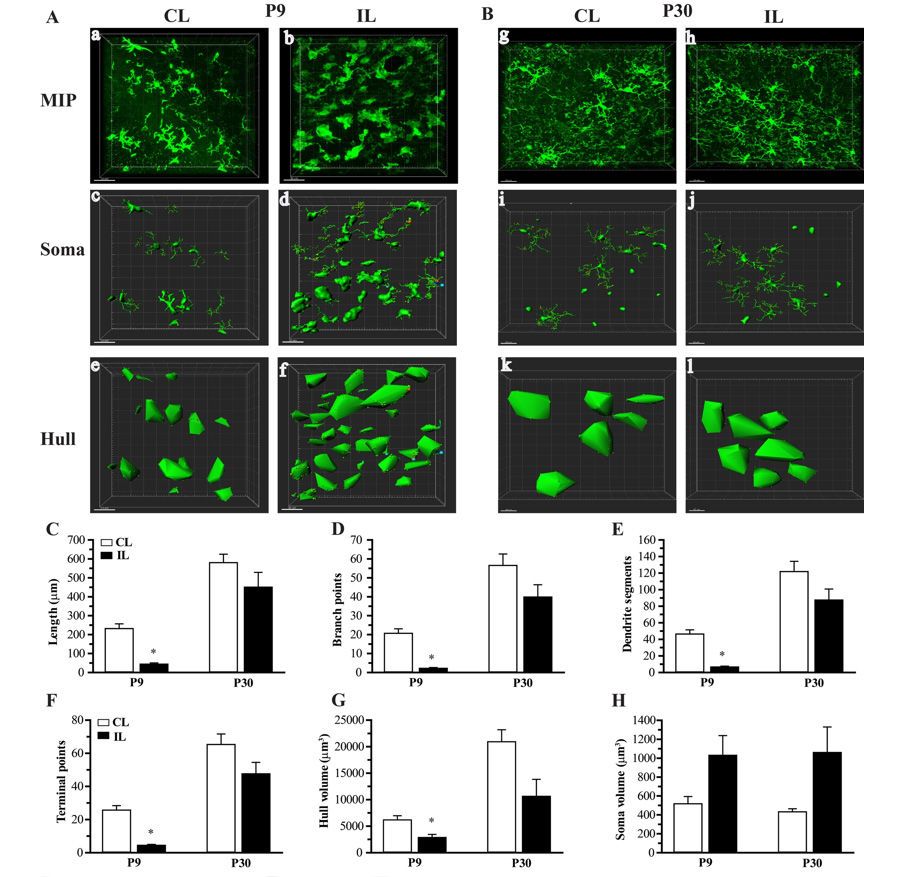 Title: Developmental differences in microglia morphology and gene expression during normal brain development and in response to hypoxia-ischemia

Abstract: Background: Neuroinflammation plays an important role in ischemic brain injury and recovery, however the interplay between brain development and the neuroinflammatory response is poorly understood. We previously described age-dependent differences in the microglial response and the effect of microglial inhibition. Here we investigate whether age-dependent microglial responses may be related to pre-injury developmental differences in microglial phenotype. Methods: Measures of microglia morphology were quantified using semi-automated software analysis of immunostained sections from postnatal day 2 (P2), P9, P30 and P60 mice using IMARIS. Microglia were isolated from P2, P9, P30 and P60 mice, and expression of markers of classical and alternative microglial activation was assessed, as well as transforming growth factor beta (TGF-β) receptor, Serpine1, Mer Tyrosine Kinase (MerTK), and the suppressor of cytokine signaling (SOCS3). Hypoxia-ischemia (HI) was induced in P9 and P30 mice using unilateral carotid artery ligation and exposure to 10% oxygen for 50min. Microglia morphology and microglial expression of genes in the TGF-β and MerTK pathways were determined in ipsilateral and contralateral hippocampus. Results: A progressive and significant increase in microglia branching morphology was seen in all brain regions from P2 to P30. No consistent classical or alternative activation profile was seen in isolated microglia. A clear transition to increased expression of TGF-β and its downstream effector serpine1 was seen between P9 and P30. A similar increase in expression was seen in MerTK and its downstream effector SOCS3. HI resulted in a significant decrease in branching morphology only in the P9 mice, and expression of TGF-β receptor, Serpine1, MerTK, and SOCS3 were elevated in P30 mice compared to P9 post-HI. Conclusion: Microglia maturation is associated with changes in morphology and gene expression, and microglial responses to ischemia in the developing brain differ based on the age at which injury occurs.

About the Lab: By identifying MRI biomarkers in animal models of pediatric brain injury, Waisman investigator Peter Ferrazzano hopes to provide a means for selecting the patients most likely to benefit from a particular neuroprotective intervention in subsequent clinical trials. Basing patient selection on the physiologic target of therapy rather than simply the disease state will reduce the sample size needed, increase the likelihood of observing a drug effect, and facilitate the translation of promising neuroprotective interventions into clinical use.