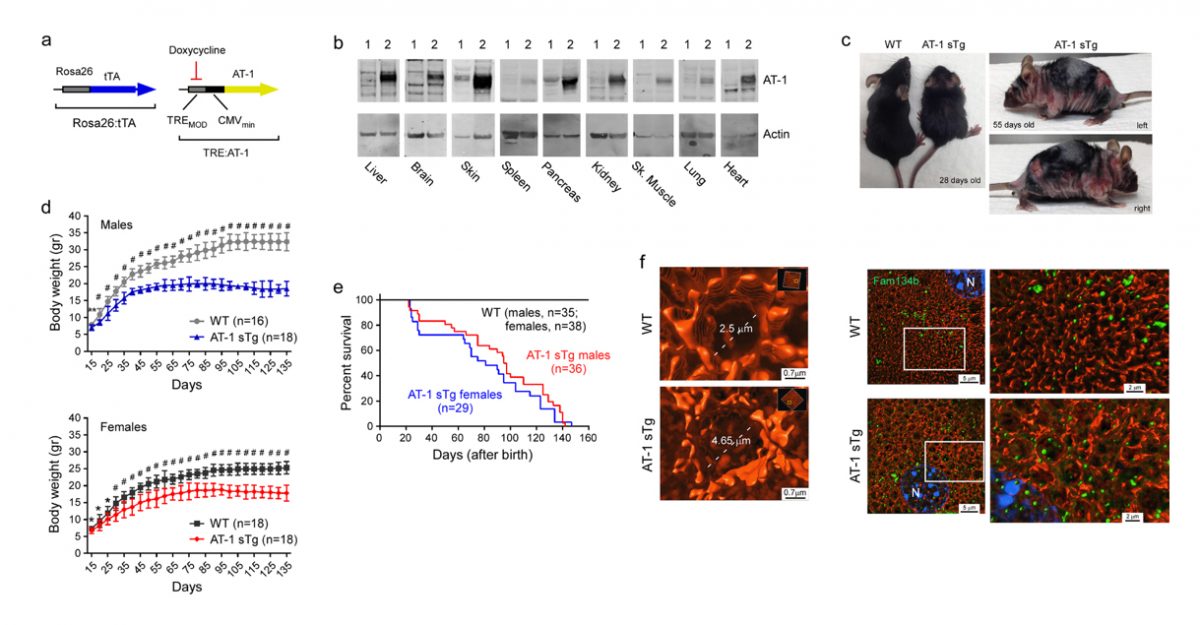 Title: Increased transport of acetyl-CoA into the endoplasmic reticulum causes a progeria-like phenotype

Abstract: The membrane transporter AT-1/SLC33A1 translocates cytosolic acetyl-CoA into the lumen of the endoplasmic reticulum (ER), participating in quality control mechanisms within the secretory pathway. Mutations and duplication events in AT-1/SLC33A1 are highly pleiotropic and have been linked to diseases such as spastic paraplegia, developmental delay, autism spectrum disorder, intellectual disability, propensity to seizures, and dysmorphism. Despite these known associations, the biology of this key transporter is only beginning to be uncovered.  Here, we show that systemic overexpression of AT-1 in the mouse leads to a segmental form of progeria with dysmorphism and metabolic alterations. The phenotype includes delayed growth, short lifespan, alopecia, skin lesions, rectal prolapse, osteoporosis, cardiomegaly, muscle atrophy, reduced fertility, and anemia. In terms of homeostasis, the AT-1 overexpressing mouse displays hypocholesterolemia, altered glycaemia, and increased indices of systemic inflammation. Mechanistically, the phenotype is caused by a block in Atg9a-Fam134b-LC3β and Atg9a-Sec62-LC3β interactions, and defective reticulophagy, the autophagic recycling of the ER. Inhibition of ATase1/ATase2 acetyltransferase enzymes downstream of AT-1 restores reticulophagy and rescues the phenotype of the animals. These data suggest that inappropriately elevated acetyl-CoA flux into the ER directly induces defects in autophagy and recycling of subcellular structures and that this diversion of acetyl-CoA from cytosol to ER is causal in the progeria phenotype.  Collectively, these data establish the cytosol-to-ER flux of acetyl-CoA as a novel event that dictates the pace of aging phenotypes and identify intracellular acetyl-CoA dependent homeostatic mechanisms linked to metabolism and inflammation.