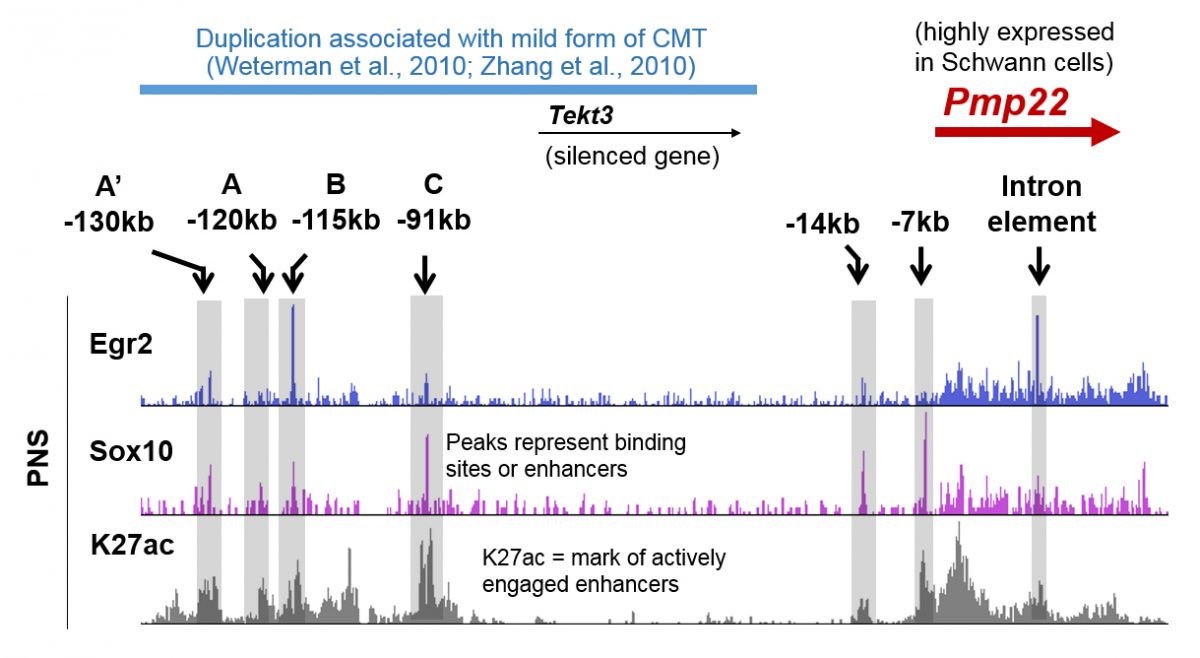 Title: A superenhancer regulating a vital gene for myelin formation.

Legend: ChIP-Seq analysis demonstrates that one super-enhancer, hereafter termed Pmp22-SE (purple bar), coincides with a large region shared in overlapping duplications not including the Pmp22 gene associated with CMT1A-like symptoms. Genome editing was used to delete the superenhancer, resulting in a large decrease on the PMP22 levels.

Abstract: Peripheral nerve myelination is adversely affected in the most common form of the hereditary peripheral neuropathy called Charcot-Marie-Tooth Disease. This form, classified as CMT1A, is caused by a 1.4 Mb duplication on chromosome 17, which includes the abundantly expressed Schwann cell myelin gene, Peripheral Myelin Protein 22 (PMP22). This is one of the most common copy number variants causing neurological disease. Overexpression of Pmp22 in rodent models recapitulates several aspects of neuropathy, and reduction of Pmp22 in such models results in amelioration of the neuropathy phenotype. Recently we identified a potential super-enhancer approximately 90-130 kb upstream of the Pmp22 transcription start sites. This super-enhancer encompasses a cluster of individual enhancers that have the acetylated histone H3K27 active enhancer mark, and coincides with smaller duplications identified in patients with milder CMT1A-like symptoms, where the PMP22 coding region itself was not part of the duplication. In this study, we have utilized genome editing to create a deletion of this super-enhancer to determine its role in Pmp22 regulation. Our data show a significant decrease in Pmp22 transcript expression using allele-specific internal controls. Moreover, the P2 promoter of the Pmp22 gene, which is used in other cell types, is affected, but we find that the Schwann cell-specific P1 promoter is disproportionately more sensitive to loss of the super-enhancer. These data show for the first time the requirement of these upstream enhancers for full Pmp22 expression.