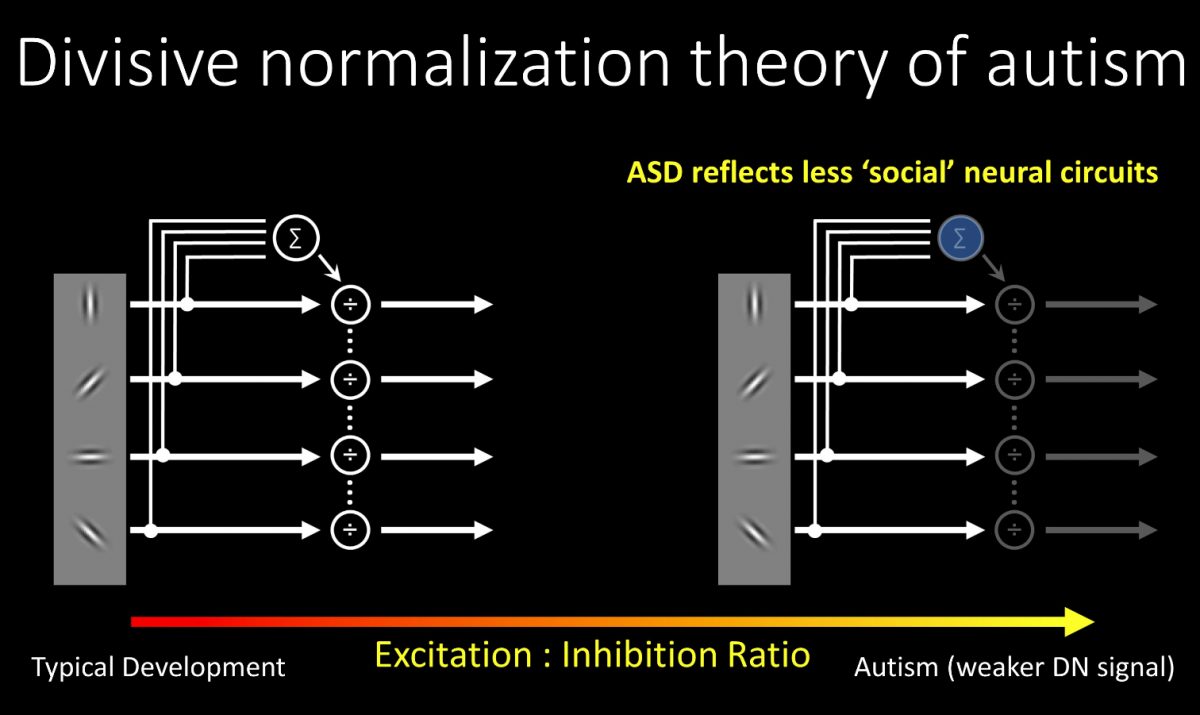 Legend: To elucidate the neuro-computational underpinnings of autism spectrum disorder (ASD), the Rosenberg lab uses an interdisciplinary approach combining behavioral studies, neuroimaging, and computational modeling. We are currently testing the hypothesis that some behavioral consequences of ASD are due to alterations in a canonical neural computation called divisive normalization.

Abstract: Autism is a neurodevelopmental disorder that manifests as a heterogeneous set of social, cognitive, motor, and perceptual symptoms. This system-wide pervasiveness suggests that, rather than narrowly impacting individual systems such as affection or vision, autism may broadly alter neural computation. Here, we propose that alterations in nonlinear, canonical computations occurring throughout the brain may underlie the behavioral characteristics of autism. One such computation, called divisive normalization, balances a neuron’s net excitation with inhibition reflecting the overall activity of the neuronal population. Through neural network simulations, we investigate how alterations in divisive normalization may give rise to autism symptomatology. Our findings show that a reduction in the amount of inhibition that occurs through divisive normalization can account for perceptual consequences of autism, consistent with the hypothesis of an increased ratio of neural excitation to inhibition (E/I) in the disorder. These results thus establish a bridge between an E/I imbalance and behavioral data on autism that is currently absent. Interestingly, our findings implicate the context-dependent, neuronal milieu as a key factor in autism symptomatology, with autism reflecting a less “social” neuronal population. Through a broader discussion of perceptual data, we further examine how altered divisive normalization may contribute to a wide array of the disorder‘s behavioral consequences. These analyses show how a computational framework can provide insights into the neural basis of autism and facilitate the generation of falsifiable hypotheses. A computational perspective on autism may help resolve debates within the field and aid in identifying physiological pathways to target in the treatment of the disorder.

About the Lab: The Rosenberg Lab studies the neural computations underlying 3D vision, multisensory integration, and the neural basis of autism.