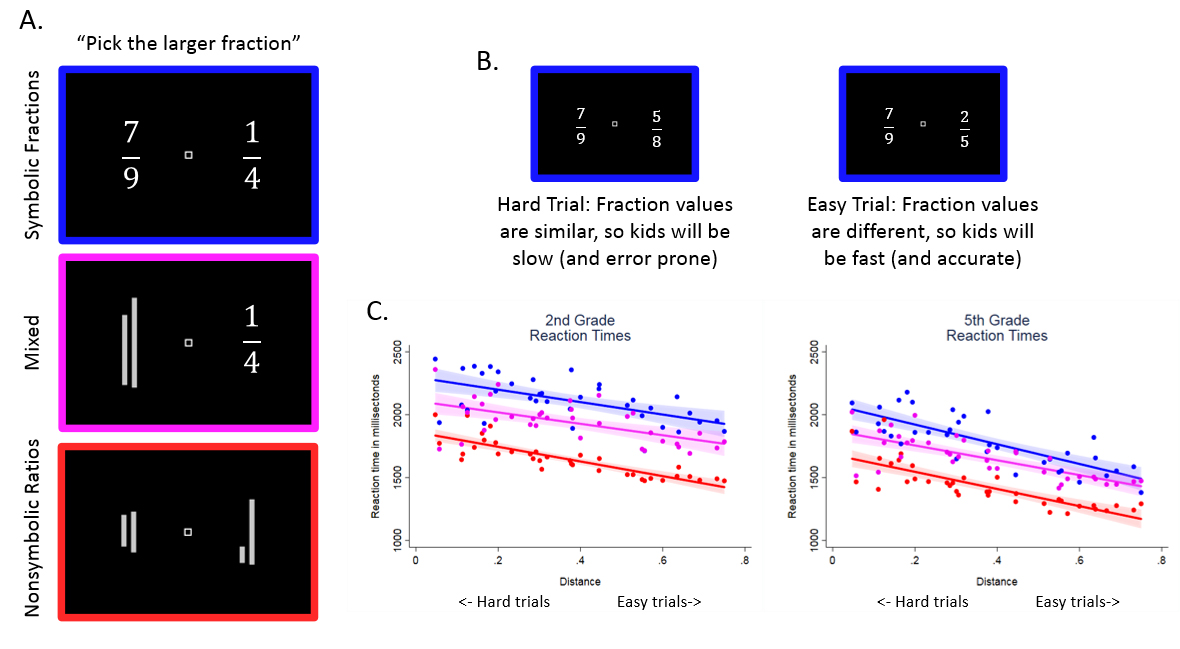 Title: Children Can Successfully Compare Fractions, Even Across Notations

Legend: Reaction time patterns in a fractions comparison task. Part A shows the three types of comparisons children were asked to make: comparing pairs of symbolic fractions (blue), mixed symbolic-non-symbolic pairs (magenta) and non-symbolic ratios (red). Part B shows the types of trials (easy and hard) for symbolic fractions. Similar trials were created for the other two notations. Part c shows reaction times for 2nd graders (who have not yet had extensive instructions with fractions) and 5th graders (who have had two years of fractions instruction). Even 2nd graders showed “distance effects” being faster (and more accurate) for easy trials compared with hard trials. Overall, non-symbolic pairs were judged fastest, with mixed in-between and symbolic being slower. Overall, 5th graders were faster (and more accurate) than 2nd graders. Colors match those in Part A. Shaded regions represent the 95% confidence interval.

Abstract: Adults and children alike struggle with fractions (see: https://www.waisman.wisc.edu/2017/01/05/fractions-of-neuroscience/), but it also turns out that learning fractions is vitally important for later math skills.  Our lab has suggested that children’s ability to learn fractions might build on a more basic perceptual ability to see and understand non-symbolic ratios, which has been demonstrated even in non-human primates (for a review, see Lewis, Matthews & Hubbard, 2015).  We have been testing this prediction in an NICHD-funded study of children’s behavioral and brain development as it relates to math, by studying 2nd and 5th grade children.  Critically, 2nd graders have not yet had formal instruction with fractions, while 5th graders have had two years of formal instruction. We measured their ability to understand fractions by asking them to pick the larger fraction. Additionally, we looked at three ways of presenting the fractions (“notations”). Symbolic fractions (blue border) are the ones that we commonly learn in school, while non-symbolic ratios (red border) are simple perceptual ratios, of the sort we think may serve as an underappreciated foundation for fractions learning. Mixed pairs (magenta border) look at how children compare across notations.  We also manipulated task difficulty by presenting “hard” pairs where the fraction values are similar (e.g., 7/9 vs. 5/8) and “easy” pairs, where the two fraction values are very dissimilar (e.g., 7/9 vs. 2/5). We predicted that children would be faster (and more accurate) for the easy pairs than for the hard pairs.  Our results showed that even 2nd grade children could successfully perform the comparison task, and both groups showed “distance effects”: they were faster (and more accurate) on easy trials than on hard trials, showing that they were thinking about the relative magnitude of the fractions. Consistent with our predictions, the non-symbolic condition was fastest, mixed intermediate, and symbolic fractions were slowest (this pattern holds even for adults).  Taken together, these results suggest that even 2nd graders are using an “analog” magnitude representation of fractions, and further suggest that symbolic fractions understanding might build on non-symbolic ratio understanding.  These findings might suggest future avenues for teaching children fractions, separate from the common “pizza” fractions often used in education.

About the Lab: The Educational Neuroscience Lab explores questions at the intersection of education and neuroscience, in the emerging field of Educational Neuroscience. Our research examines the neural underpinnings of cognitive processes that are relevant for education, and the role of educational experiences and enculturation as primary drivers of brain plasticity to create the neural circuits that underlie human specific abilities. Our research combines the latest technological advances in understanding the human brain as a “learning organ” with insights from cognitive psychology and education to help build the emerging field of educational neuroscience.