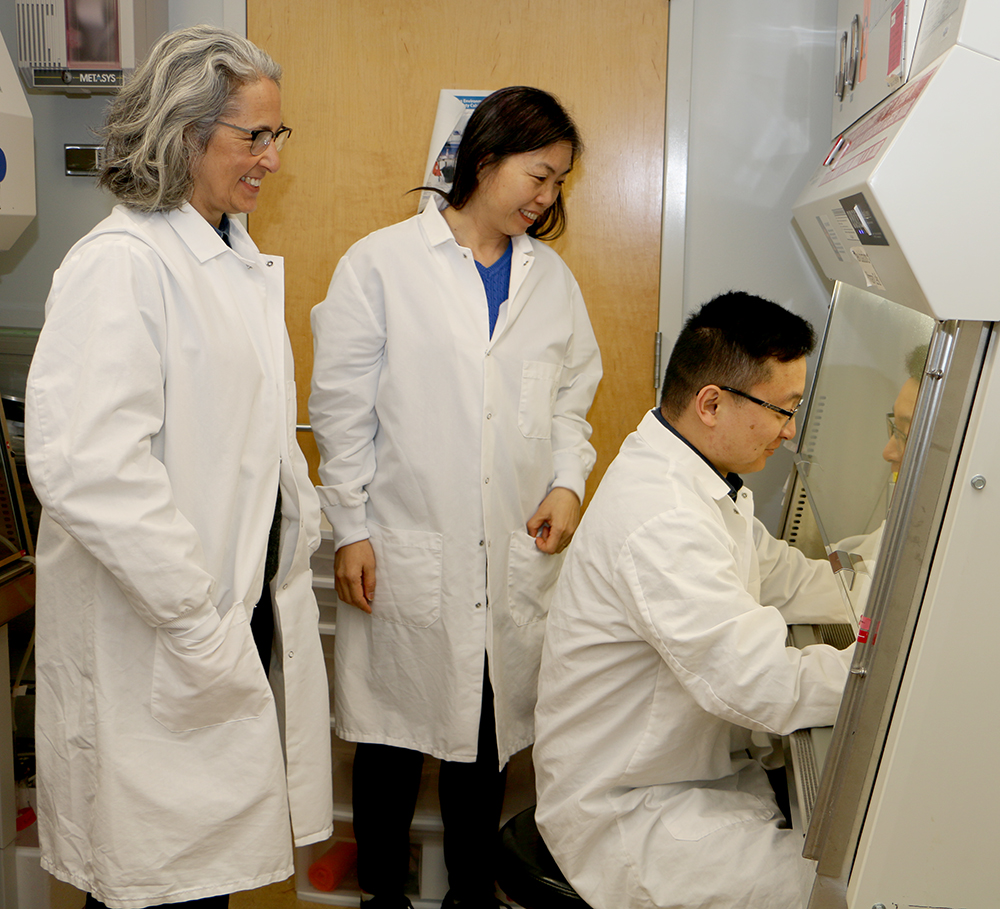 Anita Bhattacharyya, Xinju Zhao, and Meng Li have improved upon a technique to identify a key protein in fragile X syndrome.
Photo by Clark Kellogg

Researchers at the Waisman Center made a significant step in understanding the function of a specific protein, FMR1, whose absence causes fragile X syndrome, or FXS. Waisman investigators Xinyu Zhao, PhD, and Anita Bhattacharyya, PhD, with research associate Meng Li, published their paper “Identification of FMR1-regulated molecular networks in human neurodevelopment” in the March issue of the journal Genome Research.

FXS is the leading inherited cause of intellectual and developmental disabilities. Lack of FMR1 contributes to many of the common symptoms of FXS, including cognitive disability, anxiety, attention deficit, language delay, and physical features such as large ears and long faces. Researchers have been working to elucidate the basic functions of the FMR1 protein primarily in animal models, but little has been done in human cells.

FMR1 is most commonly found in the brain and it regulates many other genes in the brain. “Even though FMR1 is a single gene mutation — a single protein — because of this function, it can impact a lot of things,” says Bhattacharyya.

Li used an improved technique to study this protein in human neurons that were derived from induced human pluripotent stem cells for the first time.

“The first thing we want to understand is what genes are regulated by FMR1,” Zhao says. Because FMR1 is known to bind messenger RNA — the intermediate steps between gene and protein production — to understand how and why the absence of FMR1 has such severe consequences, the researchers looked at what messenger RNAs are bound by FMR1. To do this, they improved upon a technique called ‘CLIP-seq’ — which was originally designed for cell lines and tissue with a large quantity of materials — and adapted it to human neurons with a limited cell number. ‘CLIP’ stands for ‘crosslinking immunoprecipitation,’ and is a method used in molecular biology to analyze protein interactions with RNA. The ‘seq’ refers to the sequencing of RNA that is identified and isolated through CLIP.

“It’s a technique that has been used for some time,” Bhattacharyya says. “It has just not been used in human neurons. The idea behind it was quite simple, but it was technically very difficult.”

The first step in CLIP-seq uses CRISPR-Cas9 to add a unique identifier to the FMR1 protein in human pluripotent stem cells. Li engineered a small peptide called a ‘FLAG-tag,’ which he attached to the FMR1 so that he could pick it out of a crowd of proteins in human neurons.

“Adding a tag to a specific protein among millions of proteins in the cells is almost like putting a special hat onto a person,” Zhao says. “A bright red hat so that you can find that person in a crowd.”

FMR1 is known as an RNA-binding protein, or RBP. An RBP binds to a single or double strand of RNA — the chemical that informs proteins what they are to become — and together give proteins their primary function. The second step in CLIP-seq is isolating the FMR1 protein once it has bound to messenger RNA, or mRNA, which carry codes of DNA from the nucleus of the cell. Researchers currently do not know which kinds of mRNA the FMR1 binds to or what happens when they do. “There’s always an interest in identifying which mRNAs are actually bound by this protein because if you know what RNAs are regulated by this protein, we may be able to understand the function of this protein,” Zhao says.

Step three is the ‘seq’ in ‘CLIP-seq.’ Sequencing refers to the identification of a transcriptome, or a set of RNA molecules within a cell. After Li identified the list of RNA that bound to FMR1, they were then able to move onto the fourth and final step in the process.

The final step is gene network analysis. A gene network is a collection of molecules that interact within a cell to regulate the expression of both proteins and mRNA. Sushmita Roy, PhD, an associate professor in biostatistics and medical informatics, and Junha Shin, a postdoctoral fellow in Roy’s group, assisted in this process. “Using gene network analysis, we were able to determine the uniqueness of the different cell types in terms of the FMR1 target, or the community among the targets,” Zhao says.

By analyzing the complete list of mRNA produced through analysis, the research team found that FMR1 seems to bind longer transcripts of mRNA rather than shorter transcripts. “We don’t really know the biological significance of that yet,” Zhao says.

Building on previous research at the Waisman Center

While other FMR1 studies have been done using post-mortem brains, Zhao says that includes a “mixed population of cells” and would therefore not be fully representative of FMR1 functions.

Therefore, the ability to use human neurons derived from induced pluripotent stem cells was a crucial tool in this study. The neurons used for this project were produced based on methods published by Waisman investigator Su-Chun Zhang, MD, PhD. “Su-Chun is the reason UW-Madison is a leader in this process,” Zhao says. “He was the first person to develop a reproducible protocol to push pluripotent stem cells into neurons. Largely, everybody still follows that protocol.”

Looking into the future

Mouse models are usually a popular means of researching human genetics because mice share such a significant amount of human DNA. But in the case of FMR1, sufficient results have been elusive and don’t always transfer between the two mammals.

“A lot of people are trying to understand why, in humans, lack of FMR1 creates such a severe deficit, while in mice, it creates such a mild deficit,” Zhao says. One school of thought, she adds, is that humans’ higher functioning is the cause of that. “We have emotions, we want to learn, we want to do calculus, we have a more sophisticated social structure.”

“When we started the project, there was no study using real human neurons or a human brain,” Zhao says. “Our study is really the first one to identify what mRNAs are bound by this protein in human neurons and human neural progenitor cells.”