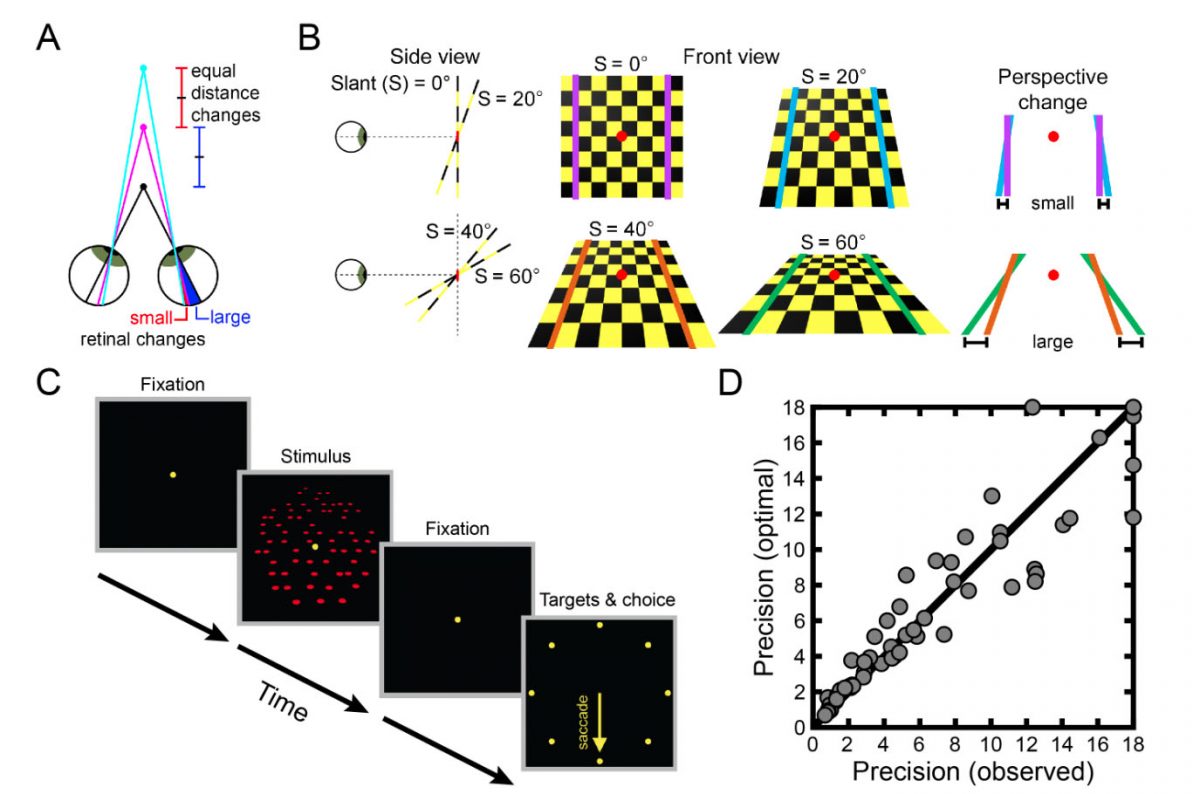 Legend: (A) The reliability of stereoscopic cues decreases with distance. (B) The reliability of perspective cues increases with orientation-in-depth (slant). (C) Eight alternative tilt discrimination task used to assess the precision of 3D visual perception. (D) The precision of 3D visual perception when both stereoscopic and perspective cues were provided was statistically optimal given the single-cue sensitivities.

Abstract: cHere, we assessed 3D perception in macaque monkeys using a planar surface orientation discrimination task. Perception was accurate across a wide range of spatial poses (orientations and distances), but precision was highly dependent on the plane’s pose. The monkeys achieved robust 3D perception by dynamically reweighting the integration of stereoscopic and perspective cues according to their pose-dependent reliabilities. Errors in performance could be explained by a prior resembling the 3D orientation statistics of natural scenes. We used neural network simulations based on 3D orientation-selective neurons recorded from the same monkeys to assess how neural computation might constrain perception. The perceptual data were consistent with a model in which the responses of two independent neuronal populations representing stereoscopic cues and perspective cues (with perspective signals from the two eyes combined using nonlinear canonical computations) were optimally integrated through linear summation. Perception of combined-cue stimuli was optimal given this architecture. However, an alternative architecture in which stereoscopic cues, left eye perspective cues, and right eye perspective cues were represented by three independent populations yielded two times greater precision than the monkeys. This result suggests that, due to canonical computations, cue integration for 3D perception is optimized but not maximized.

About the Lab: The Rosenberg Lab studies the neural computations underlying 3D vision, multisensory integration, and the neural basis of autism.