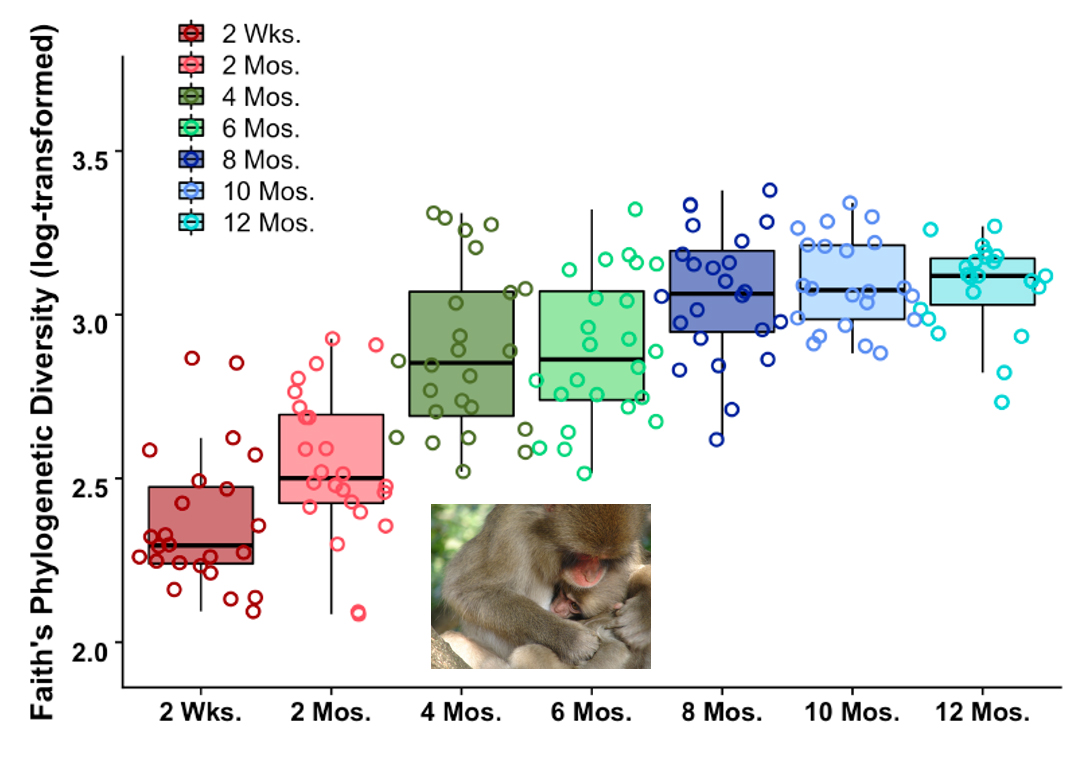 Title: Bacterial phenotypes in infant monkeys were associated with their rate of growth and cortical gray matter volumes at one year of age

Legend: Developmental changes in the gut microbiome of infant monkeys reveal a strong influence of the mother, and especially breast feeding, on the bacterial community structure and types of bacteria in a young infant. The transition to solid foods at 4-6 months was associated with a marked increase in diversity and a decline in Bifidobacteria.

Abstract: Over the last decade, multiple studies have highlighted the essential role of gut microbiota in normal infant development. However, the sensitive periods during which gut bacteria are established and become associated with physical growth and maturation of the brain are still poorly defined. This study tracked the assembly of the intestinal microbiota during the initial nursing period, and changes in community structure after transitioning to solid food in infant rhesus monkeys (Macaca mulatta). Anthropometric measures and rectal swabs were obtained at 2-month intervals across the first year of life and bacterial taxa identified by 16S rRNA gene sequencing. At 12 months of age, total brain and cortical regions volumes were quantified through structural magnetic resonance imaging. The bacterial community structure was dynamic and characterized by discrete maturational phases, reflecting an early influence of breast milk and the later transition to solid foods. Commensal microbial taxa varied with diet similar to findings in other animals and human infants; however, monkeys differ in the relative abundances of Lactobacilli and Bifidobacteria, two taxa predominant in breastfed human infants. Higher abundances of taxa in the phylum Proteobacteria during nursing were predictive of slower growth trajectories and smaller brain volumes at one year of age. Our findings define discrete phases of microbial succession in infant monkeys and suggest there may be a critical period during nursing when endogenous differences in certain taxa can shift the community structure and influence the pace of physical growth and the maturational trajectory of the brain.

About the Lab: The Coe Lab’s research program focuses on the relationship between asymmetrical activation patterns of the cerebral cortex and the immune system. These immune studies have been conducted in both healthy human subjects, as well as individuals who experienced unilateral hemispheric damage in the perinatal period or young adulthood. Persistent alterations in the physiological set points for certain immune responses have been found.