Title: Processing of voice pitch varies by frequency during infancy

Legend: Voice pitch is an essential feature for speech understanding. Envelope following responses (EFRs) are a useful EEG measure to infer the encoding of voice pitch and can be elicited by band-limited speech to assess the processing of voice pitch in a frequency-specific manner. Figure illustrates differences in the amplitude of envelope following responses (EFRs) between two groups of infants and one group of adults as a function of stimulus that varied in spectral dominance; the first formant (F1) of vowels were low-frequency dominant, the second and higher formants (F2+) were mid-frequency dominant and the fricatives were high-frequency dominant. The two infant groups varied in stimulus level; the level-matched group was evaluated at the same level as adults whereas the higher-level group was evaluated at a higher level. Grey bar represents the smallest real difference; numbers corresponding to each stimulus indicate second-generation p-values. Larger infant-adult differences were found at low frequencies than at mid and high frequencies, irrespective of the stimulus level. Results suggest slower development of voice pitch processing at low relative to mid and high frequencies.

Abstract: Envelope following responses (EFRs) may be a useful tool for evaluating the audibility of speech sounds in infants. The present study aimed to evaluate the characteristics of speech-evoked EFRs in infants with normal hearing, relative to adults, and identify age-dependent changes in EFR characteristics during infancy. In 42 infants and 21 young adults, EFRs were elicited by the first (F1) and the second and higher formants (F2+) of the vowels /u/, /a/, and /i/, dominant in low and mid frequencies, respectively, and by amplitude-modulated fricatives /s/ and /∫/, dominant in high frequencies. In a subset of 20 infants, the in-ear stimulus level was adjusted to match that of an average adult ear (65 dB sound pressure level [SPL]). We found that (a) adult–infant differences in EFR amplitude, signal-to-noise ratio, and intertrial phase coherence were larger and spread across the frequency range when in-ear stimulus level was adjusted in infants, (b) adult–infant differences in EFR characteristics were the largest for low-frequency stimuli, (c) infants demonstrated adult-like phase coherence when they received a higher (i.e., unadjusted) stimulus level, and (d) EFR phase coherence and signal-to-noise ratio changed with age in the first year of life for a few F2+ vowel stimuli in a level-specific manner. Together, our findings reveal that development-related changes in EFRs during infancy likely vary by stimulus frequency, with low-frequency stimuli demonstrating the largest adult–infant differences. Consistent with previous research, our findings emphasize the significant role of stimulus level calibration methods while investigating developmental trends in EFRs.

About the Lab: Viji Easwar’s research focuses on the development of hearing in children with or without hearing loss. In particular, she is interested in investigating the effects of age, auditory deprivation, and hearing prostheses like hearing aids or cochlear implants on how sounds, particularly speech stimuli, are encoded by the auditory system using electroencephalography (EEG) techniques. In addition, she is interested in evaluating how these factors affect the ability of the auditory system to decipher where sounds are located in space. The goal of her research is to develop evidence that can help inform intervention strategies in children with hearing loss and extend the use of EEG techniques to clinical practice to help clinicians (audiologists) evaluate intervention outcomes in children. Visit the Child Hearing Lab. 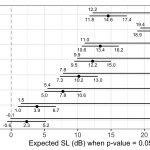 EEG is currently the only clinically feasible method to evaluate hearing in infants and children who are unable to participate in behavioral hearing tests. We modified naturally spoken vowels and fricatives to elicit envelope following responses (EFR) at low, mid and high frequencies–the prime spectral regions essential for speech understanding, and speech and language development. 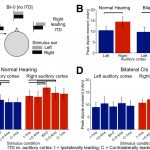