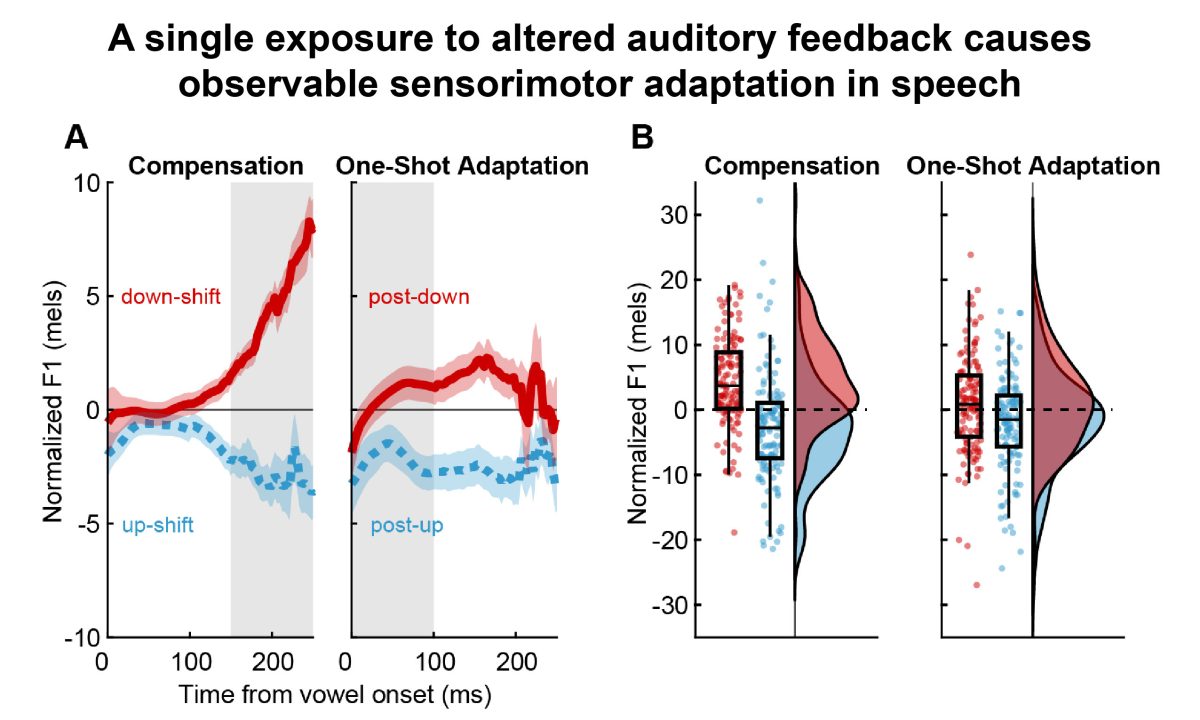 Legend: A: The average first formant frequency (F1) trajectory for vowels that were spoken during (“compensation”; at left) or immediately after (“one-shot adaptation”; at right) a perturbation to auditory feedback that shifted F1 up (blue) or down (red). B: The probability distribution and boxplot of participants’ average compensation (left) and one-shot adaptation (right) from trials occurring during or directly after up-shifted trials (blue) and down-shifted trials (red).

Abstract: Sensory errors caused by perturbations to movement-related feedback induce two types of behavioral changes that oppose the perturbation: rapid compensation within a movement, as well as longer-term adaptation of subsequent movements. Although adaptation is hypothesized to occur whenever a sensory error is perceived (including after a single exposure to altered feedback), adaptation of articulatory movements in speech has only been observed after repetitive exposure to auditory perturbations, questioning both current theories of speech sensorimotor adaptation as well as the universality of more general theories of adaptation. Thus, positive evidence for the hypothesized single-exposure or “one-shot” learning would provide critical support for current theories of speech sensorimotor learning and control and align adaptation in speech more closely with other motor domains. We measured one-shot learning in a large dataset in which participants were exposed to intermittent, unpredictable auditory perturbations to their vowel formants (the resonant frequencies of the vocal tract that distinguish between different vowels). On each trial, participants spoke a word out loud while their first formant was shifted up, shifted down, or remained unshifted. We examined whether the perturbation on a given trial affected speech on the subsequent, unperturbed trial. We found that participants adjusted their first formant in the opposite direction of the preceding shift, demonstrating that learning occurs even after a single auditory perturbation as predicted by current theories of sensorimotor adaptation. While adaptation and the preceding compensation responses were correlated, this was largely due to differences across individuals rather than within-participant variation from trial to trial. These findings are more consistent with theories that hypothesize adaptation is driven directly by updates to internal control models than those that suggest adaptation results from incorporation of feedback responses from previous productions.

About the Lab: The Niziolek lab studies how the feedback system functions in persons with aphasia, many of whom have deficits in speech production and error awareness. They are developing laboratory studies of speech skill learning that can be translated to training interventions for speakers such as these who have trouble consistently producing auditory targets. The lab’s proposed training consists of vocal games that map speech to a real-time visual display. These visual speech training games have the potential to be adapted into tools to improve speech production in individuals with speech impairment, including deaf speakers and children with developmental speech and language disorders.