The start of the Waisman Center’s Bone Dysplasia Clinic was a case of serendipity. It was 1980 and Richard Pauli, MD, a pediatric geneticist, had just arrived at UW-Madison. Over the course of the year, Pauli settled into his new role at UW Hospital. Then in 1981, he was approached by radiologist Len Langer, MD, with a strange request.

“He sort of sidled up to me one day and said something to the effect of, well, we need a bone clinic,” Pauli says. “We need someone to run it. I guess that’s you.”

Pauli had seen half a dozen or so kids with dwarfing disorders or other bone growth disorders during his fellowship in Seattle. “That half a dozen patients were enough that Len decided I would have to become the expert,” Pauli says. “So, that’s how the clinic began.” Originally, the clinic was housed in the Pediatric Orthopedics clinic at the hospital. But only a few years later, the clinic shifted to the Waisman Center as most caregivers involved in the clinic were based there.

That combination of good timing, an enterprising radiologist, and a bit of luck led to a clinic that is continuing to flourish more than 40 years later.

Bone dysplasias are a group of 400 or so disorders that affect bone development, neurological function, and cartilage growth. Achondroplasia, a condition that affects the cartilage in the body and results in dwarfism, is one of the most common bone dysplasias. These conditions often come with a host of related medical issues that require specialists and medical surveillance throughout the lifespan. Knowing this, Pauli designed the Bone Dysplasia Clinic to suit those needs.

Pauli’s model was highly collaborative and centered around providing the best care to his patients. “Our model was a little different than the model of some bone dysplasia clinics elsewhere. We decided to have one person, that ended up being me, be the equivalent of a primary care physician for the kids and their families. Then we had close collaborations with various specialists who would become involved as needed,” Pauli says. “So, it wasn’t interdisciplinary in the literal sense but certainly involved multiple disciplines.”

This model continues to be the clinic’s standard of practice, although now, the model functions with a much greater fount of information. Because when Pauli started the clinic, knowledge of these conditions was remarkably limited.

“If I think about what literature we had, there was fairly robust literature in terms of diagnosis. But extraordinarily little was known in terms of the expectations, natural history, appropriate interventions and virtually nothing known about development, differences in developmental trajectories and so forth,” Pauli says. “And so, besides trying to become an expert in what was already known, another piece of all of that was to try to utilize the clinic in a collaborative way with families to answer questions in order to actually provide care that was knowledge-based as opposed to guessing. Honestly, at the beginning, a lot of it was guessing.”

Now, families come from all across the country and even around the world for the specialized care and expertise provided by the clinic. The Konechne family, from Minnesota, is one of those families.

Kelly and Chris Konechne’s first child Teddy was born in 2015 with achondroplasia. Neither knew much about the condition or what to expect for their child. Only a few weeks after Teddy’s diagnosis, Kelly and Chris attended an event in Minneapolis by the organization Little People of America. There they heard talk of Janet Legare, Peggy Modaff, and the Waisman Center’s Bone Dysplasia Clinic.

Janet Legare, MD, a pediatrician in Clinical Genetics, is the physician who gradually took over the Bone Dysplasia Clinic as Pauli retired. Peggy Modaff, MS, CGC, a genetic counselor, has been a backbone of the clinic for more than two decades. Together, Legare and Modaff have continued to provide extraordinary care for the patients who come through the clinic.

Kelly and Chris quickly brought Teddy to the Waisman Center to have him evaluated by the Waisman team. “At the [Little People of America event], everybody mentioned Dr. Legare and Peggy. They all spoke so highly of them so we wanted to get connected right away,” Kelly says. “So, we set up an appointment and went from there.”

Teddy is now six and a half years old and continues to be seen regularly by Legare and Modaff.

“The great majority of our families are not local. Like Teddy’s family, they’re coming from Minnesota or other states,” Modaff says. “So, it is really important to ask what do we need to get done while they’re here? What other specialists are they seeing that are attending to their other medical needs locally? It does require a bit of coordination.”

Legare is in communication with all of the other doctors working with her patients to stay informed on her patients’ overall health to help better plan their care in the future. “I’d like to say we provide multidisciplinary care but its not necessarily a multidisciplinary clinic,” Legare says. “For example, Teddy’s ENT (ear nose and throat physician or an otolaryngologist) is at Sanford in South Dakota. His neurosurgeon is in the Twin Cities. And we all communicate. Peggy is great at coordinating specialists in Madison when patients come, and remembering which specialists are where.”

That coordination of care is immensely helpful for Kelly and her family, especially as they are coming to Waisman from a distance. “It has been absolutely amazing. They have blown us away in terms of their professionalism and the fact that they care so much. They’re all just so friendly,” Kelly says. “And having the [Waisman Center] be able to look at all the different pieces for each of the boys has been a huge benefit.”

Kelly and Chris’ second child Joe was born with Down syndrome. Since they were already bringing Teddy to Waisman, Legare and Modaff recommended that Joe be seen at Waisman’s Down Syndrome Clinic. So now, Modaff coordinates both Teddy’s and Joe’s appointments to be at the same time to make it easier for the family.

Kelly is grateful for the care they have received at the Waisman Center and will continue to bring her family to the Bone Dysplasia Clinic and the Down Syndrome Clinic as long as they need. “They’re there to answer questions and help us along the way. It gives us comfort as parents knowing that we have them on our team and can reach out at any point,” Kelly says. “They’re just so welcoming, friendly and helpful. That’s really nice for us to have that peace of mind.”

The Bone Dysplasia Clinic will be moving to the UW Health Clinic site on Deming Way and begin seeing patients there on July 13.

The UW Center for Human Genomics and Precision Medicine at the UW School of Medicine and Public Health recently opened its first patient clinic, the UW Undiagnosed Genetic Disease Clinic at the Waisman Center. 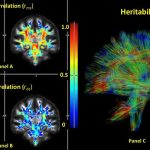 Brain structure isn’t always the first thing that comes to mind when we think about what we inherited from our biological parents or share with our siblings. We mostly think about facial features, hair color, and even personality.

The lab of Kris Saha at the University of Wisconsin–Madison has developed an innovative combination of gene-editing tools and computational simulations that can be used to develop new strategies for editing genes associated with genetic disorders.