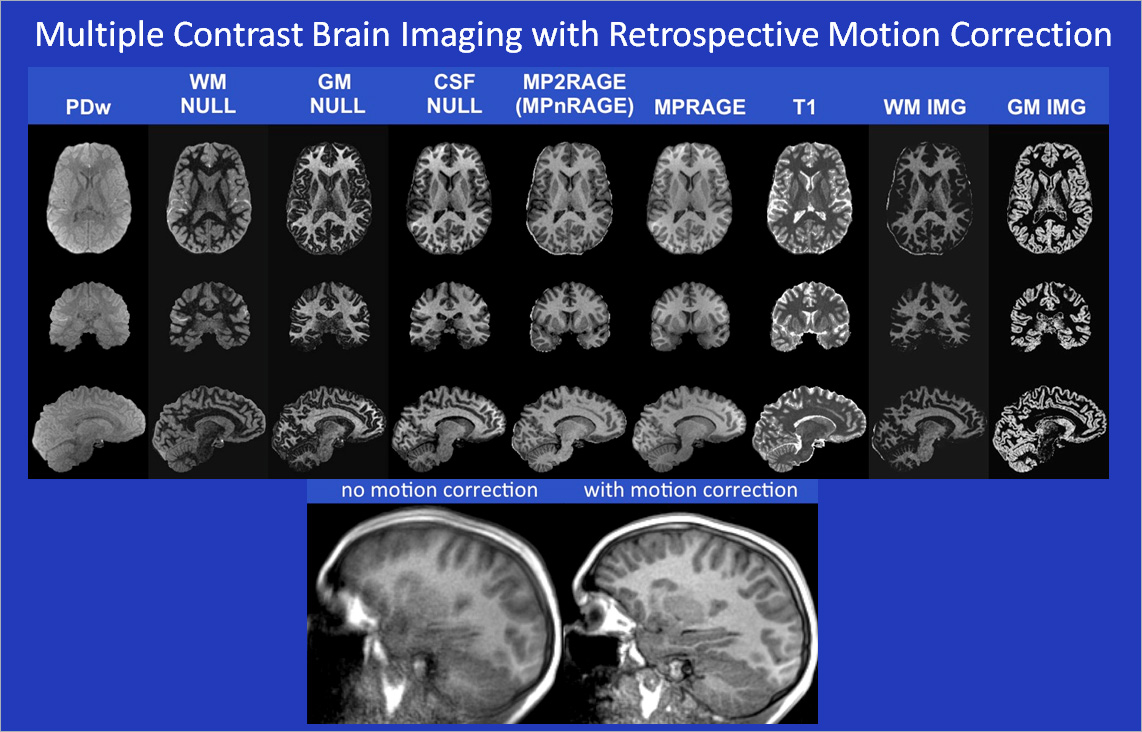 Purpose:  To introduce a new technique called MPnRAGE, which produces hundreds of images with different T1 contrasts and a B1 corrected T1 map.

Theory and Methods:  An interleaved 3D radial k-space trajectory with a sliding window reconstruction is used in conjunction with magnetization preparation pulses.  This work modifies the SNAPSHOT-FLASH T1 fitting equations for radial imaging with view-sharing and develops a new rapid B1 correction procedure. MPnRAGE is demonstrated in phantoms and volunteers, including 2 volunteers with 8 scans each and 8 volunteers with 2 scans each.   T1  values from MPnRAGE were compared with those from fast spin echo inversion recovery (FSE-IR) in phantoms and a healthy human brain at 3T.

Conclusions:  In the same amount of time as a traditional MPRAGE exam (7.5 minutes), MPnRAGE was shown to produce hundreds of images with alternate T1 contrasts as well as an accurate and reproducible T1 map that is robust to B1 errors.

About the Lab: Alexander’s research focuses on the use of magnetic resonance imaging (MRI) for mapping and measuring the functional and structural organization of the human brain. These techniques are used to investigate the brain in both typically developing individuals and subjects with developmental disorders including autism. Functional MRI (fMRI) is used to assess brain regions associated with cognition and affect and their dysfunctions in these populations. Diffusion tensor MRI (DT-MRI) is used to study the patterns of structural connectivity between brain activity regions. Anatomic imaging methods are used to assess longitudinal structural changes in brain regions. These measurements are ultimately compared with measures of affect, behavior and cognition in specific population groups.