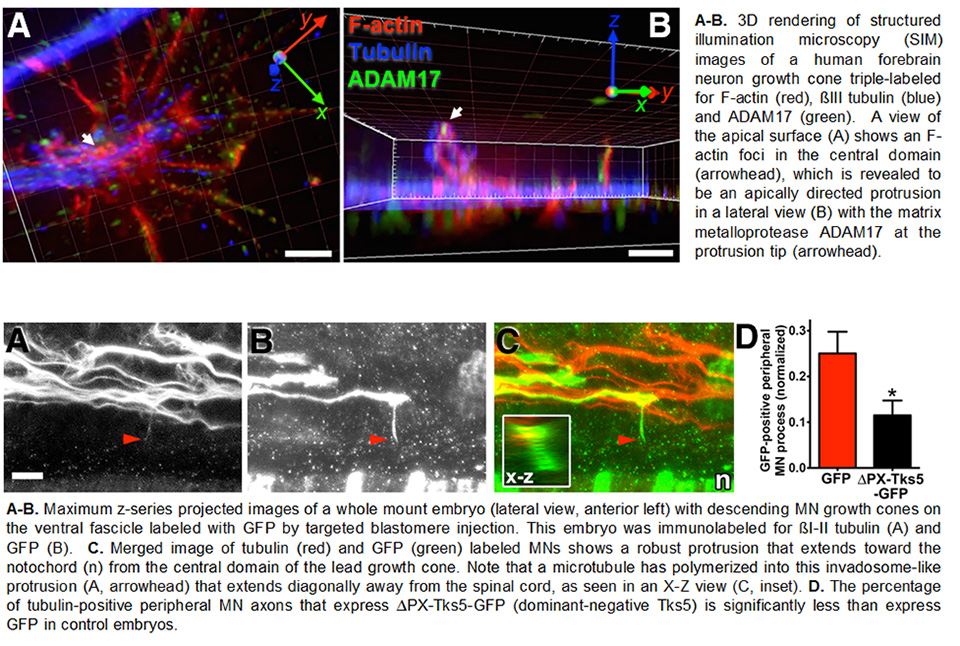 Legend: Top: A-B. 3D rendering of structured illumination microscopy (SIM) images of a human forebrain neuron growth cone triple-labeled for F-actin (red), ßIII tubulin (blue) and ADAM17 (green). A view of the apical surface (A) shows an F-actin foci in the central domain (arrowhead), which is revealed to be an apically directed protrusion in a lateral view (B) with the matrix metalloprotease ADAM17 at the protrusion tip (arrowhead). Bottom:  A-B. Maximum z-series projected images of a whole mount embryo (lateral view, anterior left) with descending MN growth cones on the ventral fascicle labeled with GFP by targeted blastomere injection. This embryo was immunolabeled for ßI-II tubulin (A) and GFP (B).  C. Merged image of tubulin (red) and GFP (green) labeled MNs shows a robust protrusion that extends toward the notochord (n) from the central domain of the lead growth cone. Note that a microtubule has polymerized into this invadosome-like protrusion (A, arrowhead) that extends diagonally away from the spinal cord, as seen in an X-Z view (C, inset). D. The percentage of tubulin-positive peripheral MN axons that express ∆PX-Tks5-GFP (dominant-negative Tks5) is significantly less than express GFP in control embryos.

Abstract:  Invadopodia and podosomes, collectively referred to as invadosomes, are F-actin rich basal protrusions of cells that provide sites of attachment to and degradation of the extracellular matrix (ECM).  Invadosomes promote tissue invasion of cells ranging from metastatic cancer cells to immune cells.  Here we show that neuronal growth cones form protrusions that share molecular, structural and functional characteristics of invadosomes.  Growth cones from all neuronal types and species examined, including a variety of human neurons, form invadosomes observed both in vitro and in vivo.  Growth cone invadosomes contain dynamic F-actin and several actin regulatory proteins, as well as Tks5 and matrix metalloproteases (MMPs), which locally degrade the matrix.  When viewed with 3D super resolution microscopy, F-actin foci often extend together with microtubules within orthogonal protrusions emanating from the growth cone central domain. Finally, inhibiting Tks5 function both reduces matrix degradation in vitro and disrupts motoneuron (MN) axons from exiting the spinal cord into the periphery. Together, our results suggest that growth cones use invadosomes to target protease activity during axon guidance through tissues.

About the investigator: The Gomez laboratory focuses on the intracellular mechanisms that regulate growth cone motility and behavior. Growth cones are sensory-motor specializations at the tips of all growing axons and dendrites that detect and transduce extracellular cues into guided outgrowth. Great advances have been made in recent years in our understanding of the factors that contribute to guided axon extension. Many new classes of ligands and their receptors have been discovered and we are beginning to appreciate how growth cones integrate multiple extracellular stimuli and convert those signals into stereotyped behaviors.