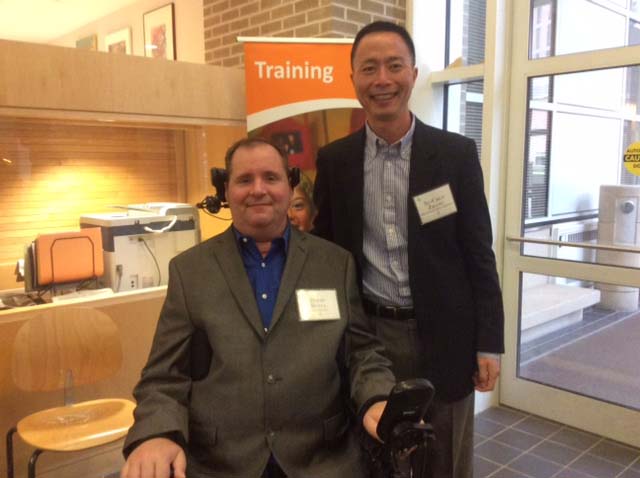 As basketball season gathers steam (go Badgers!), one small town in northern Wisconsin will be buzzing with excitement about a different basketball tournament on the Saturday after Thanksgiving.

Now in its 13th year, the David Busta Basketball Tournament and Silent Auction brings together hundreds of people in Chetek, WI, and has raised more than $400,000 to help further the research of Su-Chun Zhang, MD, PhD, at the Waisman Center.

On August 24, 2002, David Busta, BA ’97, suffered a severe, life-altering spinal cord injury from a fall. The subsequent physical and mental challenges that he faced fueled a determination to help propel forward research on spinal cord injuries and potential therapies.

Busta’s family, friends and community rallied in support and came together to make possible the first basketball tournament and silent auction. “When we held that first event we weren’t sure what to expect,” says Busta but through the inspiring “selflessness and positivity of everyone involved” it has become a great success as a fundraiser and a way to raise awareness about spinal cord injuries.

While searching for an organization to support, Busta turned to his alma mater, the University of Wisconsin-Madison, and in the Waisman Center has found a natural partner in his quest to support cutting-edge research on spinal cord injuries and treatments.

“It was important to me that the money we raised went directly to research,” says Busta, “and I believe that when the Waisman Center finds a cure, their approach will be the most natural and complete way to recover abilities lost due to a spinal cord injury.”

Busta’s connection to and affection for UW-Madison was also significant in his choice to support the Waisman Center. “My time as a student at UW played a role in my emotional development,” says Busta. “I hope it can now help me with a new step in my physical development.”

It is also important to Busta that research conducted at the Waisman Center benefits not only the search for a cure for spinal cord injuries, but also other neurodegenerative conditions like ALS, Alzheimer’s and Parkinson’s disease.

“David’s contributions provide meaningful and vital resources to the Waisman Center and help us advance scientific discoveries,” says Albee Messing, VMD, PhD, director of the Waisman Center. “We are incredibly grateful to David, his family and the community who participate in his fundraising efforts for their generous support.”

One recent discovery is a novel method to ‘edit’ the DNA in stem cells as they transition—or differentiate—into various kinds of cells, such as nerve cells. This innovative technique will allow scientists to understand the nuances of how stem cells differentiate into nerve cells and potentially make it easier to replicate the process in the lab and treat various diseases, disorders and injuries.

“David’s enthusiasm and dedication inspires us every day as we search for ways to treat conditions such as spinal cord injuries,” says Zhang. “His significant, long-term support has really helped me pursue many different research avenues.”

Much like any successful endeavor, the basketball tournament and silent auction has evolved over time. Starting with only a men’s tournament, the success of the event meant adding a women’s tournament within a few years. “Both men and women who compete look forward to playing every year and claiming the title has gained some prestige!” says Busta.

The event’s growth and success rests on the shoulders of many people, something that Busta recognizes. “I truly appreciate the efforts of all the people connected to this event,” he says, “and everyone that participates contributes in making it a success each year.”

Busta hopes that people leave the tournament and silent auction knowing a little more about how supporting research at the Waisman Center can help better the lives of the many. “I hope to someday be able to tell everyone who has contributed to our cause, ‘Here’s how you helped find a cure’,” he says.

You can learn more about David Busta, and the Basketball Tournament and Silent Auction here.