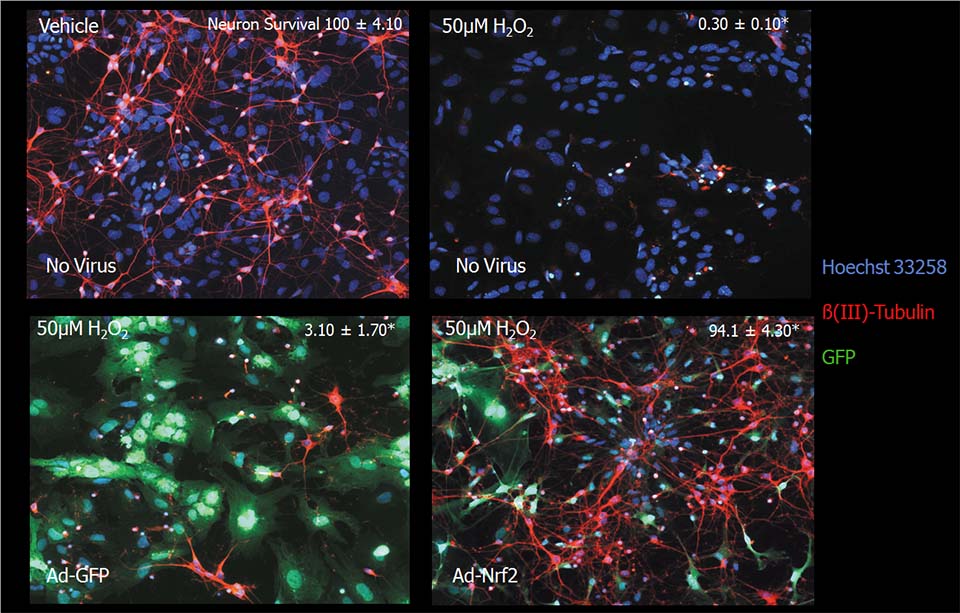 Abstract:
Binding of the transcription factor nuclear factor E2-related factor 2 (Nrf2) to the antioxidant response element (ARE) in neural cells results in the induction of a battery of genes that can coordinate a protective response against a variety of oxidative stressors. In this study, tert-butylhydroquinone (tBHQ) and sulforaphane were used as activators of this pathway. Consistent with previous studies, treatment of primary cortical cultures from ARE reporter mice revealed selective promoter activity in astrocytes. This activation protected neurons from hydrogen peroxide and nonexcitotoxic glutamate toxicity. tBHQ treatment of cultures from Nrf2 knock-out animals resulted in neither ARE activation nor neuroprotection. By reintroducing Nrf2 via infection with a replication-deficient adenovirus (ad), both the genetic response and neuroprotection were rescued. Conversely, infection with adenovirus encoding dominant-negative (DN) Nrf2 (ad-DN-Nrf2) or pretreatment with the selective phosphatidylinositol-3 kinase inhibitor LY294002 inhibited the tBHQ-mediated promoter response and corresponding neuroprotection. Interestingly, the adenoviral infection showed a high selectivity for astrocytes over neurons. In an attempt to reveal some of the cell type-specific changes resulting from ARE activation, cultures were infected with adenovirus encoding green fluorescent protein (GFP) (ad-GFP) or ad-DN-Nrf2 (containing GFP) before tBHQ treatment. A glia-enriched population of GFP-infected cells was then isolated from a population of uninfected neurons using cell-sorting technology. Microarray analysis was used to evaluate potential glial versus neuron-specific contributions to the neuroprotective effects of ARE activation and Nrf2 dependence. Strikingly, the change in neuronal gene expression after tBHQ treatment was dependent on Nrf2 activity in the astrocytes. This suggests that Nrf2-dependent genetic changes alter neuron–glia interactions resulting in neuroprotection.

About the investigator:  The focus of the Johnson laboratory is molecular neuropharmacology/neurotoxicology. Oxidative stress is believed to be a principal factor in the development of many chronic neurodegenerative diseases such as Alzheimer’s, Parkinson’s, Huntington’s and Amyotrophic Lateral Sclerosis. In general, oxidative stress can be defined as an imbalance in which free radicals and their products exceed the capacity of cellular antioxidant defense mechanisms. A gain in product formation or loss in protective mechanisms can disturb this equilibrium leading to programmed cell death (PCD). PCD occurs normally with the aging process but appears to be accelerated by the pathology of Alzheimer’s Disease, presumably due to increased oxidative stress caused by beta2-amyloid. We know, therefore, the driving force for the development of Alzheimer’s Disease; however, we have little knowledge of how the different genes and proteins contributing to antioxidant defenses are regulated in the brain. The goal of the Johnson laboratory is to discover ways to increase the defense mechanisms in the brain by activating multiple antioxidant defense genes simultaneously through activation of the antioxidant response element (ARE); a process we refer to a programmed cell life (PCL). Any increase in the forces that drive PCD must be balanced by increasing the forces driving PCL or the cell will die.