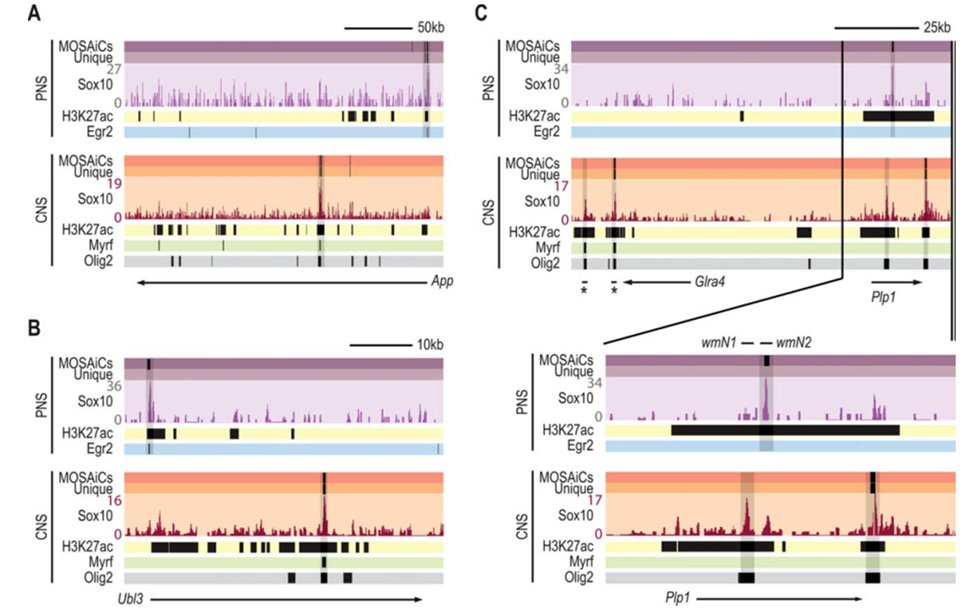 Title: The Sox10 transcriptional regulator binds genes important for myelin formation in both oligodendrocytes of the spinal cord and Schwann cells in peripheral nerves.

Legend:  The diagram shows data from next generation sequencing techniques (known as ChIP-seq) to identify elements of DNA controlled by Sox10, which is required for formation of myelin in the central and peripheral nervous systems. Although these genes are expressed in both cell types, Sox10 employs unique binding sites in (A) amyloid beta (A4) precursor protein (App), (B) ubiquitin-like 3 (Ubl3), and (C,D) Proteolipid protein 1 (Plp1) loci. The Plp1 gene is altered in a white matter disease known as Pelizaeus-Merzbacher disease.

About the lab: The Svaren laboratory is focused on the transcriptional and epigenetic regulation of myelination. Myelin is a vital constituent of the nervous system that increases the speed of action potentials, and also provides trophic support for the long axons that project from neurons. Their studies are centered on the myelin-producing cells of the peripheral nervous system, called Schwann cells. The Svaren lab has focused on elucidating gene regulation of individual myelin genes by two major regulators of Schwann cell function: Egr2 and Sox10. Sox10 is required at virtually all phases of Schwann cell development and Egr2 is required for initiation of myelination. They have also recently characterized enhancers within the Pmp22 gene, which is duplicated in the most common form of Charcot-Marie-Tooth Disease, classified as CMT1A. These studies are aimed at developing novel screening assays to identify drugs that could be used for this very common peripheral neuropathy.