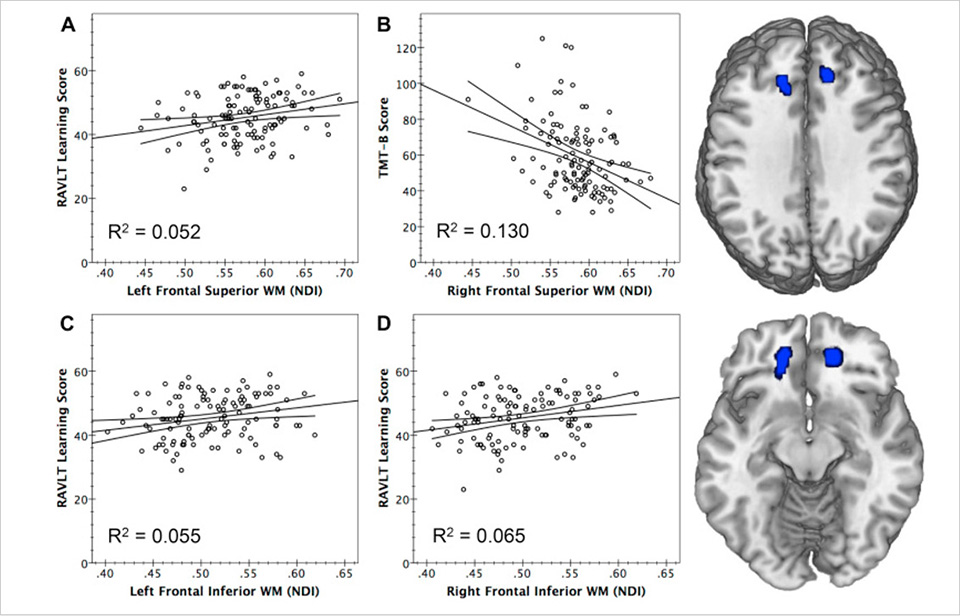 Abstract:  Human aging is accompanied by progressive changes in executive function and memory, but the biological mechanisms underlying these phenomena are not fully understood. Using neurite orientation dispersion and density imaging, we sought to examine the relationship between age, cellular microstructure, and neuropsychological scores in 116 late middle-aged, cognitively asymptomatic participants. Results revealed widespread increases in the volume fraction of isotropic diffusion and localized decreases in neurite density in frontal white matter regions with increasing age. In addition, several of these microstructural alterations were associated with poorer performance on tests of memory and executive function. These results suggest that neurite orientation dispersion and density imaging is capable of measuring age-related brain changes and the neural correlates of poorer performance on tests of cognitive functioning, largely in accordance with published histological findings and brain-imaging studies of people of this age range. Ultimately, this study sheds light on the processes underlying normal brain development in adulthood, knowledge that is critical for differentiating healthy aging from changes associated with dementia.

About the investigator: Bendlin’s work focuses on brain structure and function in middle and late age, especially in people with increased risk of developing AD due to parental family history, genotype and vascular risk factors. Understanding early brain changes in people who may go on to develop AD is expected to lead to earlier diagnosis, prevention, and the development of new therapies for AD. Her current projects use MRI as a tool to understand the effect of risk factors (parental family history, genotype, Metabolic Syndrome) on brain blood flow and structure. Additionally, she is funded to examine the relationship between cerebrospinal fluid biomarkers and brain structure to learn more about early mechanisms of brain damage in AD.