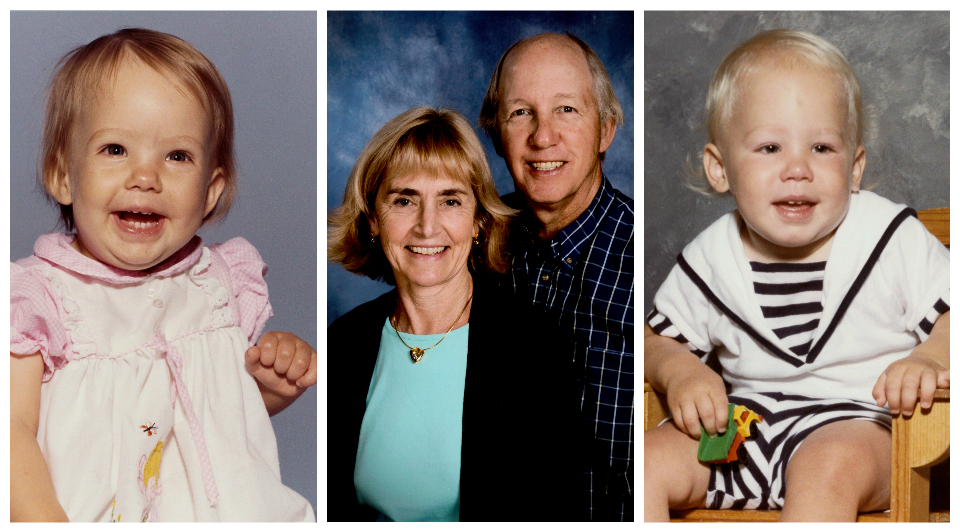 In their photographs, Jenni and Kyle Geurkink look like happy, healthy children. Jenni has a captivating smile and a twinkle in her eyes. Kyle is a sturdy toddler who loves brooms, mops and any occasion to laugh. First Christmases, first birthdays, first playtimes with cousins—these are just a few of the images of Jenni and Kyle shared by their mother, Sally Wilmeth. “They were regular, healthy children, who were meeting all of their developmental milestones,” she says. “There was no reason to think anything to the contrary. We had no idea what was coming.”

Jenni and Kyle would both succumb to an unknown and unidentified degenerative neurological disorder before their fourth birthdays.

In their memory, Sally and Terry Geurkink—her husband and their father—recently established the Jenni and Kyle Professorship in Novel Neurodevelopmental Diseases at the Waisman Center. Their $500,000 gift enhances the Waisman Center’s mission to advance knowledge about developmental disabilities and expand research on rare diseases.

“The Waisman Center was always there for us and they continue to be at the forefront of understanding the human brain,” says Sally. “We know there are families out there like ours and we were inspired to do something that will help them.”

The funds were matched by a portion of John and Tashia Morgridge’s recent $100 million gift to UW-Madison to support faculty excellence. The Jenni and Kyle Professorship begins September 1, 2016 and includes approximately $40,000 per year in flexible research funding for five years.

“Research into rare diseases is often threatened by a lack of awareness and shortage of funds,” says Albee Messing, VMD, PhD, a professor of neuropathology and the director of the Waisman Center. “The Jenni and Kyle Professorship is an extraordinary gift and generous investment in the future of rare disease research, and will give hope to future generations of children and their families who face these challenges.”

For Sally and Terry, both doctors themselves, the difficult journey began when Jenni was 18 months old. Until then Jenni was an active child who was on track, developmentally, for her age—she sat, crawled, rolled over and cruised but she hadn’t yet begun to walk independently. Sally mentioned concerns to their pediatrician but was assured that everything was fine—Jenni was just going to be a late walker.

However, one day Sally noticed that Jenni’s balance didn’t seem quite right and decided to seek a second opinion. She called the Waisman Center, where Jenni was seen initially by Tina Iyama, a developmental pediatrician, who agreed that Jenni’s condition was more serious than delayed walking. Tina noticed problems with Jenni’s muscle tone and sought assistance from her colleagues at the Waisman Center. Thus began a process of ordering a series of tests to identify possible causes of Jenni’s condition, treatment options and the search for a diagnosis. Answers never came.

Doctors were unable to diagnose Jenni’s deteriorating health, in spite of her medical results being sent throughout the United States and Canada for analysis. The general consensus, at that time, was that her condition was not genetic. This was a relief to Sally and Terry, as shortly after they began investigating Jenni’s condition, Sally had become pregnant with their son, Kyle.

Kyle was born in November 1982. When he was born, Sally and Terry did not suspect that anything was wrong with him. But as Kyle thrived, Jenni continued to decline. She had remained active and vibrant, but she was getting weaker and still not walking. She celebrated her third birthday in May 1983, and that summer her health abruptly took a turn for the worse. By the end of August, Jenni was functionally paralyzed and no longer able to speak. Sally and Terry didn’t know what to expect. “We had no idea what was coming, because there was no name and no diagnosis,” says Sally.

Around this time, a common childhood illness signaled concerns about Kyle. He had developed an ear infection, which was accompanied by slight tremors. After consulting with their pediatric neurologist and doctors at the Waisman Center, Sally and Terry suspected that Kyle had the same medical condition as Jenni. “We still didn’t know what to expect,” says Sally, “but at least we knew we had to prepare ourselves emotionally for what would happen to Kyle.”

The final seven months of Jenni’s life were very difficult. In May 1984, just short of her fourth birthday, Jenni passed away. Tests after her death revealed abnormalities of myelination and neurons in her brain, but pathologists were still unable to attribute her condition to any known disease. Two years later, a few months short of his fourth birthday, Kyle passed away as well.

“When we could not get a diagnosis or answers about our sick children, it was a really difficult experience. It’s not only that there is no treatment, but we had no idea about what the future might hold. It was devastating,” says Sally.

Establishing the Jenni and Kyle Professorship is one way Sally and Terry can honor the memory of their daughter and son. “We want to support innovative research that we hope will provide answers about unknown disorders and help families like ours,” says Sally. “There is so much still to learn and discover.”

The first recipient of the Jenni and Kyle Professorship is Xinyu Zhao, a professor in the Department of Neuroscience and a Waisman investigator. Zhao’s research focuses on understanding the development, behavior and function of neural stem cells and their implications for developmental disorders, such as fragile X syndrome, Rett syndrome, and autism-related disorders.

“I am honored to be the first recipient of the Jenni and Kyle Professorship. Thank you to Sally and Terry for their generous gift in memory of their children” says Zhao. “Even though my research will not help Jenni and Kyle, it may impact other children and their families in the future. This gift inspires us to continue to advance science and provides hope that answers and treatments may be found for novel neurodevelopmental diseases.”