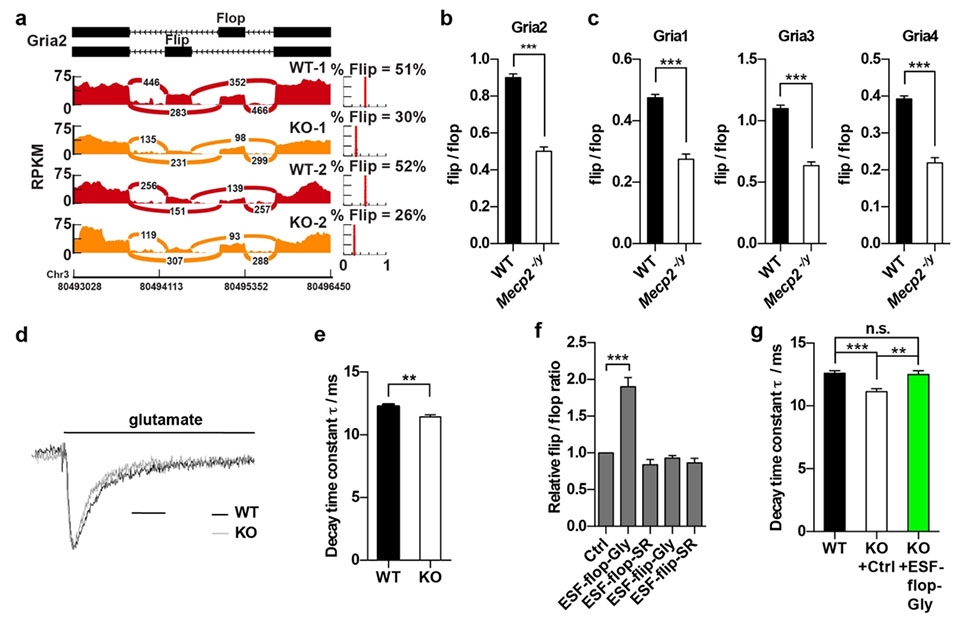 Abstract: Mutations in the human MECP2 gene cause Rett syndrome (RTT), a severe neurodevelop- mental disorder that predominantly affects girls. Despite decades of work, the molecular function of MeCP2 is not fully understood. Here we report a systematic identification of MeCP2-interacting proteins in the mouse brain. In addition to transcription regulators, we found that MeCP2 physically interacts with several modulators of RNA splicing, including LEDGF and DHX9. These interactions are disrupted by RTT causing mutations, suggesting that they may play a role in RTT pathogenesis. Consistent with the idea, deep RNA sequencing revealed misregulation of hundreds of splicing events in the cortex of Mecp2 knockout mice. To reveal the functional consequence of altered RNA splicing due to the loss of MeCP2, we focused on the regulation of the splicing of the flip/flop exon of Gria2 and other AMPAR genes. We found a significant splicing shift in the flip/flop exon toward the flop inclusion, leading to a faster decay in the AMPAR gated current and altered synaptic trans- mission. In summary, our study identified direct physical interaction between MeCP2 and splicing factors, a novel MeCP2 target gene, and established functional connection between a specific RNA splicing change and synaptic phenotypes in RTT mice. These results not only help our understanding of the molecular function of MeCP2, but also reveal potential drug targets for future therapies.

About the investigator: Chang’s long-term goal is to understand the molecular mechanism underlying DNA methylation-dependent epigenetic regulation of brain functions. His current focus is on the central role of MeCP2 (methyl-CpG binding protein 2), a molecular linker between DNA methylation and chromatin remodeling and transcriptional control, in the development and function of the nervous system. The functional significance of such a molecular linker is highlighted by the fact that mutations in the MECP2 gene cause Rett syndrome (RTT), a debilitating neurodevelopmental disorder that shares many features with autism. His studies include basic research aimed at understanding the function of MeCP2 and translational research aimed at understanding disease pathology and developing effective treatment. These two types of research are tightly interwoven—the need to solve a practical problem in translational research will always influence the direction of basic research; and fundamental mechanisms revealed by basic research will ultimately guide the effort in treating/curing the disease.