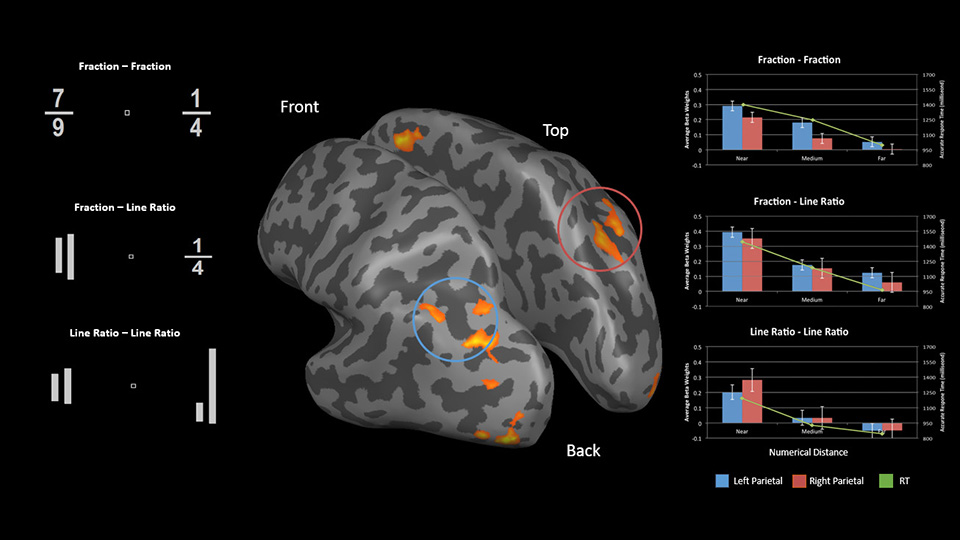 Legend: Left: Adult participants were asked to compare pairs of fractions (top), combinations of fractions and line ratios (middle) or pairs of line-ratios (bottom), while we recorded accuracy and reaction time (RT). Pairs were chosen so that some were “near” (i.e., similar, like 5/7 vs. 7/9), medium or “far” (like 1/7 vs. 8/9).  Middle: Brain areas in the parietal lobes were more active when adults decide which of two fractions was larger compared they were near compared to when they were far (left = red circle, right = blue circle). Right: Detailed analyses showed that decreases in brain activity in parietal cortex (red and blue bars) closely matched the decreases observed behaviorally for all three pair types.  These data help to demonstrate that comparing non-symbolic line ratios and symbolic fractions depend on shared neural systems, further supporting the idea that fractions might arise from more basic brain systems for dealing with ratios.

Abstract: A fundamental question in numerical cognition is how we retrieve the meaning of number symbols-the “symbol grounding problem”. To address the symbol grounding problem for fractions, we have recently argued that the brain contains a ratio processing system (RPS) adapted to perceiving non-symbolic ratios (e.g. the ratio of two line lengths; Lewis, Matthews & Hubbard, 2015), and that the RPS provides an underappreciated neurocognitive startup tool upon which the meaning of symbolic fractions (e.g. ¾) can be built.  Although previous studies have demonstrated that the intraparietal sulcus (IPS) and prefrontal cortex (PFC) are involved in processing nonsymbolic ratios and symbolic fractions, no experiment has directly compared activation for these two classes of stimuli in the same participants. We tested the hypothesis that processing of symbolic fractions builds on the RPS by having adults compare the magnitudes of two fractions in three conditions: pairs of symbolic fractions, line ratios, or mixed line-fraction. Distance effects were observed in all three conditions; participants were faster and more accurate as the numerical distance between pairs increased.  Additionally, participants were faster and more accurate to compare line ratios than either condition containing symbolic fractions. Critically, activation of the bilateral IPS overlapped for all three conditions, with fMRI activation closely paralleling RT distance effects. We found greater activation when numerical distances were small compared to when they were close. These results suggest that the processing of symbolic fractions and non-symbolic ratios rely on similar neural regions sensitive to ratio magnitudes, consistent with the RPS account.

About the Lab: The Educational Neuroscience Lab explores questions at the intersection of education and neuroscience, in the emerging field of Educational Neuroscience. Our research examines the neural underpinnings of cognitive processes that are relevant for education, and the role of educational experiences and enculturation as primary drivers of brain plasticity to create the neural circuits that underlie human specific abilities. Our research combines the latest technological advances in understanding the human brain as a “learning organ” with insights from cognitive psychology and education to help build the emerging field of educational neuroscience.