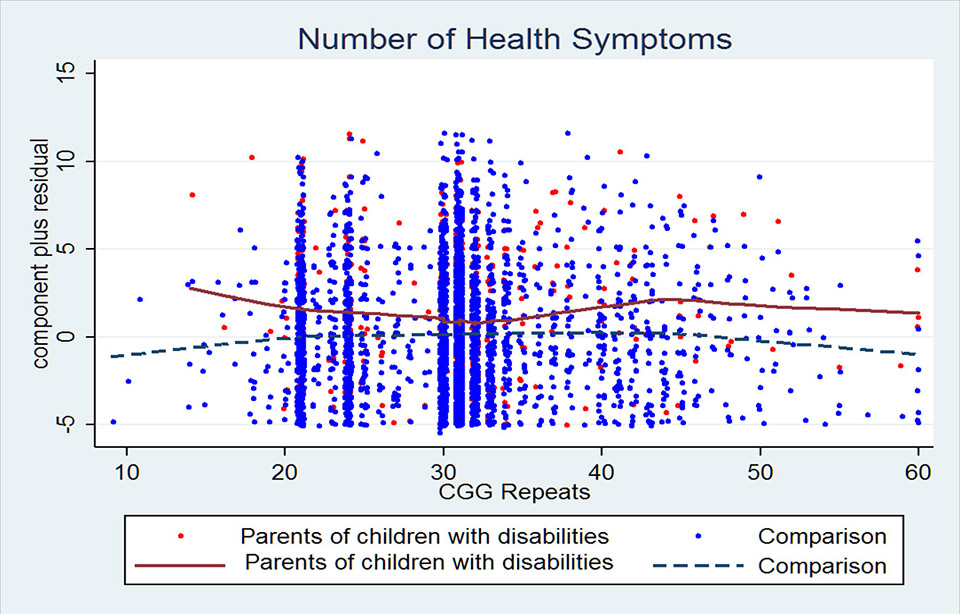 Abstract: This study investigated the association of genotype (CGG repeats in FMR1) and the health and well-being of 5628 aging adults (mean age = 71) in a population-based study. Two groups were contrasted: aging parents who had adult children with developmental or mental health disabilities (n = 785; the high-stress parenting group) and aging parents of healthy children who did not have disabilities (n = 4843; the low-stress parenting group). There were significant curvilinear interaction effects between parenting stress group and CGG repeats for body mass index and indicators of health and functional limitations, and the results were suggestive of interactions for limitations in cognitive functioning. Parents who had adult children with disabilities and whose genotypes were two standard deviations above or below the mean numbers of CGGs had poorer health and functional outcomes at age 71 than parents with average numbers of CGGs. In contrast, parents who had healthy adult children and who had similarly high or low numbers of CGG repeats had better health and functional outcomes than parents with average numbers of CGGs. This pattern of gene by environment interactions was consistent with differential susceptibility or the flip-flop phenomenon. This study illustrates how research that begins with a rare genetic condition (such as fragile X syndrome) can lead to insights about the general population and contributes to understanding of how genetic differences shape the way people respond to environments.

About the Lab:  The Lifespan Family Research Program conducts research about families who have a member with a disability, with a special emphasis on how these families change over the lifespan. Currently, our program of research encompasses longitudinal and population-based studies of autism and fragile x syndrome, and we develop evidence-based interventions for affected families. One recent project includes investigation of genotype-phenotype correlations between the full range of CGG repeats in the FMR1 gene and outcomes such as cognition and physical and mental health.