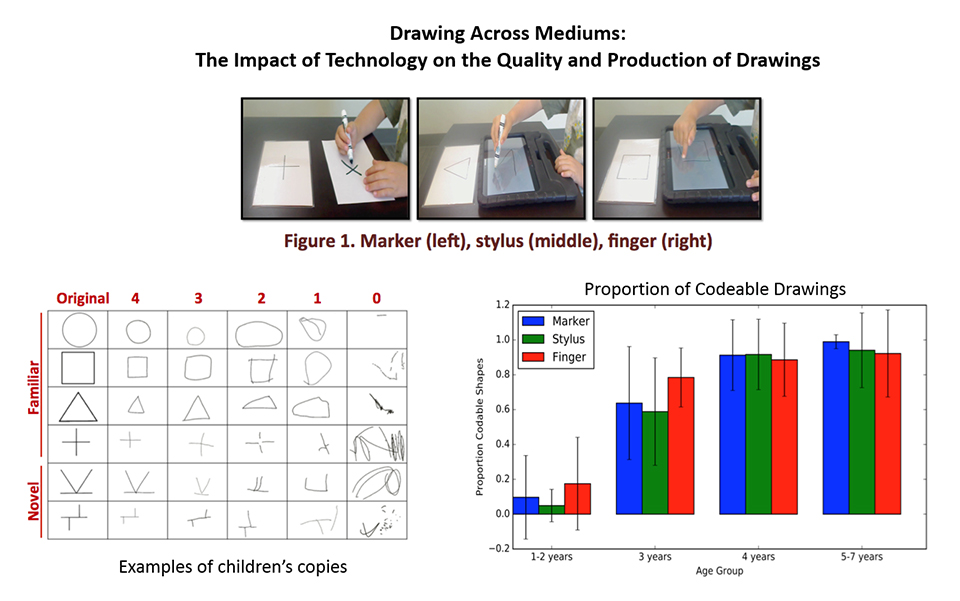 Title: Drawing Across Mediums: The Impact of Technology on the Quality and Production of Children’s Drawings.

Legend: Examples of the task, children’s shape copying and the proportion of codeable shapes produced by children using either a marker on paper, a specially designed stylus on a tablet, or their finger on the tablet.

Abstract: Children’s drawings have long been used to assess aspects of general cognitive functioning, intelligence, perceptual motor development, and even socio-emotional development. Recently, practitioners have begun to perform drawing assessments using tablets and other forms of media; yet there has been little to attempt to validate these methods. One goal of the current study was to examine the impact of drawing using different drawing implements (finger or stylus) or different media (paper or tablet) on the quality children’s drawings. We were also interested in whether changes in implement or media would alter the process of children’s drawing. Children (age 1.5 to 7.5 years) copied a series of novel and familiar shapes using a finger, maker, or stylus on paper or a tablet. Younger children drew more codeable shapes with a finger, while older children produced lower quality drawings with their finger. Changing drawing media (paper or tablet) disrupted the sequence of drawing more than changing the implement (finger or marker). These results suggest that technology does impact children’s drawing in important ways.

About the Lab: Rosengren’s Cognition in Action Laboratory in the Waisman Center focuses on children’s cognitive and motor development, with a particular emphasis on how cognitive and motor factors interact in everyday tasks. Drawing behavior is one example of behaviors examined in the lab that involve a dynamic interaction between young children’s planning and executive skills on the one hand and children’s motor control on the other. Other behaviors investigated include children’s action errors, behaviors where young children attempt to pick up objects in a photograph or attempt to perform an action on object that is too small to accommodate the action (scale errors). By studying these behaviors we hope to gain insight into factors that influence the development of young children’s representations of symbols, objects and themselves.