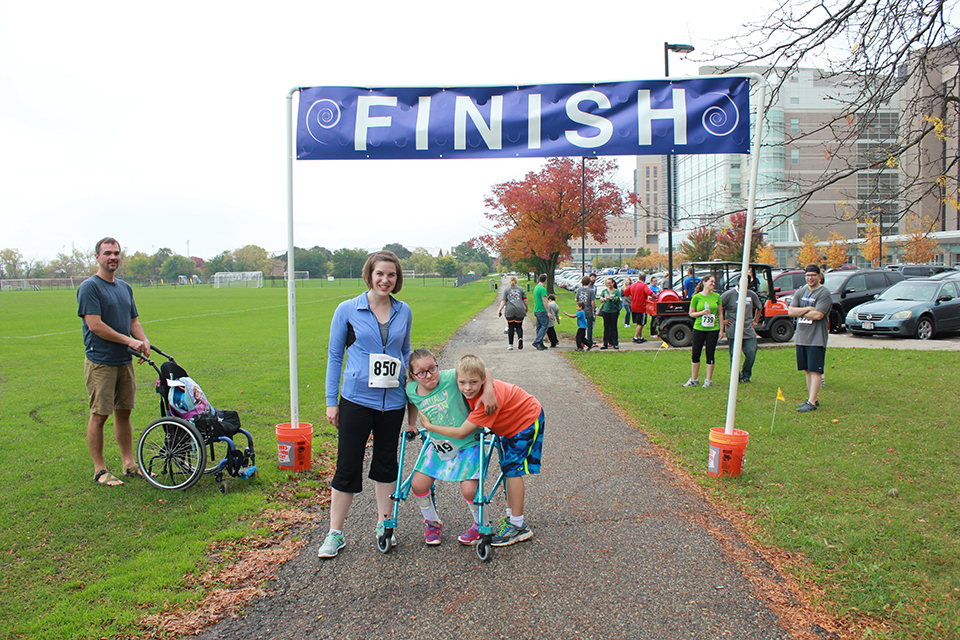 10-year-old Lauren Tierney had only walked a mile a few times before.

Yet here she was, on a cool October morning, at the starting line for the Waisman Whirl Run Walk & Roll for All Abilities, getting ready to tackle the mile loop. Her bright pink sneakers matched her glasses, her blue walker complemented her teal t-shirt, which proudly proclaimed, “Actually, I can, and I will.”

But would she finish her first official mile walk?

Lauren was born prematurely in March, 2006. She spent the first month and a half in the hospital, where she was diagnosed with cerebral palsy. She has not let her diagnosis slow her down, and she gets around fabulously using her wheelchair, but she has trouble balancing or walking by herself.

“I actually had a big goal of balancing by myself for seven minutes,” says Lauren, “and my OT promised me a cupcake if I could do it.” Some months before the Waisman Whirl, Lauren succeeded in her quest for balance and a cupcake.

The Waisman Whirl wasn’t Lauren’s first race, but it would be the longest. She took part in the Henry Vilas Zoo’s quarter-mile walk in 2015, and then the half-mile walk in 2016, but these events weren’t without challenges.

“I wasn’t sure if I was going to be able to finish the half-mile walk,” says Lauren.

“Do you remember what you said at the end of that walk?” asks Adam Tierney, her father.

Lauren smiles shyly as she remembers. “I am never going to do another one.”

It takes Lauren several times more effort to walk the same distance as someone with typical development. Respiratory tests done when Lauren was younger showed that when Lauren walked using crutches or a walker, she uses seven times more energy compared to typically developing children.

Lauren was evaluated for a baclofen pump at the Waisman Center, where she also had her pre- and post-pump follow-ups for a year. “Without my pump, I probably would never have been able to walk even a quarter mile,” she says.

But four times the energy expense meant that a mile walk for Lauren is similar to a four-mile walk for her brother, Alex Tierney.

When Lauren set out on her mile-long Waisman Whirl adventure using her walker, and accompanied by her brother, her father, and Kathleen Kubisiak, her personal care and respite worker, she remembers how difficult it was.

“The terrain was really hard,” she says, “and I fell down, twice.”

Her father remembers the falls: “You skinned yourself, and you were bleeding a little bit. To be honest, that’s a point where I wasn’t sure if you were going to finish the walk, because we still had a way to go.”

“I wasn’t sure either,” says Lauren. “I got back up and started crying, but I didn’t want to stop.” She looks at her brother and says, “You helped a lot. I looked at you and thought, ‘If he can do it, I can do it too.’”

Adam and Sandy had decided that they would have open conversations about cerebral palsy as soon as Lauren was able to talk and understand. And while cerebral palsy is a big part of her life – one year she had more than 200 appointments connected with her diagnosis – “there is a lot more to Lauren,” says her father.

Lauren loves school and learning. “I have been lucky to have some awesome teachers at school, and when I grow up, I want to be a teacher as well,” she says firmly. “I also want to be a self-advocate and teach people about children with special-needs.”

She also loves to travel and has gone special-needs skiing in Montana, sailing off of the French coast, free-swimming in the deep ocean at a coral reef preserve, and zip-lining in Belize.

“If you are in a speedboat, Lauren will be the one saying, ‘Go faster! Go faster!’ says her mother.

When the Tierney family returned to Key West for a vacation, Lauren learned that she had achieved celebrity status at a local restaurant. “There’s a picture taken of her when she was 3 with 20 different hot sauces that she had tried,” says her father, “and when we introduced ourselves, one of the newer employees asked her, ‘Are you THE Lauren [of hot sauce fame]?’”

Lauren would need all her energy and perseverance to finish the Waisman Whirl. The couple of falls along the course had shaken her, but she pressed on. But by the time the finish line came into view, she was struggling. “It was really tough,” she says, “but I thought about my shirt and found it really helped if I screamed, “Actually, I can, and I will!”

More than one hour and 42 minutes after she set out with her family, respite worker, and walker, Lauren Tierney crossed the finish line.

“I decided I wasn’t going to walk for the rest of the day,” she says. And she didn’t.

The 2019 Waisman Whirl 10k, 5k and 1 mile Run, Walk & Roll for All Abilities will be held on October 6. For more information and to register, please visit waisman.wisc.edu/event/run-2019.

All proceeds from the Whirl benefit individuals and families affected by developmental disabilities and neurodegenerative diseases.