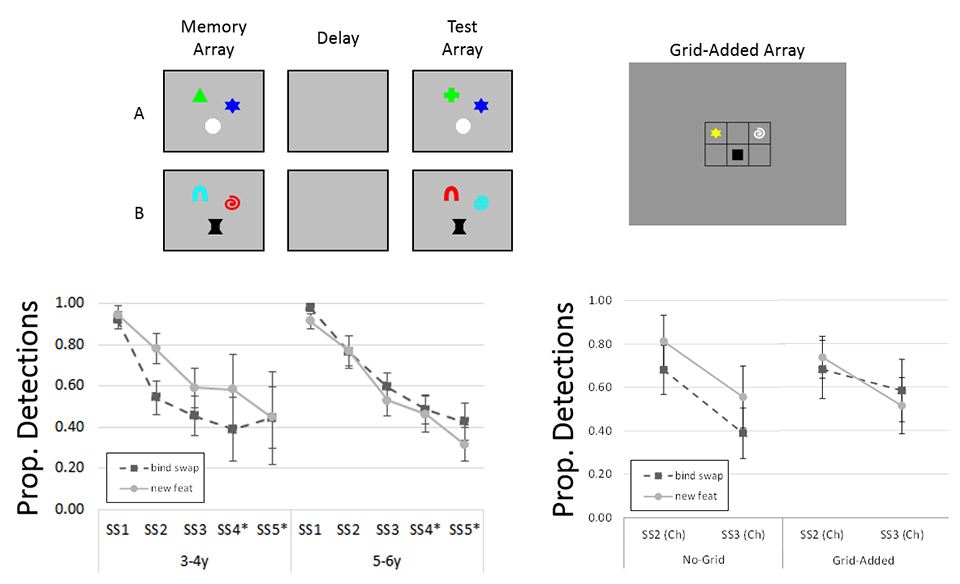 Legend: (Top left) Sample trials of a visual change detection task in which children remembered the objects in the memory array, then after a short delay identified whether the test array contained all of the same objects or any new objects. The test arrays show two types of changes: (A) new-feature change [triangle changed to cross]; (B) binding swap [colors swapped between the horseshoe and spiral]. (Bottom left) Experiment 1 results: Younger children, aged 3-4 years, were significantly worse at detecting binding-swap changes than new-feature changes, whereas slightly older children, aged 5-6 years, were equally good at both. (Top right) Our proposed explanation for this difference is that younger children have unstable representations of which features were where in the arrays, making it more difficult to detect when features swapped between objects. We tested this by adding a grid around the objects to see if this could augment young children’s binding-swap detection through more stable localization of features. (Bottom right) Experiment 2 results: Young children again showed impaired detection of binding-swap changes with the standard [no-grid] arrays, but with the grid added, detection of binding-swaps was significantly better than with no grid, and did not differ from detection of new-feature changes.

Abstract: Working memory is a basic cognitive process that predicts higher-level skills. A central question in theories of working memory development is the generality of the mechanisms proposed to explain improvements in performance. Prior theories have been closely tied to particular tasks and/or age groups, limiting their generalizability. The cognitive dynamics theory of visual working memory development has been proposed to overcome this limitation. From this perspective, developmental improvements arise through the coordination of cognitive processes to meet demands of different behavioral tasks. This notion is described as real-time stability, and can be probed through experiments that assess how changing task demands impact children’s performance. The current studies test this account by probing visual working memory for colors and shapes in a change detection task that compares detection of changes to new features versus swaps in color-shape binding. In Experiment 1, 3- to 4-year-old children showed impairments specific to binding swaps, as predicted by decreased real-time stability early in development; 5- to 6-year-old children showed a slight advantage on binding swaps, but 7- to 8-year-old children and adults showed no difference across trial types. Experiment 2 tested the proposed explanation of young children’s binding impairment through added perceptual structure, which supported the stability and precision of feature localization in memory—a process key to detecting binding swaps. This additional structure improved young children’s binding swap detection, but not new-feature detection or adults’ performance. These results provide further evidence for the cognitive dynamics and real-time stability explanation of visual working memory development.

About the Lab: In the Spatial Perception, Action, Cognition, and Embodiment (SPACE) Lab, we seek to understand how children and adults use visual memory for different purposes, and how they learn to adapt to their memory limitations. Through a combination of behavioral studies and computational modeling, we are investigating the types of brain changes that could produce improvements in children’s memory over development. We are particularly interested in understanding how children’s behavior changes as the demands of the tasks change, and whether we can leverage these effects of task to help children learn more quickly and use their knowledge more reliably when needed.