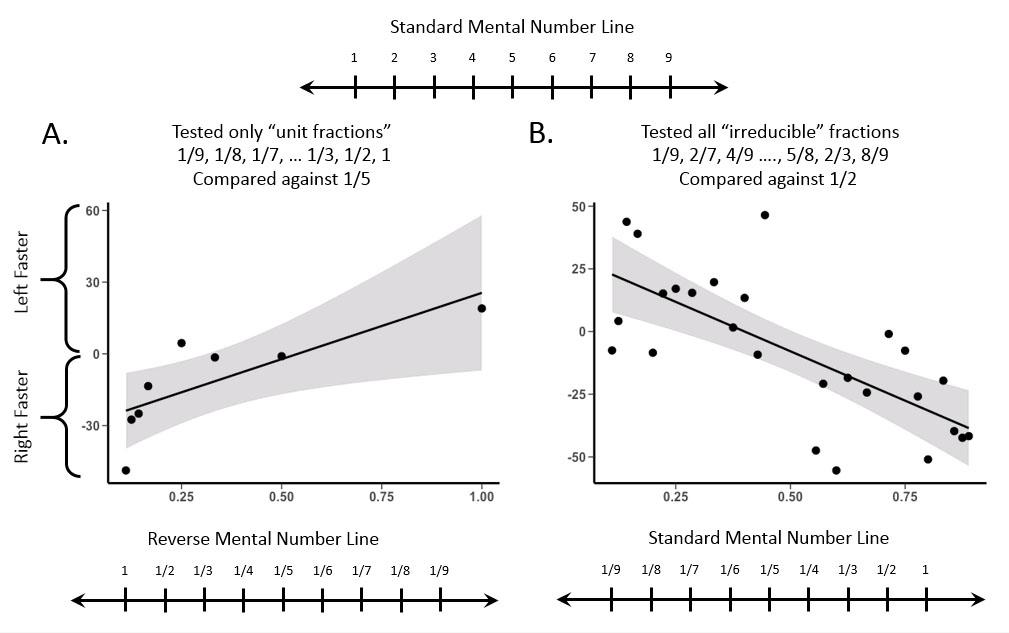 Legend: Reaction time patterns in a fractions comparison task. Panel A shows right minus left hand reaction times (RT; Right RT−Left RT=dRT) for each fraction as a function of overall fraction magnitude in Experiment 1. The direct relationship between fraction magnitude and dRT indicates a reverse spatial-numerical association of response codes (SNARC) effect. Shaded regions represent the 95% confidence interval. Panel B shows right–left reaction times for the comparison to 1/2 averaged across participants in Experiment 2. Reaction times were greater for small magnitudes and smaller for large magnitudes when responded to on the right side – a classic SNARC effect. Shaded region represents the 95% confidence interval.

Abstract: One of the key ways that we make sense of numbers is by creating a “mental number line”. Previous research with whole numbers has demonstrated that (at least in Western cultures) small numbers are thought of as being on the left side of space, and large numbers on the right (the “Standard Mental Number Line” shown on the top). Researchers demonstrate this by asking people to press one of two buttons depending on whether a number is smaller or larger than a memorized “standard” and measuring how long it takes people to respond (reaction time, or RT).  To account for differences in how fast different people respond, we take the difference between the left and right hand RTs (Right RT−Left RT=dRT). Faster responding on the left is shown by a positive dRT, and faster responding on the right by a negative dRT.  We can then show the overall pattern as the slope of the line going through the dRTs: a downward sloping line is associated with the “Standard Mental Number Line”, while an upward sloping line is associated with a “Reverse Mental Number Line”. Although this link between numbers and space has been known about for more than 20 years, little research had examined how people think of fractions on the mental number line.  One previous study had shown that people tend to think of large fractions like 1/2 as being on the left, and small fractions, like 1/8 or 1/9 as being on the right. However, our team thought that this might be due to a sort of mental “shortcut” that people could take in that study: because the experimenters chose to present only “unit fractions” that have 1 as the numerator (the top number), people could ignore the numerator and focus only on the denominator (bottom number).  This focus on denominators could lead to the “Reverse Number Line” shown in the bottom because people would be faster for small fractions/large denominators on the right, and for large fractions/small denominators on the left.  We replicated that previous study, and found exactly what they had found (part A). We then simply changed the fractions that were included to eliminate that possible shortcut and found that people could, and did, think of fractions on the Standard Mental Number Line that had been found for whole numbers (Part B).  This is important because fractions are particularly difficult for many children and adults, and getting them to think about fractions in the right ways might help them not only with fractions, but with other, more advanced math topics.

About the Lab: The Educational Neuroscience Lab explores questions at the intersection of education and neuroscience, in the emerging field of Educational Neuroscience. Our research examines the neural underpinnings of cognitive processes that are relevant for education, and the role of educational experiences and enculturation as primary drivers of brain plasticity to create the neural circuits that underlie human-specific abilities. Our research combines the latest technological advances in understanding the human brain as a “learning organ” with insights from cognitive psychology and education to help build the emerging field of educational neuroscience.