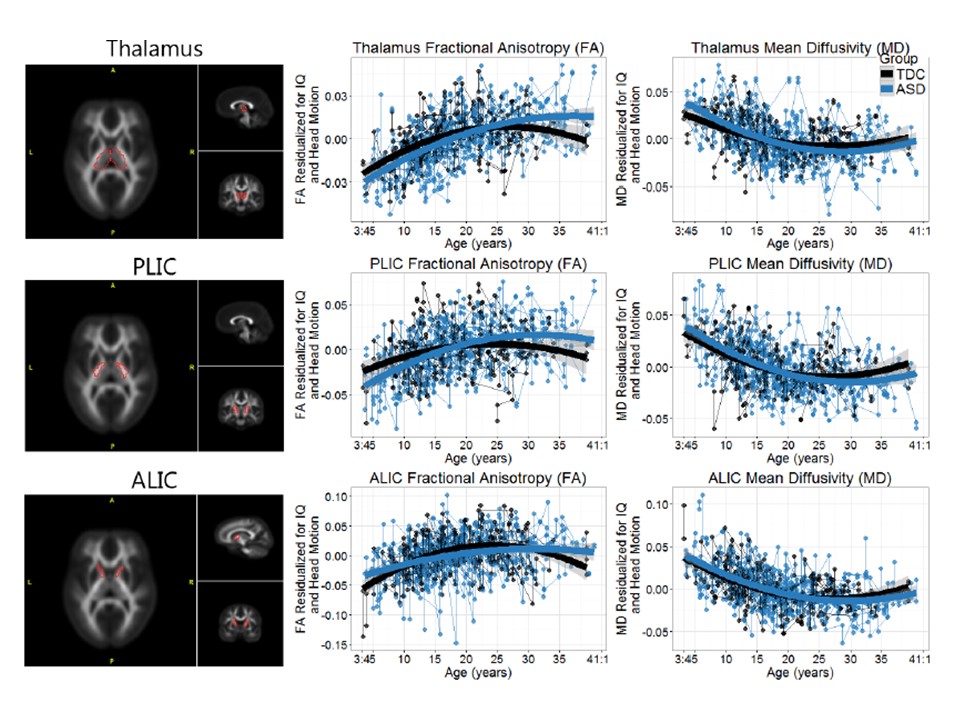 Legend: Diffusion tensor imaging metrics of the thalamus, the posterior limb of the internal capsule (PLIC), and the anterior limb of the internal capsule (ALIC) are plotted as a function of age in a group with autism spectrum disorder (ASD) and typically developing controls (TDC). Data have been adjusted for the head coil change, total head motion, and full scale IQ. Group-by-age interactions that remained significant after controlling for multiple comparisons are indicated by the * symbol.

Abstract: The thalamus is a key sensorimotor relay area that is implicated in autism spectrum disorder (ASD). However, it is unknown how the thalamus and white-matter structures that contain thalamo-cortical fiber connections (e.g., the internal capsule) develop from childhood into adulthood and whether this microstructure relates to basic motor challenges in ASD. We used diffusion weighted imaging in a cohort-sequential design to assess longitudinal development of the thalamus, and posterior and anterior limbs of the internal capsule (PLIC and ALIC, respectively) in 89 males with ASD and 56 males with typical development (3–41 years; all verbal). Our results showed that the group with ASD exhibited different developmental trajectories of microstructure in all regions, demonstrating childhood group differences that appeared to approach, and in some cases, surpass the typically developing group in adolescence and adulthood. The PLIC (but not the ALIC nor the thalamus) mediated the relation between age and finger-tapping speed in both groups. Yet, the gap in finger-tapping speed appeared to widen at the same time that the between-group gap in the PLIC appeared to narrow. Overall, these results suggest that childhood group differences in microstructure of the thalamus and PLIC become less robust in adolescence and adulthood. Further, finger-tapping speed appears to be mediated by the PLIC in both groups, but group differences in motor speed that widen during adolescence and adulthood suggest that factors beyond the microstructure of the thalamus and internal capsule may contribute to atypical motor profiles in ASD.

About the Lab: Research in the Lainhart lab focuses on understanding brain growth, development, and maturation in ASD from the prenatal period into adulthood. Lainhart leads a multidisciplinary research team that uses high-resolution brain scanning to determine changes in the brain that are specific to ASD and linked to clinical symptoms, course, and outcome. The goal of this research is to identify biomarkers of ASD that can be used in determining the causes of ASD, the brain mechanisms involved, early diagnosis, preventive interventions, and treatment. Lainhart’s research is funded in part by the National Institutes of Mental Health and the Autism Speaks Foundation.