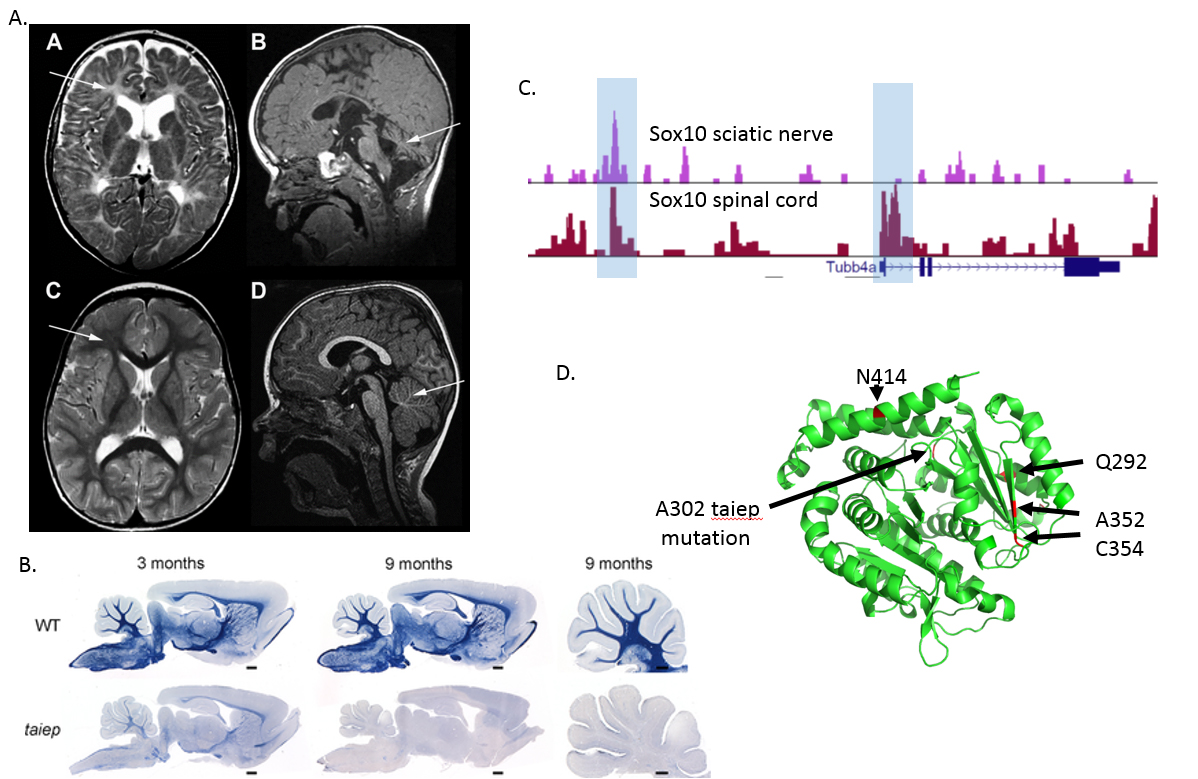 Title: Mutations in the TUBB4A Gene Cause a Hypomyelinating Leukodystrophy

Legend: A) White matter abnormities in a patient with a mutation in the beta 4 tubulin gene (Tubb4a), which causes hypomyelination with atrophy of the basal ganglia and cerebellum (H-ABC). B) The taiep rat exhibits a dramatic loss of myelin (stained in blue) at 3 months with virtual absence at later timepoints. C) The taiep mutation in the Tubb4a gene was identified in the rat chromosomal interval by using a binding profile of the Sox10 transcription factor, which is critical for myelination of the nervous system. Binding sites for the Sox10 transcription factor are highlighted in blue. D) The taiep mutation occurs in Ala302 in the TUBB4A protein. Other TUBB4A mutations causing  H-ABC are shown, including the N414 mutation associated with the patient shown in panel A.

Abstract: Objective – Our goal was to define the genetic cause of the profound hypomyelination in the taiep rat model and determine its relevance to human white matter disease.  Methods – Based on previous localization of the taiep mutation to rat chromosome 9, we tested whether the mutation resided within the Tubb4a (β-tubulin 4A) gene, because mutations in the Tubb4a gene have been described in patients with central nervous system hypomyelination. To determine whether accumulation of microtubules led to progressive demyelination, we analyzed the spinal cord and optic nerves of 2-year-old rats by light and electron microscopy. Cerebral white matter from a patient with TUBB4A Asn414Lys mutation and magnetic resonance imaging evidence of severe hypomyelination were studied similarly. Results – As the taiep rat ages, there is progressive loss of myelin in the brain and dorsal column of the spinal cord associated with increased oligodendrocyte numbers with accumulation of microtubules. This accumulation involved the entire cell body and distal processes of oligodendrocytes, but there was no accumulation of microtubules in axons. A single point mutation in Tubb4a (p.Ala302Thr) was found in homozygous taiep samples. A similar hypomyelination associated with increased oligodendrocyte numbers and arrays of microtubules in oligodendrocytes was demonstrated in the human patient sample. Interpretation – The taiep rat is the first animal model of TUBB4A mutations in humans and a novel system in which to test the mechanism of microtubule accumulation. The finding of microtubule accumulation in a patient with a TUBB4A mutation and leukodystrophy confirms the usefulness of taiep as a model of the human disease. Ann Neurol 2017;81:690-702.