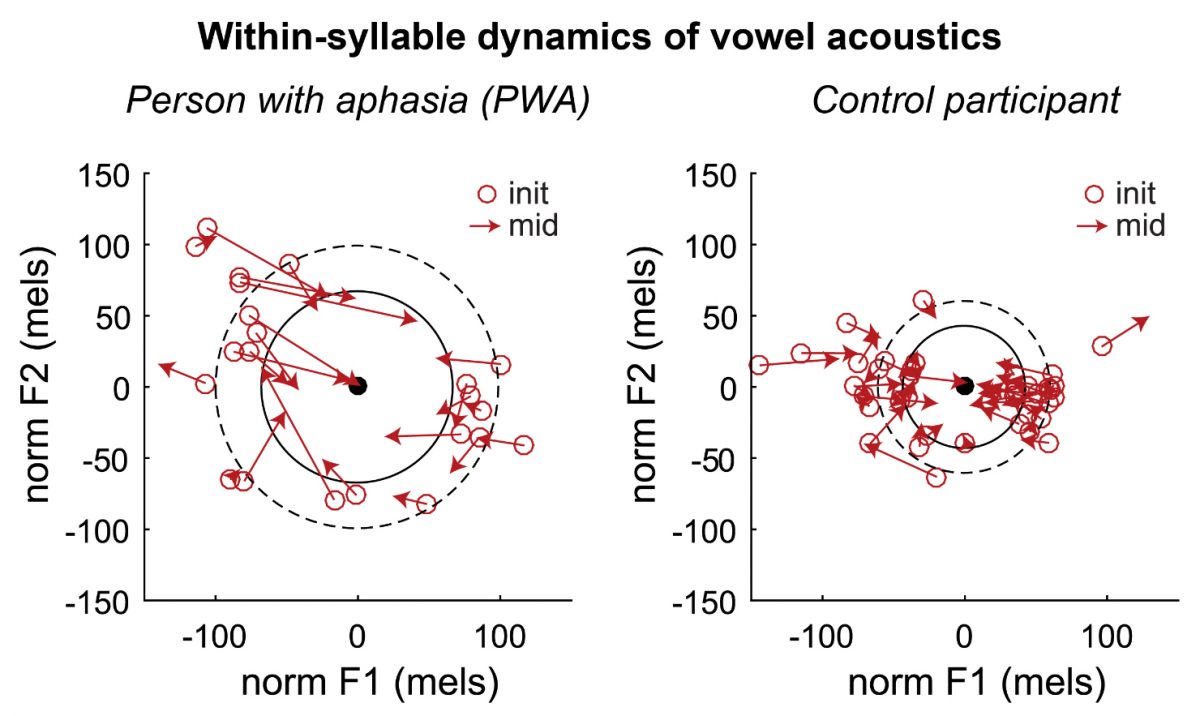 Legend: We investigated whether aphasia, a communication disorder caused by brain damage that typically affects higher-level language function, is associated with differences in vowel production. Here, repeated productions of a single vowel are compared in acoustic space between a representative participant with aphasia
(left) and a representative control participant (right panel). Each open circle and connected arrowhead indicates the acoustics of a single utterance; only the most variable 20% of utterances (farthest from the acoustic median) are shown. The open circle indicates the utterance at onset (first 50 ms), while the connected arrowhead indicates the same utterance at the vowel midpoint. The spread of these utterances at onset is greater for the individual with aphasia, at left, but both participants show an inward movement from onset to midpoint, reducing the acoustic variability within the syllable. This tendency for greater onset variability but preserved inward corrective vowel movement held over our sample of eight persons with aphasia.

Abstract: Disorders of speech production may be accompanied by abnormal processing of speech sensory feedback. Here, we introduce a semi-automated analysis designed to assess the degree to which speakers use natural online feedback to decrease acoustic variability in spoken words. Because production deficits in aphasia have been hypothesised to stem from problems with sensorimotor integration, we investigated whether persons with aphasia (PWA) can correct their speech acoustics online. Eight PWA in the chronic stage produced 200 repetitions each of three monosyllabic words. Formant variability was measured for each vowel in multiple time windows within the syllable, and the reduction in formant variability from vowel onset to midpoint was quantified. PWA significantly decreased acoustic variability over the course of the syllable, providing evidence of online feedback correction mechanisms. The magnitude of this corrective formant movement exceeded past measurements in control participants. Vowel centering behavior suggests that error correction abilities are at least partially spared in speakers with aphasia, and may be relied upon to compensate for feedforward deficits by bringing utterances back on track. These proof of concept data show the potential of this analysis technique to elucidate the mechanisms underlying disorders of speech production.

About the Lab:  The Niziolek lab studies how the feedback system functions in persons with aphasia, many of whom have deficits in speech production and error awareness. They are developing laboratory studies of speech skill learning that can be translated to training interventions for speakers such as these who have trouble consistently producing auditory targets. The lab’s proposed training consists of vocal games that map speech to a real-time visual display. These visual speech training games have the potential to be adapted into tools to improve speech production in individuals with speech impairment, including deaf speakers and children with developmental speech and language disorders.