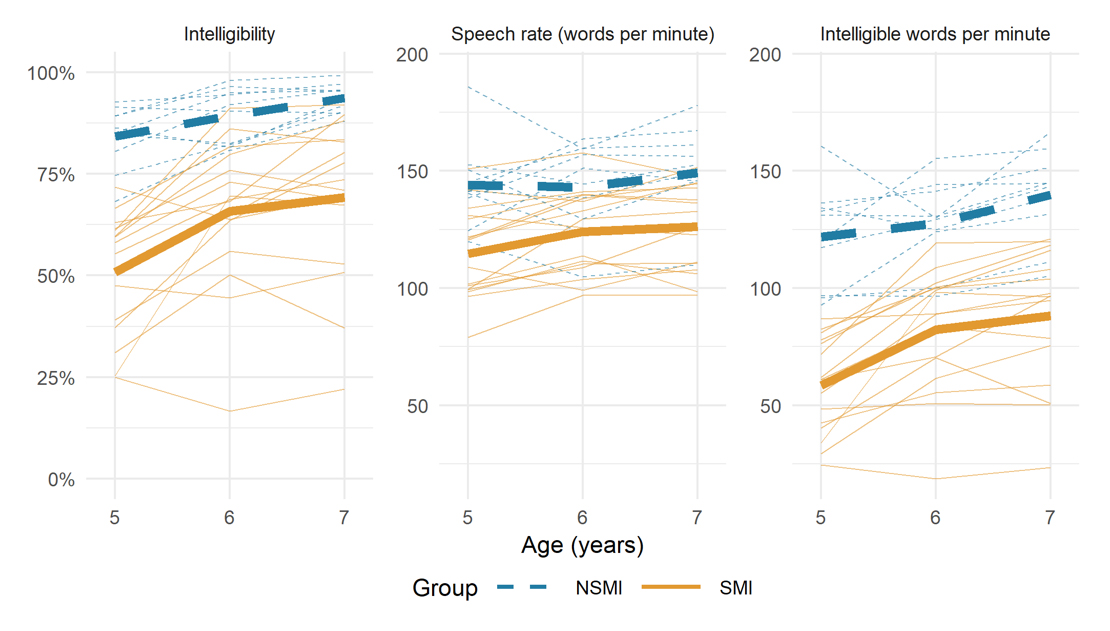 Title: Longitudinal Change in Speech Rate and Intelligibility between 5 and 7 years in Children with Cerebral Palsy

Abstract: Purpose: We examined growth between 5 and 7 years in speech intelligibility, speech rate, and intelligible words per minute (IWPM) in three groups of children: those who were typically developing (TD), those with cerebral palsy (CP) and clinical speech motor impairment (SMI), and those with CP and no speech motor impairment (NSMI).  Method: Twenty-six children with CP, 16 with SMI and 10 with NSMI were each seen at 5, 6, and 7 years of age. A cross-sectional group of 30 age-matched TD children, ten in each age group, were included as controls. All children produced a corpus of utterances of 2–7 words.  Results: All groups of children showed increases in intelligibility and IWPM between 5 and 7 years. Only children with SMI showed increases in speech rate over time. Patterns of change were similar for children in the TD and NSMI groups but different for children in the SMI group.  Conclusions: The window of time between 5 and 7 years is an important period of growth for production of connected speech where nearly all children, regardless of group, made significant changes in speech intelligibility and IWPM. Interventions focusing specifically on enhancing intelligibility in this age range may help facilitate even further growth in children with SMI, who still had marked intelligibility reductions at 7 years of age.

About the Lab: Katherine Hustad is Professor and Chair of Communication Sciences and Disorders.  Her research examines speech and language development in children with cerebral palsy, with a focus on improving treatment decision-making, clinical outcomes, and quality of life.  Visit the Wisconisn Intelligibility, Speech, and Communication (WISC) Lab for more information.  https://kidspeech.wisc.edu/