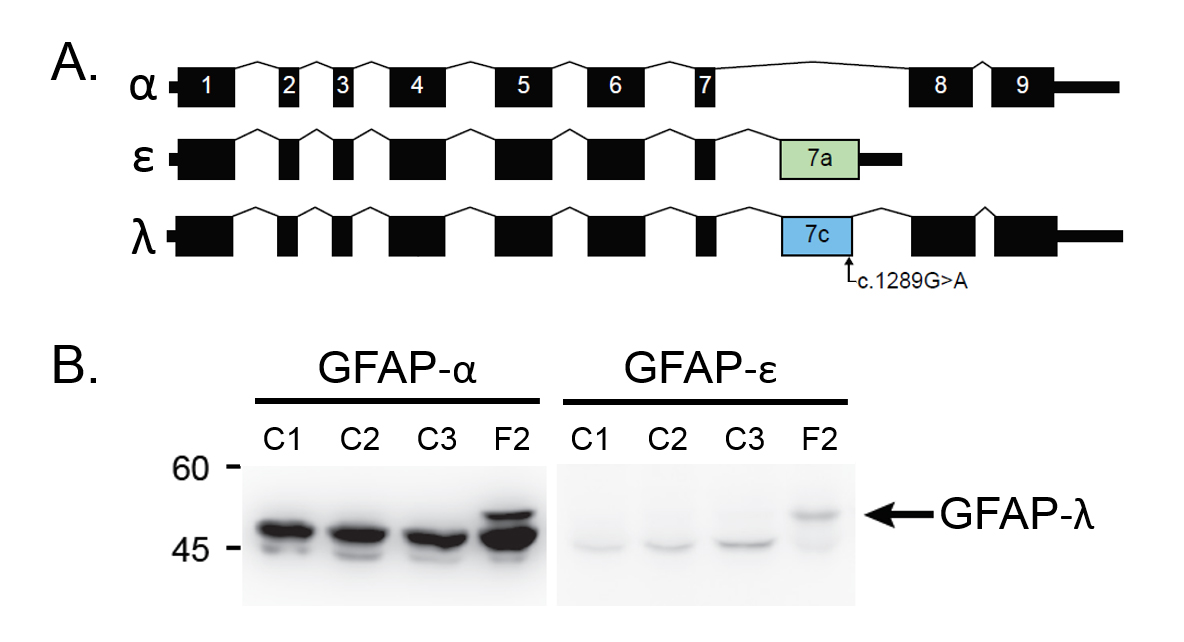 Title: Shift in alternative splicing of GFAP as a novel cause of Alexander disease

Legend: A – Alternative splicing of the GFAP transcript leads to multiple isoforms. In normal brain, about 90% is α and 10% is ε. Newly discovered variants in exon 7c (one shown) lead to a marked increase of an isoform that is typically present in only trace amounts, termed λ. B – Western blotting of brain from patients with Alexander disease, three with known pathogenic variants in the α isoform (C1, C2, C3) and one with a new variant in exon 7c that increases production of the λ isoform (F2). A larger molecular weight band, present only in the patient with the variant in exon 7c, is recognized by both α-specific (left) and ε-specific (right) antibodies.

Abstract: Alexander disease results from gain of function mutations in the gene encoding glial fibrillary acidic protein (GFAP). At least eight GFAP isoforms have been described, however, the predominant alpha isoform accounts for approximately 90% of GFAP protein. We describe exonic variants identified in three unrelated families with Type II Alexander disease that alter the splicing of GFAP pre-mRNA and result in upregulation of a previously uncharacterised GFAP lambda isoform (NM_001363846.1). Affected members of Family 1 and Family 2 shared the same missense variant, NM_001363846.1:c.1289G>A;p.(Arg430His) while in Family 3 we identified a synonymous variant in the adjacent nucleotide, NM_001363846.1:c.1290C>A;p.(Arg430Arg). Using RNA and protein analysis of brain autopsy samples, and a mini-gene splicing reporter assay, we demonstrate both variants result in upregulation of the lambda isoform. Our approach demonstrates the importance of characterizing the effect of GFAP variants on mRNA splicing in order to inform future pathophysiologic and therapeutic study for Alexander disease.

About the Lab: The Alexander Disease lab is focused on understanding developmental and pathological aspects of glial cell biology in the nervous system of the mouse, with a particular focus on astrocytes and their major intermediate filament protein, GFAP. Main strategies involve genetic manipulation of glial gene expression using transgenic techniques, and gene targeting in embryonic stem cells to generate mutant strains of mice. Current projects address a variety of topics, such as regulation of gene expression, and the role of GFAP mutations and accumulation in the pathogenesis of AxD. A major effort is devoted to devising novel therapeutic strategies for treatment of this disorder, and identifying biomarkers to permit monitoring severity or progression of the disease.